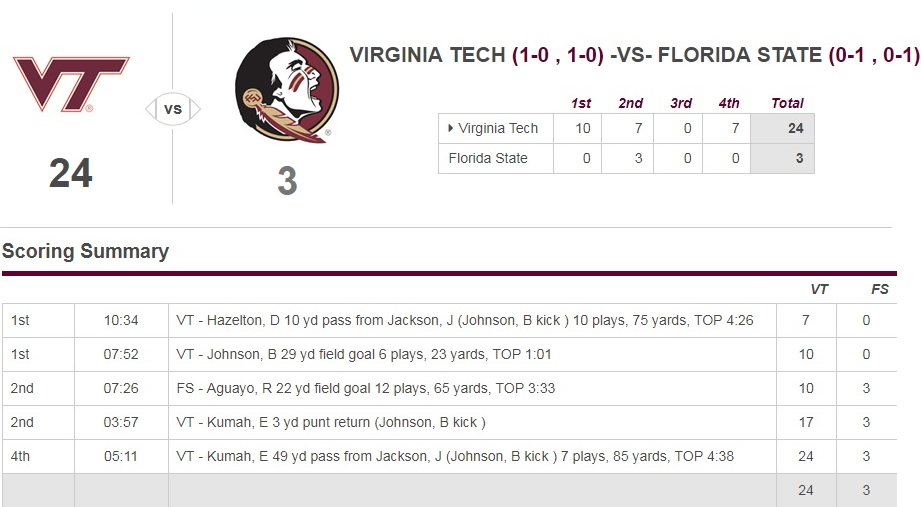 TALLAHASSEE, Fla. — A mock tomahawk chop broke out late in the fourth quarter in a robust Virginia Tech fan section at Doak Campbell Stadium on Monday night. As the closing seconds of the 20th-ranked Hokies’ 24-3 win over No. 19 Florida State wound down, the chant and cheering grew louder and louder.

Foster has been around for all the big games against the Seminoles, the national championship loss in 2000, the ACC Championship setback in 2005, all those big games that always seemed to go FSU’s way.

To see his inexperienced defense, with only four returning starters from last year and a host of first-year contributors, dominate Florida State on the road in a season opener the way his unit did gave him joy that few performances could.

“This was always the team and the program you were chasing,” said Foster, who is in his 32nd year on Tech’s staff. “I’m not saying we haven’t caught them yet, but it’s gratifying tonight to come down here with a group of no names so to speak and we stepped up.”

In front of 75,237 fans and a nationally-televised audience, the Hokies broke a six-game losing streak in Tallahassee. Their last win here came in 1974, when Foster was in high school.

“I didn’t know that, but I guess tonight we changed that for him,” said Tech senior defensive tackle Ricky Walker. “Coach Foster deserves it.

“He’s the man. Coach Foster, on the sideline he was calm and kept his composure the whole time. He waited until the clock hit zero to finally smile and tell people congratulations. Hats off to coach Foster, because he had a great game plan, and as you can see we smothered those guys.”

The Hokies choked out the Seminoles’ offensive attack, which was supposed to be potent in first-year coach Willie Taggart’s “Gulf Coast” system. While it’s true it takes time for a team to get acclimated to a new coaching staff and new system, this was a beating that was hardly expected by those outside the program.

Those inside the program? Well, that’s a different story.

“I’m not surprised the defense had a good game because we’ve been working very hard since January,” said Tech freshman cornerback Caleb Farley. “I know we’re young, but we have a lot of faith in each other and faith in our coaches. Coach Foster is the best coach in America.” 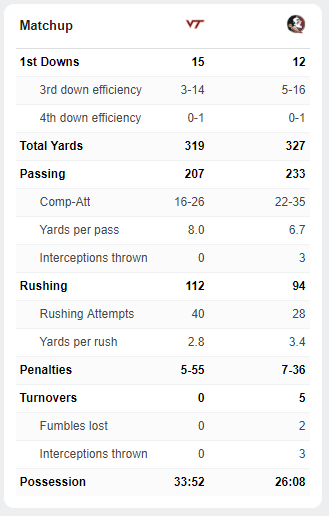 “We felt very prepared with practice leading up to this game. It was like a glorified practice,” Farley said.

The Hokies deserve much of the credit for keeping FSU out of the end zone, but they had some breaks fall their way as well.

In the fourth quarter, Seminoles fleet-footed tailback Cam Akers broke off an 85-yard run, but was chased down by Hokies cornerback Bryce Watts at the Tech 6-yard line. A few plays later, the Seminoles botched a handoff from Akers, who was lined up as a wildcat quarterback, to running back Amir Rasul.

“We didn’t do what we were supposed to do. Cam was indecisive on whether to keep it or give it,” Taggart said. “We had it where we wanted and we didn’t execute. I think a lot of what happened today was a lack of execution.”

The defensive masterpiece masked an imperfect performance by the Hokies’ offense.

Tech had its moments, but it squandered some prime scoring opportunities as well. One instance was a failed fourth-and-goal from the FSU 1 in the third quarter.  The Hokies gave the ball to tough-running tailback Steven Peoples, but he was stopped short of the goal line to give possession to the Seminoles.

“We had great field position the majority of the game. It was just a lot of times we couldn’t capitalize,” Tech sophomore quarterback Josh Jackson said. “We feel like we could have scored a lot more, but I’m definitely happy with what we did. Our defense played great. Three points and [five] turnovers, so that’s a great job.”

Jackson completed 16 of 26 passes for 207 yards and two touchdowns, a 10-yard strike to wideout Damon Hazelton in the first quarter and a 49-yard completion to receiver Eric Kumah in the fourth.

The Hokies, who led 10-0 midway through the first quarter, were out-gained 327-319 and converted only 3 of 14 third downs, but they avoided any turnovers and held the ball for almost eight minutes more than the Seminoles.

“It certainly wasn’t perfect by any means, but to play as hard and as intelligent as I felt like we played, by and large with a couple of exceptions, I was awfully proud of our staff and of our players to find a way to get a victory,” Tech head coach Justin Fuente said.

With retired coach Frank Beamer in attendance — he and former FSU head whistle Bobby Bowden were honorary captains and participated in the pregame coin toss — it was only fitting that special teams were major contributors to the blowout victory.

BeamerBall made yet another appearance when Chris Cunningham blocked a second-quarter punt that Kumah returned for a touchdown and a 17-3 lead.

“I’ve always wanted to block a punt,” Cunningham said. “I just told myself, ‘I’m going to get one today.'”

Virginia Tech will return to action on Saturday when they host William & Mary in Lane Stadium.  Kickoff is scheduled for 2pm, and the game can be seen online on ACC Network Extra. 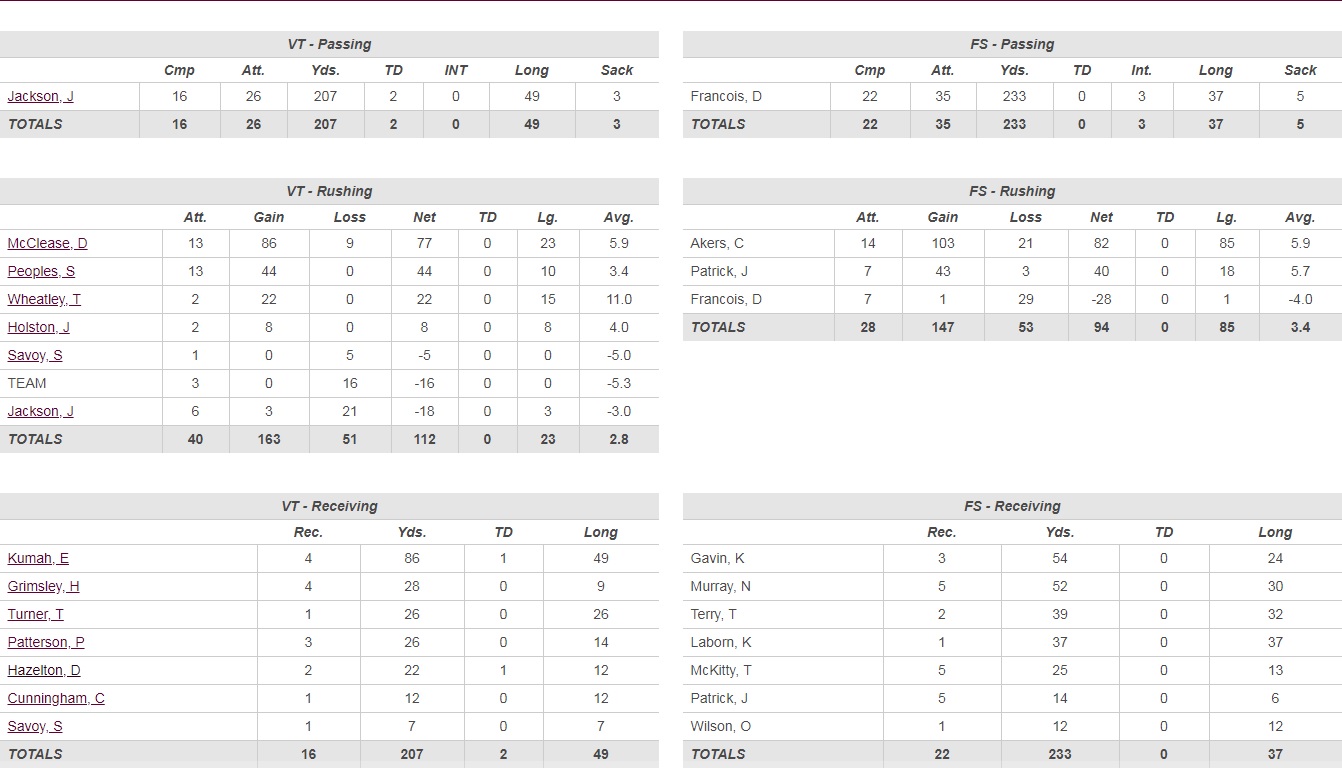