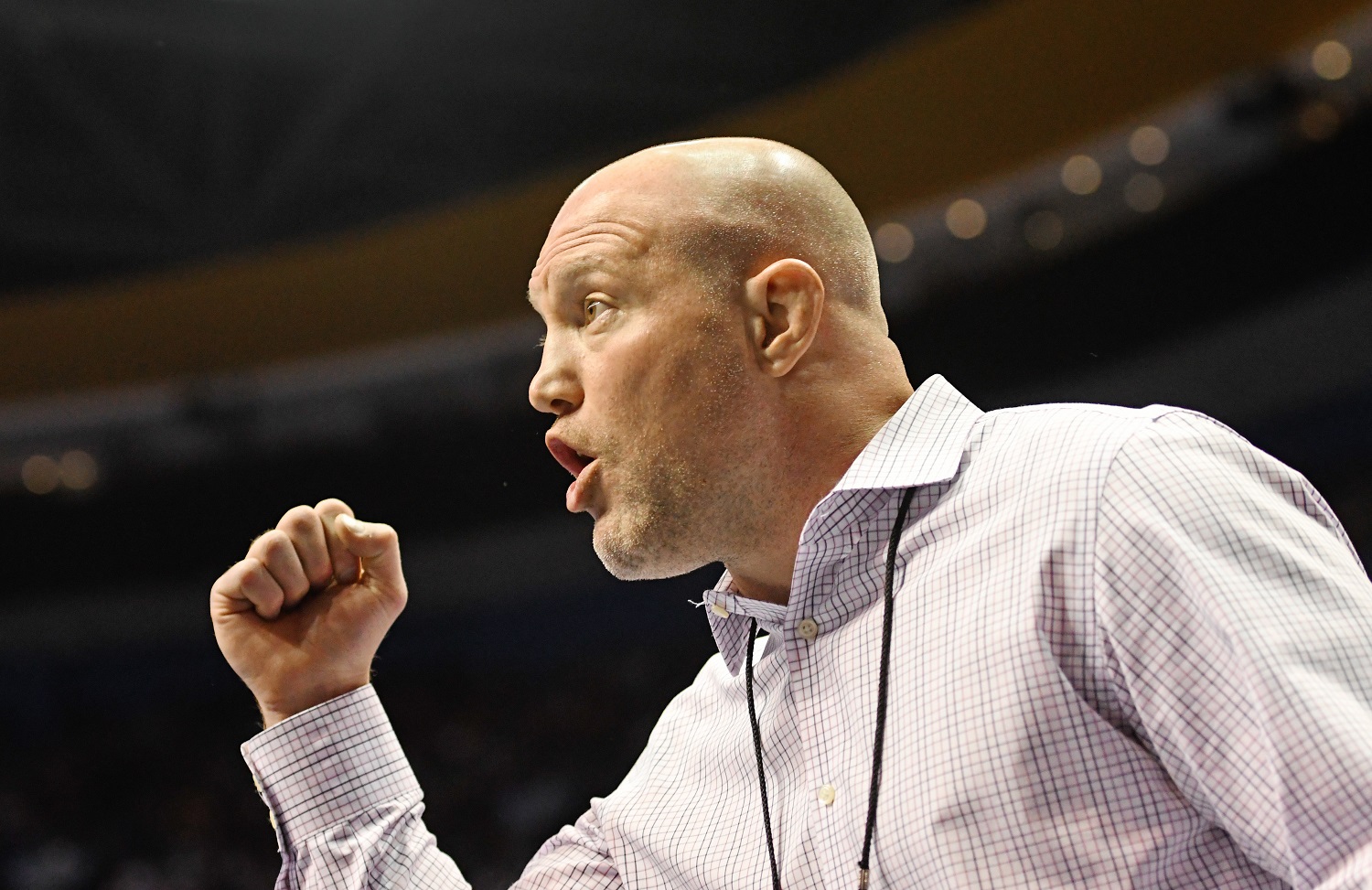 For parts 2 and 3 of our recent interview with Virginia Tech Wrestling Coach Tony Robie, we turned things over to the fans on our Wrestling Message Board and asked them for the questions they’d like Robie to answer. We couldn’t ask them all due to time constraints, but we did get some good answers and feedback.

In this part, Robie gives us information on the 2018-19 matchups and reminiscences great past individual and team wins.

We indicate which message board poster asked the question, and follow-up/clarification questions asked by TechSideline.com are noted by “TSL.”

Note: This is the final part of an interview that was conducted on May 14.

vivitron73: Who do we have on the schedule for next year, and when will the full schedule be released?

Tony Robie: We can’t finalize our schedule until ACC basketball comes out with dates and times, which I don’t believe they have yet, for the ACC men’s and women’s basketball schedule. We wait until that is complete.

What I can tell you is we’ve added Cornell to our home schedule. Cornell is a really strong wrestling team, top ten or top five in the country every year. So we’ll have them at home next year. We are hosting the ACC Championship at home, which is really cool. We’re really excited about that. My goal is to have 8,000 people at that, and that’ll be in Cassell.

We are going to go on the road and wrestle at Missouri, at Northwestern, at Lehigh. Within the ACC, we’ve got NC State at home, Pitt at home, and UVA at home. Princeton is coming down, and we’re trying to potentially add one more home bill. We’ll have at least six home dual meets, and then also the ACC Championship.

Sponsored by the YMCA at Virginia Tech: Experience this VT football season as a VIP and support an organization that has been serving in the VT community and beyond since 1873! The YMCA at Virginia Tech is raffling two sets of 2 premium season tickets for the 2018 Virginia Tech home football games. Each prize package is worth $5,000 and includes two club-level seats, elevator access, seat-back chairs with cup holders, access to an indoor lounge with concessions, private restrooms, and a premium tailgate parking space at Lancaster House, a short 5 minute walk from Lane Stadium. Click here to buy tickets.

Robie: Ethan is from Guam. He wrestles on the Guam national team, but really, his role here, he’s an administrative person. He does wrestle competitively, but that’s his own deal. For us, with the Southeast Regional Training Center, and with Virginia Tech Wrestling, he helps us. His title is the Volunteer Director of Operations.

TSL: Will he be on the mat, practicing?

Robie: He works out. He can’t practice during our [Virginia Tech Wrestling] practices, but during Southeast Regional Training Center practices, yes. He’s in Guam currently, competing at their national championships.

HokieLifer2: Name one wrestler that VT fans might not know, but should be excited about.

Robie: Some guys that I think are going to be good … Stan Smeltzer, I think has got a bright future, but wasn’t a particularly heralded wrestler coming out of high school. He was a two-time state champion out of Smithfield High School. He had a pretty good year as a redshirt for us. I’d say Stan Smeltzer or Tom Sleigh. [Sleigh] is a graduate transfer who’s coming in out of Bucknell. He’s a three-time NCAA qualifier. I’m excited to get Tom on campus. He’s going to get his graduate degree in Business Analytics from Virginia Tech, and I think he’s a tremendous addition to our program for next year. He’ll be wrestling at 197.

HokieLifer2: You have four active wrestlers on the international circuit (Molinaro, Graff, Walz, and Aguigui), with Frayer often traveling with them. What type of additional burden does that place on you? How do workouts go in their absence?

Robie: It really hasn’t created that much more travel for Coach Frayer. Really, the only place he’s gone with those guys to coach them was the U.S. Open, and both myself and Jared [Frayer] were out there, because we had guys competing in the Junior Open, which is at the same time.

I wouldn’t say it’s really created much more of a burden on me at all. Coach Frayer runs all of our freestyle practices, so if anything, it creates more work for him, but it’s part of having a high-level program.

VTraised: Besides donating to the SERTC, what from your perspective can Hokie Nation do to help continually build the program?

Robie: Show up at matches!

VTraised: How old were current VT wrestlers when the staff first made recruiting contact with them?

Robie: NCAA rules allow us to make contact with kids … we can’t contact them before September 1st of their junior years. Then we can call, text unlimited, we can go see them at their house or their high school. Then starting the following fall, they’re able to come on their official visits.

TSL: My guess is that you generally have guys you have identified, and at that point in time, you reach out to them.

Robie: In the end, that fluid kind of process, kids come and go into your recruiting board.

VTraised: It’s Monday morning before the NCAA Championships begin on Thursday. How many pounds over are most NCAA wrestlers that qualified?

Robie: (laughs) The guys who are going to do well, not much. Four or five pounds over.

VTraised: What’s the best win by a Virginia Tech wrestler this past year? … EVER in your time here?

Robie: The best win this past year was probably Brent Moore over Kevin Jack of NC State in the ACC finals. [Moore, a freshman, lost to Jack, a senior, two-time defending ACC Champion, 15-0 in a dual meet in February, but later beat Jack 6-4 for the for the 141-pound ACC championship.]

The best individual win in my time here at Virginia Tech [since 2006] … [long pause] … I would say probably the best win, because of the situation, was Devin Carter, when he had a torn hamstring, advancing to the NCAA finals. What he did, given those circumstances was as impressive as almost anything I’ve seen in the sport of wrestling. The kid tore his hamstring in December. It’s a six-month recovery before you can do anything, and he was competing three, three and a half months later. He won the ACC, and made it to the NCAA finals. That was Devin’s junior year, so 2014.

He beat a guy [UNC’s Evan Henderson in the NCAA semi-finals] that he had beaten several times in his career, but nonetheless, with that injury, it was ridiculous. He tore two of the three muscles off his bone, and they stapled them back together in late December, and he wrestled at the ACC Championships in early March.

TSL: Devin has a distinction on TechSideline.com, after this wrestling career was over, he went on our message boards and just said thanks for everything, and that is one of the highest-rated posts of all time on Tech Sideline.

VTraised: Which team ACC title was the sweetest for you, and why?

Robie: Probably this year, just because it was my first year as head coach, and I don’t think a lot of people thought we were going to win.

There was another, I don’t remember what year it was, it might have been our first ACC championship. I think Maryland was still in the conference. We were down by, I think, twenty points or something going into the finals. UVA had, I think eight finalists, and we had seven, and we won six of seven matches in the finals and ended up winning. It came down to the heavyweight finals match, a kid named David Marone won for us to win our first ACC title. That was pretty cool, too, that would be a close second.

[Editor’s note: as this article about the 2013 ACC Championships details, Robie’s memory is close but not exact:

Virginia held a 10-point lead over the Hokies heading into the final round and had eight wrestlers competing in the 10 weight class championships to Virginia Tech’s six.

Robie remembers correctly that Virginia Tech’s David Marone won the final match and the championship for the Hokies, their first, by defeating Virginia’s Derek Papagianopoulos 8-0.]

TSL: That’ll do it. Thanks for your time, Coach.

Robie: Sure, I appreciate you doing the interview.

Click here for all three parts of the interview.