Thanks to results at the ACC Outdoor Track and Field Championships over the weekend, Virginia Tech beat in-state rival UVA in the Commonwealth Clash for the second consecutive year.  That’s an outstanding achievement for an athletic department that spent decades with no true conference home, especially coming against a University of Virginia athletic department that is known for having lots of success in the non-revenue sports.

The Commonwealth Clash is a head-to-head competition between Virginia Tech and UVA across all sports.  The Hokies won the competition for the first time in 2016-17, though the final score was a tie that had to be broken by the official tiebreakers.

According to the HokieSports.com recap, here is how the Hokies won it for the first time last year…

“The season series ended tied at 11, but the Hokies won the tiebreaker after winning four of the Atlantic Coast Conference team championships in sports in which both schools compete. Tech claimed the titles in both men’s and women’s outdoor track and field, men’s indoor track and field, and wrestling. Virginia won ACC titles in men’s tennis, field hockey and rowing. The Hokies do not compete in the latter two sports.”

Virginia Tech also won the 2017-18 competition, though the end wasn’t quite as dramatic.  As a result of the men’s and women’s track and field teams finishing ahead of the Hoos at the ACC Championships, the Hokies won the Commonwealth Clash by a fairly convincing score of 12.5-8.5.

The final score has been trending in Virginia Tech’s direction since the competition began back in 2014-15.

Here is how the competition broke down across all sports in 2017-18.  First, a table with Virginia Tech’s victories… 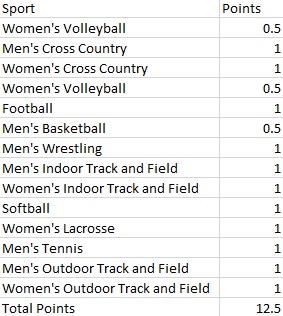 And now, a table with UVA’s victories… 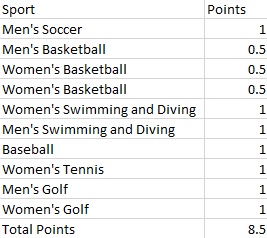 Clearly the Hokies have made major strides across all sports over the last few years.  In fact, as of April 26, Virginia Tech was No. 20 in the Directors’ Cup standings.  That doesn’t count the points that will be picked up by lacrosse in the NCAA Tournament, or what the track teams do at the nationals.  In the same April 26 ranking, UVA was tied for No. 24 in the Directors’ Cup, though the Hoos will pick up more points between now and the end of the season as well.

Several Whit Babcock hires had a direct effect on this season’s success against UVA.  Buzz Williams managed to split the men’s basketball series with the Hoos for the third consecutive season.  Jill Wilson’s women’s volleyball team swept UVA in both games, giving the Hokies a full point.  John Sung’s women’s lacrosse team defeated No. 17 UVA in Lane Stadium, again giving Tech a full point.  And of course, Justin Fuente has picked up where Frank Beamer left off on the gridiron.

Does all that mean that Virginia Tech has a better all-sports athletic department than the Hoos?  No, certainly not.  UVA has multiple National Championships, and they offer more sports than the Hokies, such as men’s and women’s squash, men’s lacrosse, and women’s rowing.  However, it’s accurate to say that Virginia Tech has closed the gap across all sports since joining the ACC, and they’ve especially closed the gap since the Commonwealth Clash was introduced back in 2014-15.

Let’s compare the expenditures of each athletic department, per the financial report article written by Randy Jones and published by TSL on April 26, 2018.  These numbers are for the 2016-17 fiscal year.

From purely a head-to-head standpoint, Virginia Tech got more bang for its buck in the 2016-17 fiscal year, when they won the Commonwealth Clash for the first time.  We don’t know the 2017-18 numbers yet, but it’s likely that Whit Babcock got more bang for his buck this year as well.

As far as direct expenditures on the two revenue sports, here is how the two athletic departments stack up…

The Hokies clearly get more out of their football expenditures than the Hoos.  Meanwhile, despite all the good work that Buzz Williams has done with Virginia Tech’s basketball program, UVA is getting more out of Tony Bennett and his staff.

From a total salary perspective, UVA spends a lot more money.  The following numbers are total salaries in both athletic departments, including benefits and bonuses…

Virginia does offer more sports than Virginia Tech, but not enough to create a $24.6 million gap.  I assume that UVA pays a higher salary for their Olympic Sports coaches.  For example, here is the comparison between Tech and UVA in women’s soccer…

That’s just one example, and there are certainly many others.  Virginia Tech baseball coach John Szefc made $425,000 as of January 1, 2018.  UVA baseball coach Brian O’Connor was making over $600,000 per year.  In general, the Hoos seem to invest more in the coaching staffs of their non-revenue sports.  That has paid off in terms of wins and National Championships over the years.  However, as this year’s head-to-head results show, Virginia Tech is closing the gap, and they are doing so with a smaller budget, and with smaller coaching investments in non-revenue sports.

It will be interesting to see how new UVA athletic director Carla Williams approaches football.  Williams is a Georgia graduate who spent nearly 15 years in the athletic department at her alma mater.  In fact, she was the administrator in charge of football when Georgia hired Kirby Smart.  She’s been around big-time football nearly all her adult life.  Will she look at the amount of money UVA spends on football in relation to Virginia Tech and decide to make a change? If so, where will the money come from, considering the UVA athletic department ran over $7 million in the red in the 2016-17 fiscal year?  Will it come at the expense of some Olympic sports, and how angry would that make some portions of a UVA fan base that prides itself in performance in the non-revenue sports?

These are interesting times at both schools.  The Hokies, thanks to stable ACC membership and some good hires by Whit Babcock, have closed the gap.  We’ll have to wait and see how UVA responds under new leadership.