After Tremaine and Terrell Edmunds were selected in Round 1 of the NFL Draft on Thursday, things were quiet for Hokie Nation in Rounds 2 and 3 on Friday. But on Saturday, three more Virginia Tech players were selected:

Some draft prognosticators had Settle going as early as the second or third round, and in a phone conversation Wednesday, Settle’s agent, Andy Ross, told me the Redskins were very interested and might take him in the third round. The Redskins satisfied their need for a stud defensive tackle when they selected Da’Ron Payne out of Alabama No. 13 overall, but when Settle was still available in Round 5, the ‘Skins had their cake and ate it, too.

Fantastic fit for #VirginiaTech DT Tim Settle with the #Redskins.

If they hadn't taken Da'Ron Payne earlier, he might've been their pick on Day 2.

In the fifth round, the Redskins selected defensive lineman Tim Settle with the 163rd overall choice. He's a player they liked for a while but most projections had him going in the third round. To get him here provides excellent value. https://t.co/9Uaim7q91c

As the No. 163 pick overall, Settle’s rookie contract will be worth approximately $2.6 million with a $187k signing bonus, per spotrac.com. That leaves it up to fans to debate for years if Settle was wise to leave after just his redshirt sophomore season, but the truth is that Settle was always on a fast track for the NFL, telling TechSideline.com back in January “My goal was to be three and out when I came into college.”

Wyatt Teller’s selection by the Buffalo Bills continues a long-standing fascination by the Bills with the Hokies. Bruce Smith was the No. 1 overall pick by Buffalo back in 1985, and he carved out a Hall of Fame career with the Bills, but that’s hardly the start of it.

Ten Hokies have been drafted by Buffalo over the years, if you count the selection of Frank Ballard in 1948 by the Buffalo Bills of the All-America Football Conference (okay, that’s a stretch):

If you exclude Ballard’s selection by the AAFC Bills, then the NFL Buffalo Bills are tied with the Atlanta Falcons for most Hokies drafted, with nine.

That doesn’t even count former Hokies who weren’t drafted by the Bills, but had good stints with them, like the late Keion Carpenter (three years), Pierson Prioleau (four years), and Tyrod Taylor (three years). Former Hokie QB Logan Thomas is currently with the Bills as a tight end.

#Bills really needed offensive line help. They got a nasty mauler in Wyatt Teller. I wouldn't be surprised if he's starting and protecting Josh Allen this season.

Greg Stroman’s late selection by the Washington Redskins completes a remarkable turnaround for the popular, multi-talented, underrated player who will be missed in Blacksburg.

In 2015, Stroman was a pedestrian defensive back, thrust unexpectedly into a starting role against East Carolina, where he was targeted and roasted in an embarrassing loss to the Pirates.

In the following years, Stroman turned into a stellar punt returner for the Hokies, taking back four punts for touchdowns, tied for second in Virginia Tech history behind only DeAngelo Hall with five. Stroman had 1,108 yards on punt returns in his career, second only to Eddie Royal’s 1,296 yards.

But most spectacular was Stroman’s improvement as a cover corner. Stroman became a reliable pass defender for the Hokies, and in his senior year, statistically he was one of the best cover corners in the country. 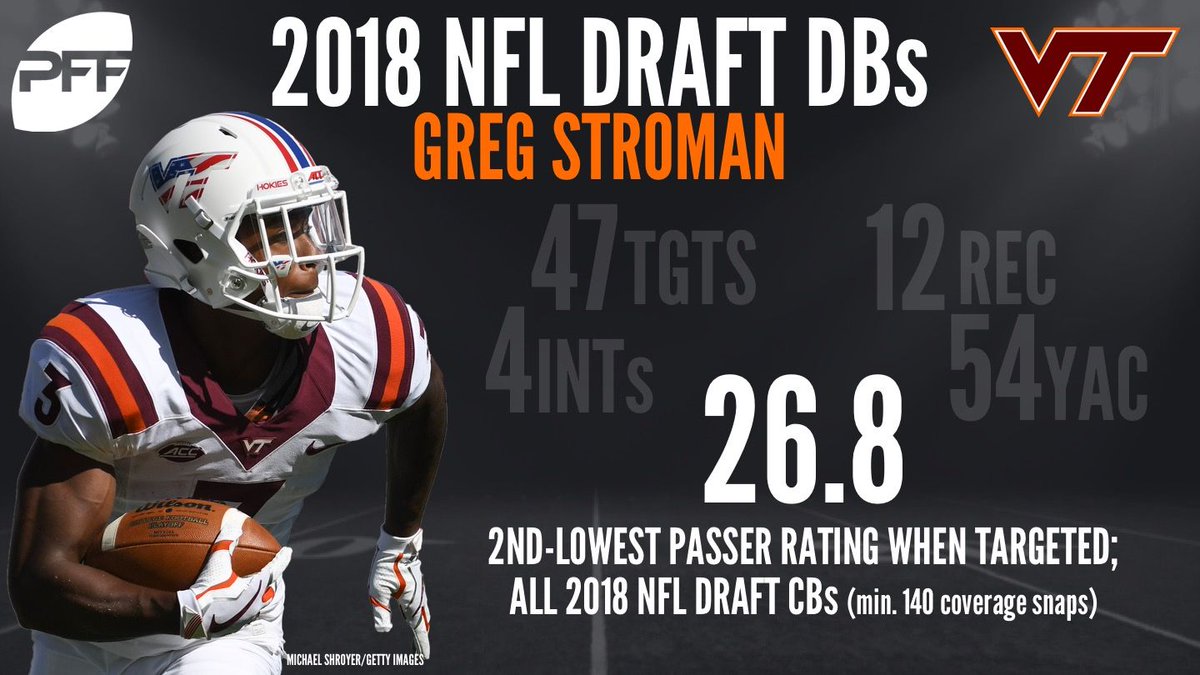 Settle and Stroman are the seventh and eighth Hokies to be drafted by the Redskins, who have drafted four Hokies in the last four years: Kyshoen Jarrett (2015), Kendall Fuller (2016), and now Settle and Stroman.

Of note: Settle and Stroman are both high school graduates of Stonewall Jackson HS in Manassas, VA. If they both play for the Redskins this fall, they will pull off the rare hat trick of playing for the same high school, college, and NFL teams.