Virginia Tech has punched their ticket to the 2018 NCAA Tournament.  Now it’s time for the Hokies to get greedy and improve their seeding.  Both Joe Lunardi and Jerry Palm currently have Tech as a No. 8 seed, and by taking a look at Palm’s detailed bracket index, we can see that they have the ability to move up.

Here’s a screenshot of all of Palm’s teams seeded from No. 6 through No. 8, along with parts of their resumes. 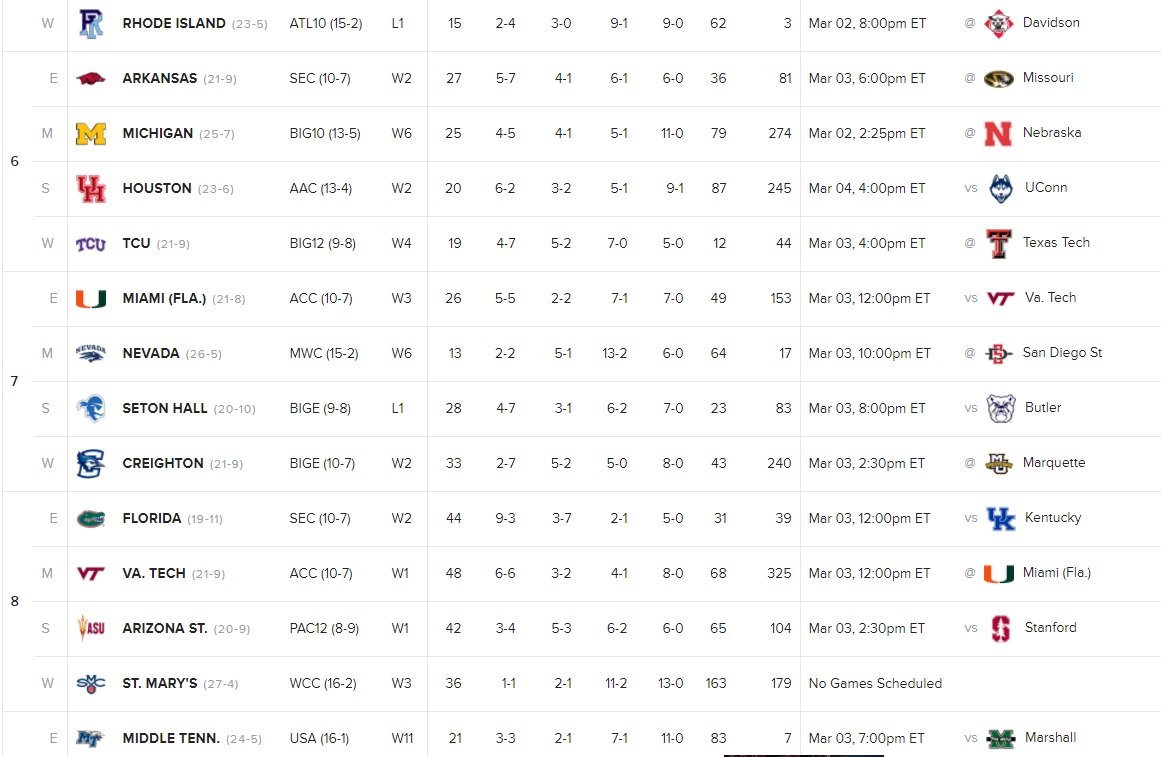 The Hokies don’t quite match up when it comes to RPI, but they have six Quadrant One wins (Washington moved back into the top 50 after their win last night), and could pick up a seventh on Saturday.  The Hokies could also move up to around No. 40 in the RPI with a road win.  We could see Tech displace a team like Creighton based on quality wins.

But for that to happen, the Hokies need a win at Miami on Saturday.  The Hurricanes defeated the Hokies 84-75 in Cassell Coliseum back on February 3.  It was that game that caused Buzz Williams to completely change his team’s defensive and practice philosophies in the middle of the season.  It also caused Devin Wilson to be inserted into the starting lineup over Ahmed Hill.

Since that loss, the Hokies have a 5-2 record, and that includes wins over No. 2 UVA, No. 5 Duke and No. 15 Clemson.  The Hurricanes have gone 4-3 in that span, and though they got a huge win over UNC on Tuesday night, they don’t seem to be quite as good without Bruce Brown in the lineup.  Here are their results since beating the Hokies in Blacksburg…

Thanks to their victory over the Tar Heels, the Hurricanes enter Saturday’s game on a three-game winning streak, and like the Hokies they are looking to improve their seeding for the ACC Tournament and the NCAA Tournament.  However, the Canes haven’t been great at home recently.  In their last three home contests, they were defeated by Virginia and Syracuse, and barely got by Boston College.  Meanwhile, Virginia Tech has a 5-3 road record in ACC play this year.  If they knock off Miami on Saturday, they’ll finish with a better ACC road record (6-3) than home record (5-4).

The Hurricanes haven’t been dominant in any phase of the game.  Rather, they are solid across the board, though overall they have been slightly better defensively than offensively.  That wasn’t the case in their 84-75 victory over the Hokies, however, or their 91-88 win over UNC this week.  This team is capable of scoring if the need arises, though I’d expect a lower scoring game than we got back on February 3.

As he’s done the last seven games, Buzz Williams will design his defense to prevent the ball from getting into the post.  Teams are being forced to shoot an exceptionally high number of three-pointers against the Hokies, and that has helped Tech pick up a lot of wins.  The Hurricanes are a middle-of-the-pack three-point shooting team.

Thanks to Virginia Tech’s newfound ability on the defensive end, this game will likely be lower scoring than the first meeting.  The Hokies have allowed an average of 65.8 points per game since losing to Miami, including just 62.4 points per game in their five victories.

If the Hokies defeat the Hurricanes, Tech will be either the No. 3, No. 4 or No. 5 seed in the ACC Tournament.  If they lose, they will be the No. 7 seed.  For a guide to Tech’s ACC seeding scenarios, see this article.