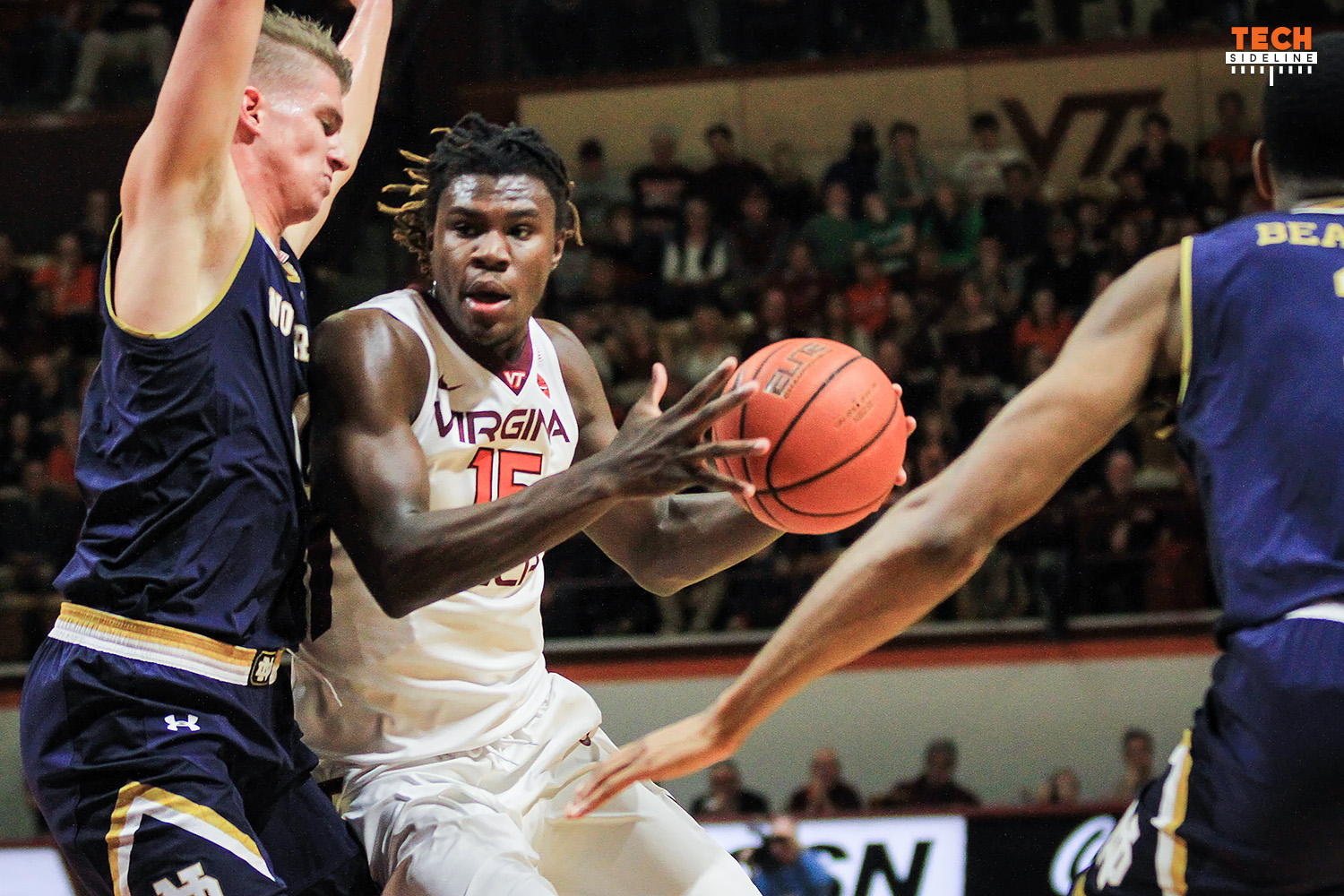 Tonight represents a great opportunity for the Virginia Tech Hokies, as they travel to South Bend to take on injury riddled Notre Dame.  The slumping Irish will be without two of their top players due to injury, and the Hokies will have a chance to steal a critical road victory.

Here are the key facts about both missing players…

PF Bonzie Colson: The undersized Colson is one of the best players in the ACC.  He was averaging 21.4 points and 10.4 rebounds per game before he was lost for the regular season with a broken foot.  Colson also leads Notre Dame in blocks (33) and steals (28).

PG Matt Farrell: The senior point guard is Notre Dame’s second leading scorer at 16.3 points per game, and he also leads the team in assists with 84.

Notre Dame wasn’t the same team without Colson, and they will be even more different without Farrell, who also has a foot injury.  Head coach Mike Brey played only eight players in their most recent loss to Clemson, and Farrell played 32 of the 200 total minutes of those eight players.  How does Brey replace those minutes?  He certainly won’t be able to replace them with the same type of quality that Farrell provided.

Overall, Notre Dame has lost four games in a row.  However, they are still capable of winning.  They defeated NC State without Colson in the lineup, and they also knocked off Syracuse 51-49 in the Carrier Dome without either Colson or Farrell in the lineup.  They also lost at home by only one point to North Carolina without their two best players. Still, this team seems to struggle offensively without both players in the lineup.

Here’s a look at their starting lineup against the Tar Heels, which was their most recent game without both Colson and Farrell…

G DJ Harvey (6-6, 220, Fr.): 5.8 ppg, 2.9 rpg.  Harvey has been inserted into the starting lineup recently with Notre Dame’s injury problems.  He seems to play a lot when Farrell isn’t available, but on days when Farrell has been able to play, Harvey has gotten a lot of time on the court, including 37 minutes in that UNC loss.  However, Harvey is also out for the Virginia Tech game with an injury.

It’s hard to say what lineup Mike Brey will go with against Virginia Tech.  He doesn’t have many options with Colson and Farrell out.  The loss of DJ Harvey complicates matters even further.

Despite losing Colson on the inside, Notre Dame will still be one of the most formidable rebounding teams the Hokies will face this season.  Take a look at what the Irish have done over the last three games on the boards…

Keep in mind that’s without a player who is averaging over 10 rebounds per game.  Virginia Tech was able to outrebound North Carolina on Monday night, and they’ll have to bring that same intensity to the glass in South Bend.  The Irish are also struggling mightily on the offensive end, so the Hokies have a chance to play two good defensive games in a row.

If Virginia Tech pulls off the win at Notre Dame, it will improve their record to 15-6 overall and 4-4 in the ACC.  It would also be just their second win ever against the Irish, the first coming in the finals of the NIT on March 25, 1973.