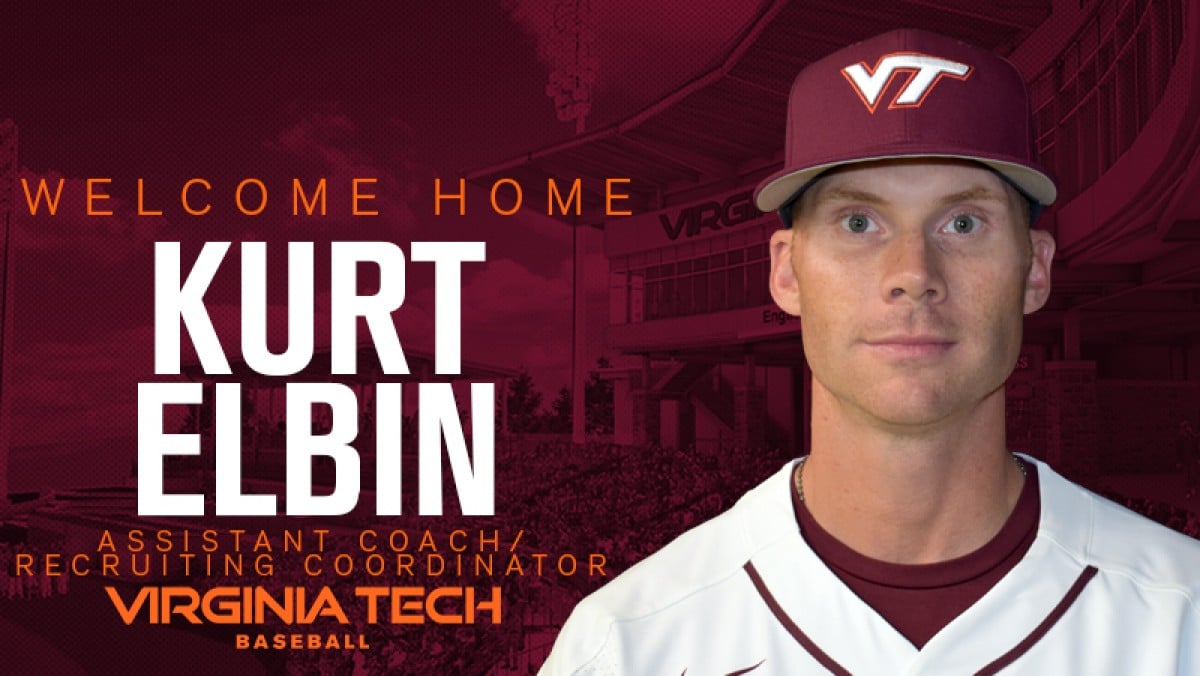 After John Szefc was hired, the Hokie Nation and the college baseball scene was anxious to see who he would bring along on the staff. Szefc found a gem in hitting coach and recruiting coordinator Kurt Elbin.

Elbin spent the past five seasons at Virginia Commonwealth University. The Rams have had bounds of success with Elbin as the hitting coach, finishing with 35 wins or more in the past four seasons. Three times in the past four seasons, VCU has finished in the top 100 in batting average and finished first in the Atlantic 10 Conference in 2017 under the guidance of Elbin. Despite these accomplishments at VCU, Elbin knew his time in Richmond ended once Szefc offered him the position at Virginia Tech.

“It wasn’t really tough to sell,” Elbin said. “Coach Szefc let me know that I would have a lot of control in the offense along with recruiting, and that was certainly attractive. Those were the two biggest things. Also, just his reputation. Being able to understand what his vision was for the program was what really got me here.”

In his five years at VCU, Elbin became familiar with the recruiting landscape in the state of Virginia. Now in his other role as recruiting coordinator, he can leverage that experience in the state to take Virginia Tech’s recruiting to the next level.

“When I was at VCU, there was certainly a number of schools who kids were gravitating towards and Virginia Tech was always one of them,” Elbin said. “Also, understanding that it’s all about relationships and contacts. Who you know and organizations that you trust in terms of the summer baseball, the whole travel deal. For me, it’s just attacking those relationships and staying involved on the phone and through emails with coaches. Trying to identify the best talent that you can. It’s not new. It’s more about getting coach Fecteau and coach Szefc, getting those guys introduced to the guys in the state that they need to know.”

Any time a coach or player is put in a new environment, there are adjustments that need to be made. In his short time in Blacksburg thus far, Elbin has already seen some of the growing pains that may lie ahead as the new regime looks to take the baseball program to prominence.

“I think the biggest challenge that we’re going to face is trying to match personnel with our style and what we want to do,” Elbin said. “The players here are really good and I thought the previous staff did a good job. However, it’s just trying to match what you want to do offensively, defensively, on the mound with who you have is certainly the task at hand. That being said, you also have to adjust. We have to adjust to what we have, and that to me is what is going to be the biggest hurdle moving forward. Other than that, we have resources. Just a great academic spot. I think people love the campus. There’s a lot of easy yesses, especially once the facility gets built.”

Any hitting coach is going to have their own philosophy to hitting, and Elbin pointed to a blend of several areas that he looks for in a hitter. However, there’s one universal trait that he has seen in the best hitters of the past few seasons.

Last year, Virginia Tech saw an offensive surge behind a number of talented hitters including Tom Stoffel, Sam Fragale, and Jack Owens, who all return this year. In fact, the Hammerin’ Hokies crushed 84 home runs in 2017 compared to 81 combined home runs from 2014-2016. 2017 was the year of the home run in Major League Baseball as well, breaking the record set in 2000 for most home runs in a season. It’s part of the recent trend that has seen a proliferation of home runs as well as strikeouts. Despite this recent trend, Elbin doesn’t want the Hokies to get too caught up in this tendency.

“The arms are too good in this league on Friday and Saturday and to be able to understand that you’re going to swing and miss, and if you don’t get that one swing that one game, you’re just going to throw up the L,” Elbin said. “I really can’t live with that. We’re going to embrace it. We want the guys to do it. If they have the ability to hit the ball out of the park, get big, swing hard and get aggressive. Also, we’re not naive to think there’s [not going to be] days when we’re going to need to hit the ball to the right side. We’re going to have to bunt, we’re going to have to do some smaller things to score. I think you can coach both of them. We have to be able to be complete. That has to be one of our trademarks.”

With a bevy of returners coming back to a lineup that scored 6.47 runs per game last year, Elbin has lots of talent to handle. At first, it could have been an intimidating task to come in as a new coach and try to get the approval of players who are returning, but instead Elbin has raved about the process of connecting with them.

“I don’t want to say I was nervous about it, but I was just excited to see how they would handle me,” Elbin said. “Those guys didn’t question anything, and I certainly understand that they’re going to need their space because if you’re successful in this league, let’s face it, you’re going to get that respect. I give them a little more leeway because they’ve proved that they can do it in this league. They’ve really done a really good job of buying into what we want to do. They seem like they’re really receptive to it.”

While there are plenty of upperclassmen on the roster, 16 newcomers are also a part of the program. There are a few names that are already ahead of the curve when it comes to what Elbin has seen as the hitting coach.

With opening day just over a month away, Elbin and the rest of the staff just want to keep things simple heading into the long haul. Rome wasn’t built in one day and neither, will the Virginia Tech baseball program. One thing that Elbin does expect through this entire process is effort day in and day out.

“I just want them to play hard. That’s it,” Elbin said. “You can talk about numbers and goals to lead the league in hitting. There’s certain things that I think we all as coaches would love to accomplish, but I think the culture is the biggest thing we need to get right. Culture of work, culture of playing hard and giving great effort. If the guys play hard, if the guys work hard, the rest will take care of itself because we’ll get the right players in here. We’ll get the right type of mentality going. It’s all about culture. If they play hard, I’ll be happy.”