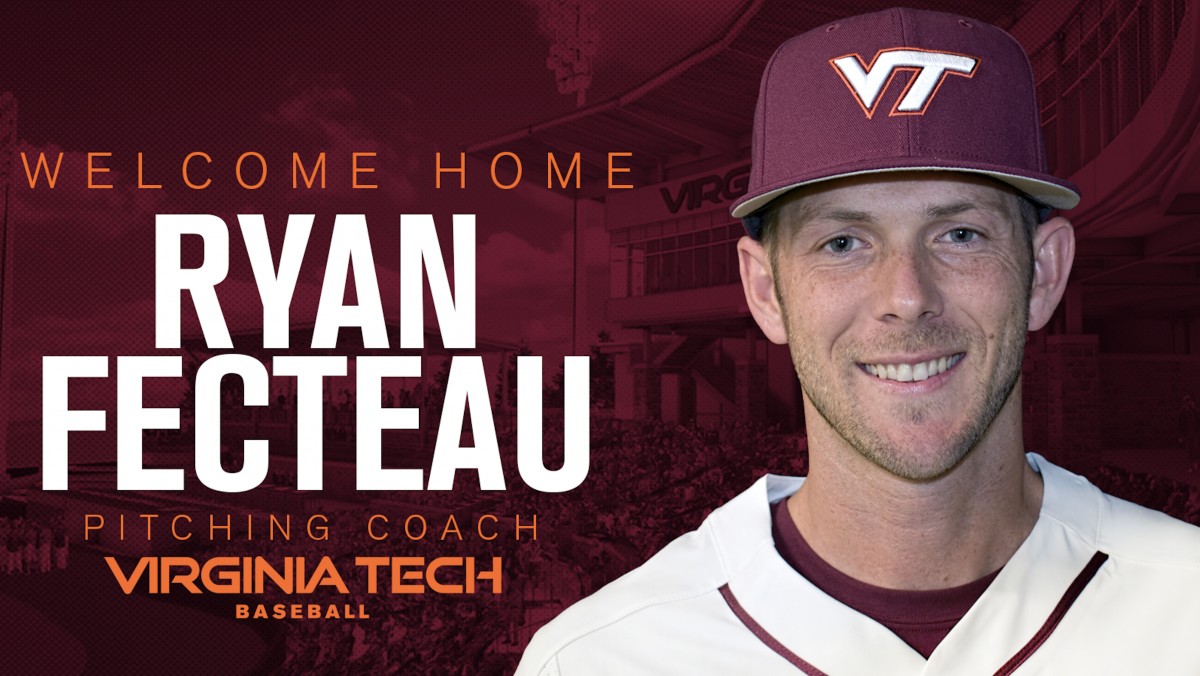 The best head coaches in any sport can only be as good as their assistant coaches. The assistant coaches largely do their work behind the scenes, but that work is just as critical come game day. Virginia Tech pitching coach Ryan Fecteau was brought along this fall with head coach John Szefc, and the move is already paying dividends for the Hokies’ pitching staff.

Fecteau has a history of overseeing talented pitching staffs. In his six years at Bryant University, the Bulldogs’ pitchers had the best ERA in the Northeast Conference in four seasons. The 2013 team stands out, as the staff carried a 2.73 ERA, good for 10th in the nation under Fecteau’s leadership. In his lone year at Maryland, the Terrapins ranked first in Big Ten Conference games with a 3.61 ERA. At Bryant and Maryland, 12 pitchers were selected in the MLB Draft in Fecteau’s time as the pitching coach. Now, Fecteau looks to achieve the same success as he takes over Virginia Tech’s pitching staff.

“It was a little different at Bryant because I spent a long time there,” Fecteau said. “I got to recruit a lot of guys and develop those guys. We weren’t necessarily getting the blue chip recruits. We were getting some guys who were overlooked by some big schools and still some really talented guys, but might not be quite the finished product. We had to emphasize development there a little bit. At Maryland, I was only there for a year, so I was put into a situation where the entire staff was from the previous pitching coach, Jimmy Belanger, who did a great job recruiting those guys. There’s a lot of talented kids there, so we had a ton of pieces to work with. It was just a matter of not messing it up. Now, here we’re just trying to get to know the staff. There’s a lot of pitchers on this staff, so I think we just have to figure out what they’re strengths are and how to find their niche within the pitching staff.”

Fecteau is tasked with managing a pitching staff that struggled at times last year. In 2017, the Hokies had a 5.82 ERA and opponents batted .299. Fecteau spent much of the fall meeting the players and beginning to learn where they’d best fit to perform at a high level on the mound.

“I think everything is just brand new, so we’re just trying to get to know the guys,” Fecteau said. “Try to learn what their strengths and weaknesses are. Trying to figure out how to put each guy in the best situation to succeed. The players are great, they’ve had great attitudes, so I don’t really think there’s been too many challenges to be honest. It’s just been getting used to everything. I don’t like cookie cutting guys, I like guys to have individuality. I think over the years it’s been more so trying to bring out the strengths in guys.”

Much of baseball over the recent years has been dominated by power arms at the plate and power bats at the dish. Fans have become fascinated by the pitchers hurling a fastball 100 miles per hour, or a hitter smacking a baseball 450 feet into the upper deck. Despite that trend, Fecteau isn’t changing the way he develops pitchers. He’s sticking to his tried and true method that has brought him loads of success in the past.

“I try not to get too caught up in what everybody is so excited about now and that’s power,” Fecteau said. “Everybody is into velocity, velocity, velocity. I’m still a believer that the velocity comes as you mature and strength train and all that stuff. I try to spend more time on the development of the pitching aspect of it. You’re developing a repertoire of pitches, learning the mental aspect of the game, the situational aspect of baseball. With the young pitchers and the injury rates that are so high, I think part of it is that everybody is trying to find ways to throw harder at such an earlier age. The harder you throw it at a younger age, the more at risk you are. I think there’s not a lot of patience right now with that stuff. That’s the one thing I try to be patient with is the velocity thing, and the kids that we’re recruiting have pretty good velocity anyway. We’re really trying to develop the pitching side of it.”

One thing that Fecteau will always have to monitor is how players are recovering from arm injuries. Virginia Tech features three players who will be returning from Tommy John surgery in Nic Enright, Connor Yoder, and Luke Scherzer. Interestingly enough, all three players are in different stages of the recovery process. Enright threw a lot in the summer and just did some bullpen work in the fall, Yoder got to full speed and threw a couple of innings in the fall, and Scherzer didn’t throw during the fall.

“I think Enright looked great when I saw him,” Fecteau said. “I think he’s got the makeup and the stuff to be a frontline, weekend type arm in the ACC. Yoder is super projectible kid. He just needs to get out there and pitch. He’s just been on the shelf for so long. I think he’s got a chance to be special. Luke is just one of those guys who has been around the block for awhile. He is just chomping at the bit to get back out there. Luke will be a nice addition once he’s ready to go, and he should be ready to go at the start of the season. Three guys who we didn’t get to see too much of during the fall, but all three are going to have significant impacts in the season this year and have some big roles.”

“They [Seymour and Okuda] both solidified their roles on the staff as being impact type arms as freshmen,” Fecteau said. “They’re going to pitch, it’s just what role they’re going to pitch in. I think they both have a chance to be starting pitchers. They’re a little different. Okuda is a little more of a command, control guy. Once he puts on some strength, I think the stuff’s going to make a jump. He’s got a chance to be a really nice arm. Seymour competes really well out there. He’s got really good stuff. I think the big things with those two where they separate themselves is you knew what you were going to get out of them whenever they took the mound. You were going to get a solid competitive outing to give your team a chance to win.”

Fecteau’s first fall in Blacksburg is complete. Now things will start to heat up, as the fans are anxious to see how the pitching staff fares in the spring.

“If we can keep getting better every week I think the wins will fall into place,” Fecteau said. “There’s a really strong group of guys on this team, especially upperclassmen who seem really hungry. We just have to put it together.”