CHARLOTTESVILLE, Va. — This could have been the year. With Virginia Tech reeling from injuries and a beleaguered offense, the Virginia Cavaliers had a chance to end the Hokies’ 13-game win streak in the in-state rivalry.

Alas, it was not meant to be. The Hokies’ defense turned in a stellar performance for 60 minutes, and the offense mustered just enough points in No. 25 Virginia Tech’s 10-0 win over Virginia inside Scott Stadium.

“I thought it was as good of a team win as I’ve been a part of, and I hope everybody is proud of these kids, because they have battled,” said head coach Justin Fuente. “To pour it out on the field a week ago, and come back less than a week and play as hard, as smart and as tough as they did, speaks a lot about their character.” 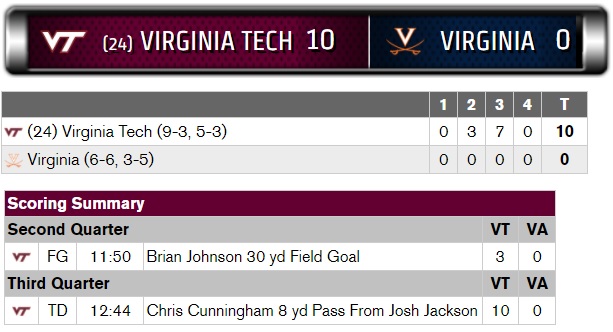 With several starters out due to injury, Virginia Tech’s defense played their best football of the season. The Hokies earned a shutout, and held the ‘Hoos to just 191 total yards on offense. Virginia finished the night with just five rushing yards, and didn’t fare much better through the air. Quarterback Kurt Benkert went 17-34 for 186 yards, and was sacked four times by Tech’s defense.

“Number one, really proud of our kids. For the whole group, the whole football team, because we were a little bit of a M.A.S.H. unit coming in here,” said defensive coordinator Bud Foster. “We knew we were going to have some players play some significant roles that hadn’t been in that situation before. I knew they were going to step up though. They were ready. They’ve been working towards that all year.” 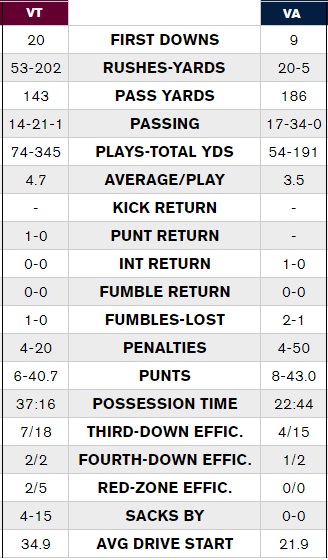 The Virginia offense had completed 13 plays of 20-plus yards in their last three games, but completed just three such plays on Friday night. However, Virginia failed to make it inside Virginia Tech’s red zone, and kicker AJ Mejia missed his only field goal attempt, from 41 yards out. Virginia’s inability to run the ball left them in several third down and long situations, and they finished the night just 4-15 on third down.

“We felt like, and Bud can speak to the specifics, but in our conversations, we needed to obviously control the line of scrimmage. We felt like we had an advantage there, or would have an opportunity to do that,” Fuente said. “But to completely make them one dimensional like that is pretty impressive.”

After a 3-0 stalemate in the first half, Virginia Tech’s defense created a play that changed the game. Rover Reggie Floyd came down into the box and popped Virginia’s Chris Sharp on the first drive of the third quarter, forcing a fumble. Gaines, making his first career start, jumped on the ball and gave the Hokies’ offense terrific field position and momentum to start the third quarter.

“I think it really just sparked the offense, gave us momentum,” said tight end Chris Cunningham. “The defense did an incredible job. (Gaines) did a great job recovering the fumble. The defense played lights out.”

Tech converted the turnover into points. Quarterback Josh Jackson, who finished the night 14-21 for 143 yards, a touchdown and an interception, threw a pass to freshman Hezekiah Grimsley for 25 yards, putting the Hokies in the red zone.

“They were one-high,” Jackson said. “We tried to throw a post on that play, but I saw (Grimsley) had a step on the guy, and he made himself look good.”

Three plays later, Jackson struck gold. Virginia Tech ran play-action from the Cavaliers’ 8-yard-line, and Jackson found Cunningham for the score. Brian Johnson, who filled in for an injured Joey Slye, hit the extra point to give the Hokies a 10-0 lead, which felt insurmountable.

As it would turn out, it was. But, not until Virginia gave the Hokies a scare. In the fourth quarter, facing a second and 21, Virginia’s Benkert found Andre Levrone for 51 yards, putting the ‘Hoos at the Hokies’ 40-yard-line. Benkert moved his team just a little closer, and thought he converted another first down with a pass to Doni Dowling. However, review ruled the ball skipped off the ground before the catch, putting the Hoos’ in a tough spot on third and 10.

After the incompletion on third down, Dowling’s frustrations got the best of him, as Dowling shoved Tech defensive end Trevon Hill. Dowling was called for an unsportsmanlike conduct, pushing the Cavaliers out of field goal range. Dowling’s penalty was one example of an incredibly chippy game that resulted in Virginia linebacker Andrew Brown’s ejection on the next drive, after he threw a punch at Deshawn McClease.

“I don’t believe in it, and I don’t tolerate, obviously, the accountability for it and all it does is hurt the team,” said Virginia head coach Bronco Mendenhall. “My job is to continue to evaluate the threshold of our program to where that kind of behavior is gone and all we see is tough, physical play within the whistles, and that’s all we see. Any of the other stuff that happens and any of the residue that’s left over from before, my job is to flush it all out. There’s still some that showed up today.”

From that point on, Virginia had zero chance to win the game. The Hokies got to running the ball again, something they did 53 times for 202 yards on Friday night. Deshawn McClease and Steven Peoples, who played in his first game since Oct. 28, both ran for 71 yards each.

“I was pleased. I thought it set up some other things,” Fuente said of the running game. “We’re still not good enough to line up and just force feed it down anybody’s throat, but I like the way those kids ran. It was nice to have Steven back. You know how we feel about him. When he’s healthy, he gets out there and gets carries, because he does run hard and tough. And Deshawn was a nice little mix-up in there, with some speed and quickness.”

Even with an ugly performance, the Commonwealth Cup is staying in Blacksburg. Virginia Tech’s win streak over Virginia now stands at 14 games, and given how beat up the Hokies were coming into the game, this might be Virginia’s best chance for a couple of years.

“I think the first thing that comes to my mind is that it’s an honor,” Fuente said of the streak. “It’s an honor to get a chance to build on something special and be a part of something bigger than yourself. Whether it’s the streak, or it’s Virginia Tech and this football program. The streak is — I’m not sure I can put it into context. I’ve only been here for a couple of the games. I just, I know it’s nice to get to add to it and continue it.” 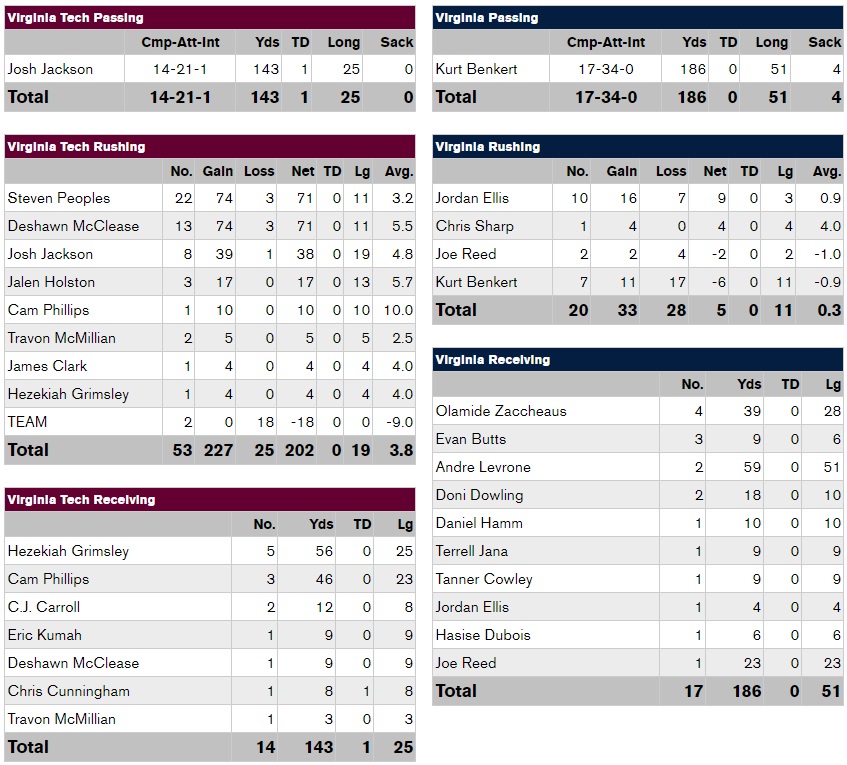