BLACKSBURG, Va. — For many of Virginia Tech’s seniors, their careers have been an emotional roller coaster. So it’s only fitting that their final game in Lane Stadium ended the same way.

The Hokies gave up a 75-yard completion that nearly gave Pittsburgh the lead late in the fourth quarter, and then rebounded to make a last-second goal-line stand to defeat the Panthers 20-14 on Senior Day.

“I just think the way it finished is indicative of who they are and what they’re about,” said head coach Justin Fuente. “I think there is a group of men in that locker room that refuse to let them down, and they found a way to get it done. Just awfully proud and happy for them.” 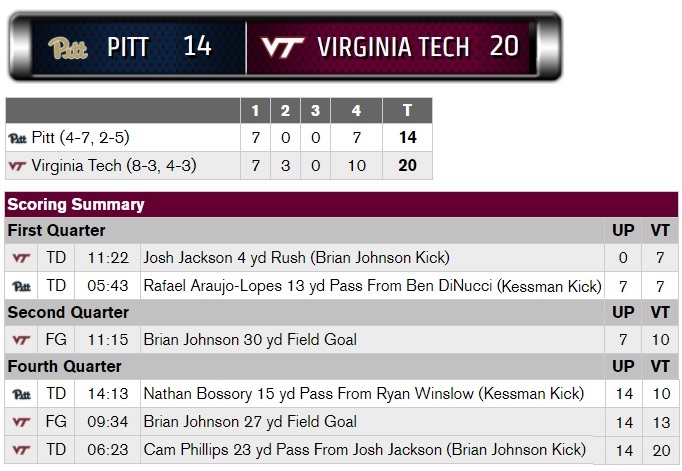 The sequence will go down in Virginia Tech folklore. After seizing a 20-14 lead midway through the fourth quarter, Virginia Tech forced a fourth down and four on Pittsburgh’s 25 yard line with a little over a minute to go. Backup quarterback Kenny Pickett connected with Jester Weah, who broke a tackle and scampered free down the sideline. Reggie Floyd tracked him down from behind with 1:02 remaining, giving the Hokies one last chance. 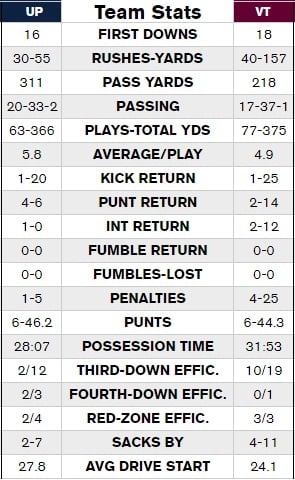 The Virginia Tech defense then proceeded to stop Pittsburgh on four straight plays from inside the 2-yard-line, culminating in a gang tackle for a 3-yard loss as time expired that spurred a team-wide celebration on the field.

“The play of the game was Reggie Floyd not giving up on that play,” said defensive coordinator Bud Foster. “We talk to our kids every day about finishing, and today was a big part of it. Every blade of grass is critical, and it was in that play right there. You talk about a big-time effort. I know when I look at the film, Tim Settle and Ricky Walker and Tremaine Edmunds and Andrew Motuapuaka, I know those guys are going to be playing on the other side of the line of scrimmage, but the play of the game was that play.”

After the stop, the entire Virginia Tech sideline ran onto the field, with several players sprinting in jubilation. Some shouted in happiness, while some showed uncontrollable emotion.

“I’m not sure everybody understands the emotion that those players are going through when they’re on top of the mountain, it was fourth down and the crowd is into it, and all of a sudden, the guy is running the length of the field and we’ve got to find a way to get him on the ground, which we did, and lived to play another day. Then you’ve got to regroup yourself to go play defense again,” Fuente said.

The fourth quarter overshadowed what was otherwise an uneventful game. Virginia Tech carried a 10-7 lead into the fourth quarter, and gave up the lead on a fake field goal. Pittsburgh’s Ryan Winslow took the fake and threw a 15-yard touchdown pass to Nathan Bossory, giving the Panthers a 14-10 lead with 14:13 to go.

Virginia Tech answered with a field goal on their next drive, but still needed a spark. They found it in a Greg Stroman interception, which gave the Hokies two things they desperately needed — field position and momentum.

“Yeah, we were struggling a little bit offensively, and yeah it jumpstarted, gave us a chance to put the ball in position to go score,” Foster said. “Anytime you can change the momentum — I thought Pitt had a little. They scored, I thought they had a little momentum going, and that was a big play in the game.”

“I think that helped the momentum for the game, especially with it being a big return and everything like that,” Josh Jackson said. “We just took some shots, and got in the end zone.”

Indeed they did. Starting from the Panthers’ 40-yard-line. Virginia Tech slowly marched deeper into Pittsburgh territory, and Jackson threw his first touchdown pass of the month to Cam Phillips, giving the Hokies a lead.

“It was really gratifying,” Phillips said of his touchdown. “I really thought I let the team down [at the end of the Georgia Tech game]. Josh said he blamed himself for the loss, but it was my fault for the Georgia Tech loss. But I just felt I owed it to the team, to myself, to make those plays when put in those situations.”

Virginia Tech, leading 19-14 after the touchdown, then attempted a two-point conversion to give themselves a seven-point lead, and converted. However, the play was called back due to an ineligible receiver downfield, and the Hokies kicked the extra point. Tech led Pittsburgh 20-14 with 6:17 left to go.

The Hokies’ defense held on their next possession, and then took the field one more time with 1:34 left to play. They forced a fourth and four, before giving up the completion to Weah.

With the ball inside Virginia Tech’s 2-yard-line, Pittsburgh had four plays to ruin the Hokies’ Senior Day. The Panthers ran right with star running back Darrin Hall, and gained nothing. Head coach Pat Narduzzi then used his final timeout, before calling another run to the right for no gain. Motuapuaka, one of the senior leaders for the Hokies, was in on both tackles.

“I just kept saying to the guys, ‘It’s now or never. Either we make this play, or they win the game,’” said Andrew Motuapuaka. “It was real emotional when we made that stop. The tears just started flowing. It was a hard-fought game, and it was a big goal-line stand.”

On third and one, Pittsburgh’s Pickett threw a fade at Stroman, another senior leader. Stroman broke the pass up, leading to a monumental fourth and one with just three seconds left. Pittsburgh ran wide to the left with Hall, and four or five Hokies swarmed, including seniors Motuapuaka and Deon Newsome, to make a 3-yard loss, ending the up-and-down ride. That cued the celebration.

“I think I ran to like the 10-yard-line, and I couldn’t run no more,” Motuapuaka said. “I fell on my knees. It was real emotional.”

The win ends a two-game losing streak for the Hokies, and puts them at 8-3 ahead of their in-state showdown vs. Virginia (6-5) next Friday. Now, after an inspiring win on Senior Day, the Hokies can turn their full focus towards the Cavaliers with more confidence than they’ve had the entire month of November.

“Of course that’s a rival game, so we’re going to be pumped for it regardless, whether it was a win or lose, but having a win and ending that two-game losing streak at home, it was really good for us,” Floyd said. 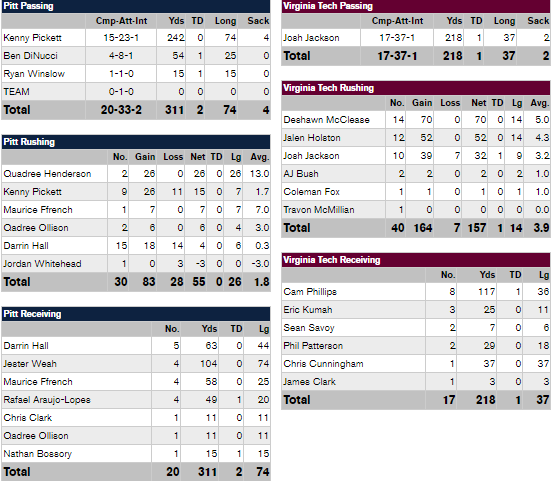