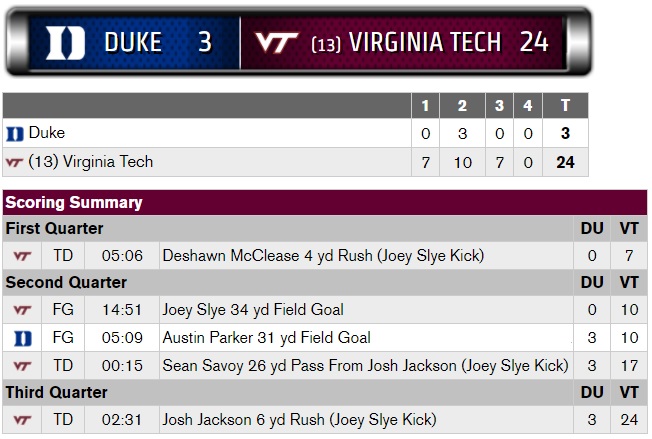 BLACKSBURG, Va. — Much like the weather conditions, Virginia Tech’s offense wasn’t pretty on Saturday vs. Duke. It was effective enough, however, and the No. 13 Hokies cruised to a 24-3 win over the Blue Devils.

“Obviously, it got progressively more challenging out there as the game went along,” said head coach Justin Fuente. “I thought our fans were more into it as the elements got worse, which is pretty cool, a pretty cool thing.”

The Virginia Tech defense stifled Duke all night long, and may or may not have been aided by the poor weather. The Hokies’ defense bottled up the Duke offense, allowing just 183 total yards. Duke quarterback Daniel Jones went 10-24 for 82 yards and an interception, while the Blue Devils went just 4-15 on third down conversion attempts. Mook Reynolds had a standout performance for Tech, finishing with 2.5 tackles for loss and a forced fumble in the second quarter. In all, six players recorded at least one tackle for loss and the Hokies finished with nine as a team.

The biggest thing hindering Duke’s offense was their inability to run the football. The Blue Devils averaged just 2.9 yards per carry, with Jones’ 65 yards leading the way.

“I don’t know if we did anything special,” said defensive coordinator Bud Foster. “We brought a new wrinkle in one of our pressures, and we hit that early. I think this goes back to our guys being sound in their fits. They really didn’t come out running the ball, they came out throwing it and really didn’t establish that, but then they couldn’t get that established.”

“Y’all know coach’s philosophy with Coach Foster — stop the run,” Reynolds said. “Take the run away, and make a team try to beat you in the air. That’s really when you have fun, when you can pin your ears back and play.”

“Well, it was huge,” Fuente said. “It was like two different games. In my opinion, in the first half, the conditions were not really an issue. It rained a little bit. But in the second half, that’s when it’s huge. You’re playing in a close football game and the weather conditions are like that, and one disaster can lead to a bunch of problems.”

Bradburn and the punt team’s ability to pin the Blue Devils deep inside their territory aided the Virginia Tech defense more than the weather.

“I thought the difference in the game was our kicking game,” Foster said. “Oscar did a tremendous job of pinning them back, where they had to have long drives. We had four or five times where the ball was inside the 10-yard-line. Particularly, in these kinds of conditions, it makes it really tough for an offense to drive the ball.”

The rain may not or may not have impacted Virginia Tech’s offense, but the Hokies were effective nonetheless. The Hokies avoided turning the ball over, and ran for 187 yards on 48 carries, averaging 3.9 yards per rush. Deshawn McClease, who led the way with 75 rushing yards and a score, credited the offensive line after the game.

“I feel like the O-line did a great job out there today,” McClease said. “They made our job easier.”

Josh Jackson had a less than stellar day. He finished the game 13-27 for 200 yards and a touchdown, but also added a rushing touchdown to the scoreboard. Even though it was an uneasy performance, Jackson and the Hokies took care of the ball and didn’t even have a bad snap in the driving rain.

“I thought it was pretty special,” Fuente said. “Josh deserves a ton — it starts with our center and Josh, the first part of taking care of the football. Gallo did a great job handling the snaps, I thought Josh did a great job of taking care of the football, and the guys running with it. I know we’ve made this a big point of emphasis, but it’s just true that for us, with where we’re at, right now, this team, to have a chance to have success, we have to do those things. There’s no choice.”

Virginia Tech got their licks in on offense before the rain kicked in. After failing on a fourth down conversion attempt on their first possession, the Hokies embarked on a nine-play, 71-yard drive that ended in a McClease score. Tech then took advantage of a fumble by Duke’s Jones to tack on a field goal at the beginning of the second quarter for a 10-0 advantage.

Duke’s offense struggled for the entirety of the first half, but put together one good drive in the second quarter. Duke’s Jones converted two third downs, including a 41-yard pass to Johnathan Lloyd, and drove the Blue Devils down into field goal range. Austin Parker nailed a 31-yard field goal to cut Virginia Tech’s lead to just one possession.

While the Hokies’ offense slogged around for most of the second quarter, Tech caught a break before halftime. A personal foul on Duke’s Shaun Wilson backed Duke up into their endzone on fourth down. After the punt, Jackson connected on a 26-yard pass to Sean Savoy to give Virginia Tech a 17-3 lead after two quarters.

“Yeah it was funny, because I saw the look. They were just bringing the house on us, and I yelled to (Savoy), ‘win,’” Jackson said. “That’s all I really said to him. I threw it up, and he made a great catch.”

“First off, I saw that they rolled down into man, so I yelled at Josh,” Savoy said. “He said he yelled at me, I yelled at him. But I just told him I was going to go out there and win, and he was like, ‘win,’ like he said, and I just went out there and played.”

That sequence, which gave the Hokies a two-score lead heading into the halftime, flipped the momentum a bit. Duke was hanging around, but with the rain getting worse as the night dragged on, 14 points was almost insurmountable.

“I thought that was a big point in the game,” Fuente said. “It’s easy to say in retrospect. I’m not a meteorologist, but I felt like the weather was going to get bad. To score a touchdown there and go into half with the rain picking up and that sort of stuff, I thought it was pretty big.”

Virginia Tech’s offense continued to slosh around in the rainstorm in the third quarter, but added on to the lead late in the period. The Hokies engineered an eight-play, 43-yard drive that ended in a Jackson touchdown run from six yards out. The Hokies took a 24-3 lead, effectively ending the game before the fourth quarter began.

Virginia Tech’s win puts them in great position heading into their two-game road trip. The Hokies will travel to Florida next week for a date with No. 8 Miami, who’s undefeated. After that, they get always-feisty Georgia Tech in Atlanta. But for now, Virginia Tech is 7-1, and 3-1 in the ACC.

“I think we’re ready to go,” Jackson said. “We’re going to enjoy this, and the big Tuesday practice will get us ready, and we’ll be ready to go against them.” 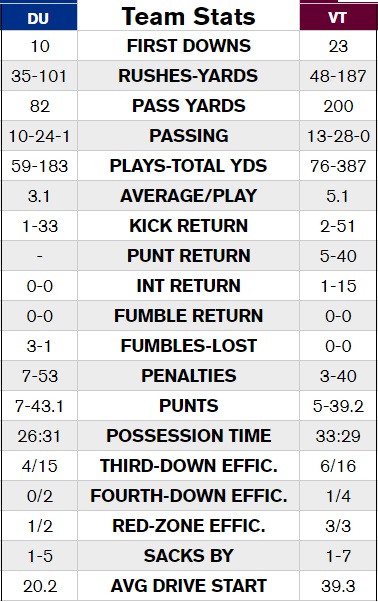 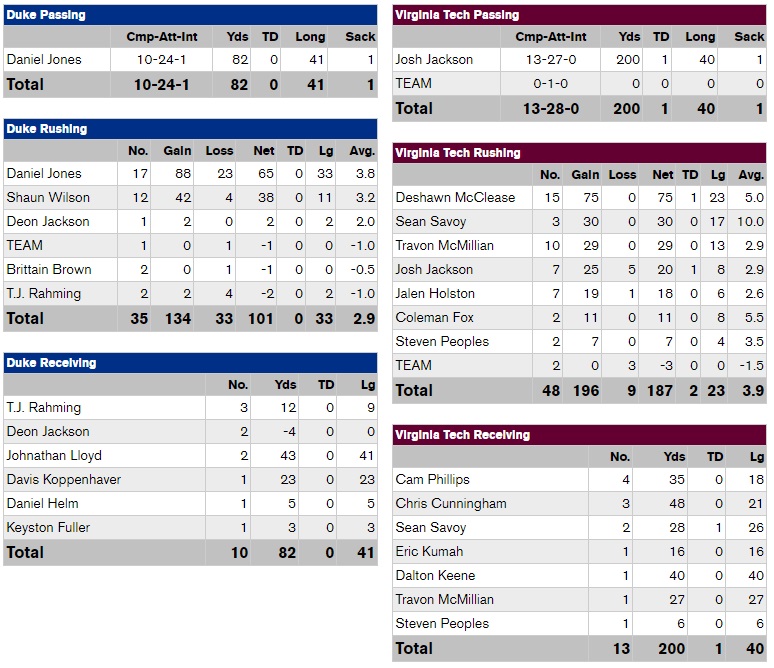