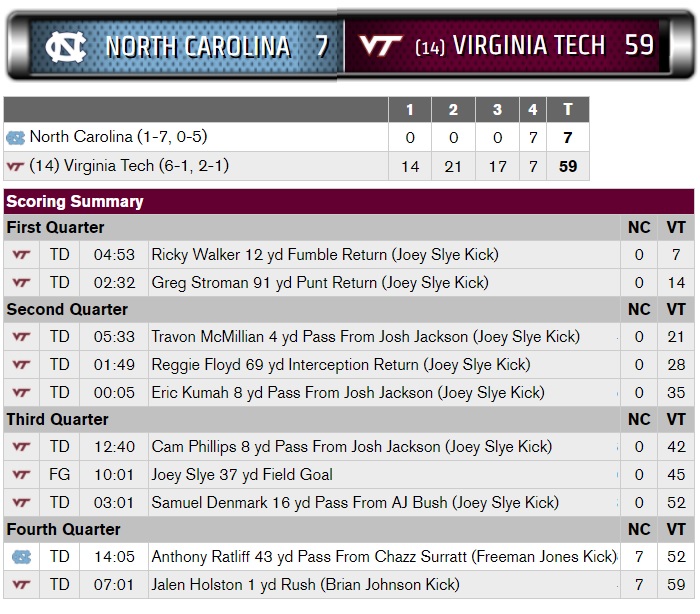 BLACKSBURG, Va. — Virginia Tech’s win over North Carolina in 2016 was viewed as tainted by some, due to the hurricane weather conditions. On Saturday, No. 14 Virginia Tech left little doubt on who the better team was, thanks to a 59-7 drubbing of North Carolina.

“We found a way to get this done and get it behind us, and we’re ready to move forward,” said Virginia Tech head coach Justin Fuente. “I was proud of our guys. I know North Carolina has a lot of things going on over there, and I feel for Coach (Larry) Fedora and the things that they’re going through. I’m just really proud of our effort in all three phases of the game.”

“It was nice. We made big plays on defense, we scored two touchdowns, we returned a punt for a touchdown,” Fuente said. “At times we played well on offense and at times, it was a struggle. I think that’s going to be us, quite honestly. We have a veteran defense, some young guys out there offensively, and we’ll take some of the good with the bad.”

The Hokies’ offense didn’t ace their test on Saturday, but they definitely passed. Josh Jackson finished the day 10-20 for 132 yards and three touchdowns. Coleman Fox led the Hokies in rushing with 58 yards, while Travon McMillian totaled 45 rushing yards and a receiving touchdown. Tech’s offense was slow in the first half, but picked things up in the second.

“They didn’t do much, it was mainly man,” Jackson said. “It was man coverage, we just didn’t execute well. We had a couple drops, I had a couple bad balls, which happens. Once we got that out of our system, we started to execute pretty well.”

Tech’s defense took North Carolina to school. The Tar Heels finished with only 172 yards of total offense and didn’t score until the fourth quarter. North Carolina turned the ball over three times and was just 3-17 on third down conversion attempts. The Hokies also registered six sacks and 13 total tackles for loss, making it a long day for Carolina quarterbacks Chazz Surratt and Brandon Harris. Tim Settle led the way up front, finishing with a sack and 3.5 tackles for loss.

“I was really proud of our kids and how hard they fought from that opening kickoff until the final whistle,” said defensive coordinator Bud Foster. “That’s all you can ask, but we challenged our guys. Charley (Wiles) and myself, we challenge those guys to, we needed to up our game and put more pressure on the quarterback, just with our front four, and not have to do it by bringing a fifth or sixth guy.”

“I’m not sure why it worked so well, but I know Coach Foster challenged us, and challenged the D-line,” said linebacker Andrew Motuapuaka, who had 1.5 tackles for loss and an interception. “Just to have a great day and get a certain amount of sacks. They definitely showed up and rose to the challenge.”

While the Virginia Tech offense sputtered in the early going, Tech’s special teams and defense issued quite the punishment in the first half. Tech brought the Tar Heels to a halt offensively, holding North Carolina to just 31 yards of offense in the first quarter and 67 yards in the second. Add on Walker’s fumble return and Stroman’s punt return, and the Hokies held a comfortable 14-0 lead after the first quarter.

“That’s always nice when the defense and special teams can help out and score points,” Jackson said. “I’d say it was very relieving. It’s also just awesome to be a part of, so getting that head start really helped us out.”

The fumble recovery was actually Walker’s first career touchdown. Not just in college, but in his entire life.

“I was lucky enough to get the ‘Sunday Hop’ right in my hands, and I just knew they were going to blow it incomplete, but I just ran to the endzone and the next thing you know, my teammates are celebrating with me,” Walker said.

It was almost like North Carolina didn’t show up for the end of the half. Motuapuaka batted a pass at the line of scrimmage, and it was returned 69 yards by Reggie Floyd for a score with under two minutes to play. Tech got the ball back again before halftime, and added on an 8-yard touchdown reception by Eric Kumah. The Hokies held a whopping 35-0 lead on the Tar Heels heading into the break.

The second half was much of the same. While the North Carolina offense continued to look fraudulent, Virginia Tech poured on another 17 points in the third quarter. Jackson tossed a touchdown pass to Cam Phillips to kick off the second half, while AJ Bush helped Samuel Denmark get his first career touchdown reception with a 16-yard pass. North Carolina scored early in the fourth quarter, but allowed a 1-yard touchdown run from Jalen Holston to widen the gap once again.

Virginia Tech is now 6-1 on the season, and 2-1 in the ACC. The Hokies host Duke next weekend on Oct. 28, before a critical two-game road trip vs. Miami and Georgia Tech. If Tech takes care of business vs. the Blue Devils next weekend, that road trip will be the determining factor in Tech’s season. But for now, the Hokies are happy with the win.

“It feels a little gratifying,” said Phillips, who also set the school record for receptions with 212, passing Isaiah Ford with 210. “As you’ve heard, the game last year with the hurricane, the weather today was what, 65-70 degrees? So, just to go out there and win like we did, play a complete game — offense, defense and special teams — it was just really fun to see and just fun to be a part of it.” 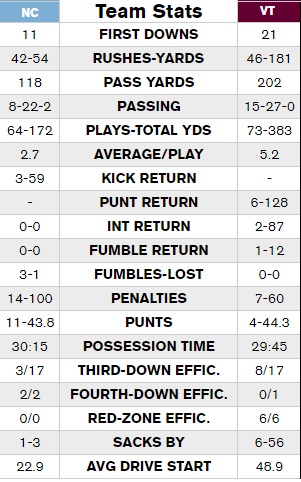 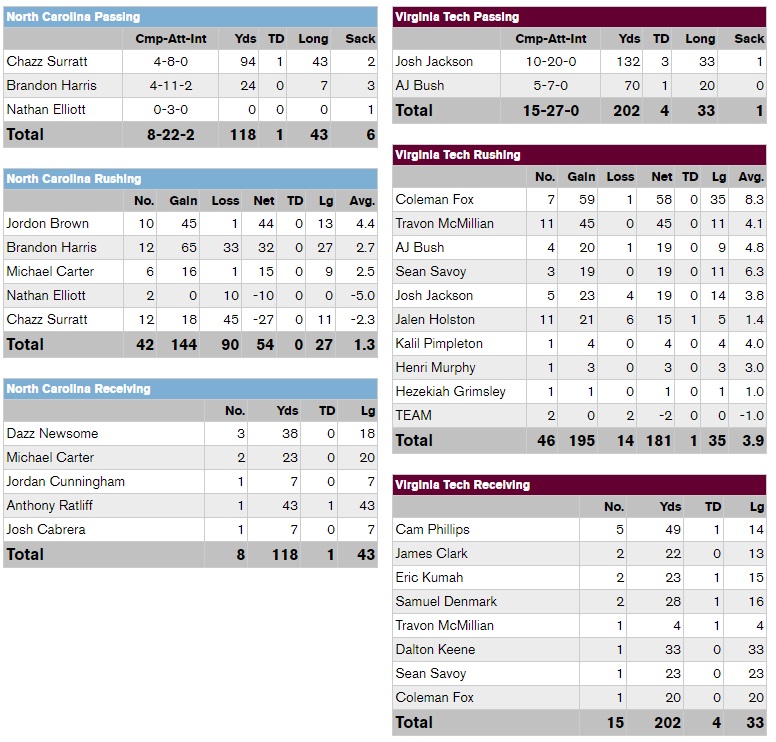