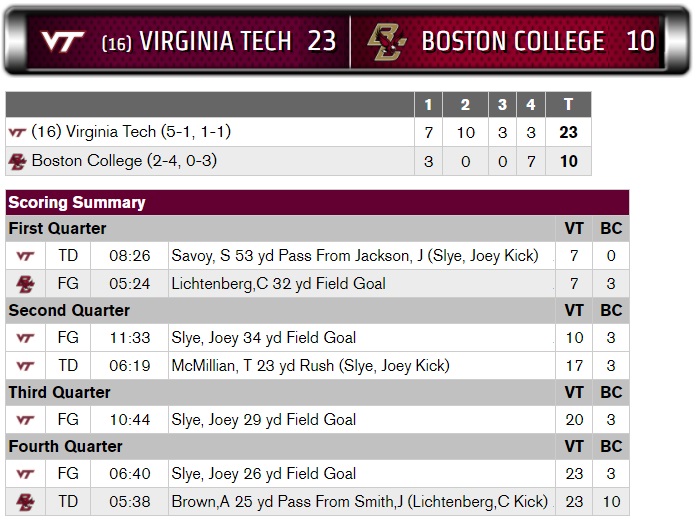 No. 16 Virginia Tech handled business against Boston College, winning 23-10 in an imperfect domination over the Eagles. With the win, Tech moves to 5-1 (1-1 ACC) on the season, while Boston College falls to 2-4 (0-3).

The Hokies’ defense was on cruise control for most of the game, shutting down the Boston College offense. The Eagles finished the night with 344 yards of offense, but much of that came late in the game, and the Eagles struggled on third down, going 2-15. Eagles quarterback Anthony Brown was 13-30 for 166 yards through the air, while adding 51 yards on the ground. Brown caught a touchdown pass as well from wide receiver Jeff Smith on a trick play.

Virginia Tech’s offense didn’t look great for much of the night, but did have some bright spots. Josh Jackson finished the night 22-33 for 322 yards, a touchdown and an interception. Tech racked up just 109 rushing yards on 48 carries, averaging 2.3 yards per rush. The Hokies held themselves back by turning it over once, and by committing nine penalties for 67 yards and allowing five sacks.

The biggest bright spot for the Virginia Tech offense was the emergence of younger receivers. Senior Cam Phillips left the game with a leg injury early in the first quarter (X-rays were negative), forcing other players to step up. Sean Savoy starred in Phillips’ absence, catching nine passes for 139 yards, both career highs, and a touchdown.

While the Hokies had just 109 yards on the ground, Travon McMillian had a season-high 88 yards on 17 carries (5.2 ypc) and scored a rushing touchdown.

Virginia Tech held a comfortable 17-3 lead heading into halftime, despite an inauspicious start. On the Hokies’ first offensive possession, Jackson threw an interception that was batted at the line of scrimmage. Boston College took over at the Virginia Tech 25-yard-line, but missed a 40-yard field goal attempt.

The Hokies capitalized. Virginia Tech would go on to score on three of their next four possessions, two of which were touchdowns. Savoy broke loose for a 53-yard touchdown to kick off the scoring, while Travon McMillian added a 23-yard touchdown run in the second quarter.

Boston College’s inability to finish drives hindered the Eagles in the first half. Boston College missed the early field goal attempt off the turnover, settled for a field goal on their next drive and later failed on a fourth down attempt at the Virginia Tech 23-yard-line.

The second half was much of the same for Boston College. While the defense slowed the Hokies’ offense to a standstill, the Eagles offense only scored on a trick play in the second half. Even though Virginia Tech’s offense could only muster six points in the second half, Tech’s defense made their double-digit lead for most of the game feel insurmountable.

The victory gives Virginia Tech their first ACC win of the season. The Hokies will have a bye week next week, allowing Tech to heal a bit and get players back. Phillips’s situation is unknown, and CJ Carroll and Steven Peoples both did not play vs. Boston College. It was Peoples’ second-straight missed game. Tech’s next game isn’t until Oct. 21, when the Hokies host North Carolina inside Lane Stadium. But for now, the Hokies are 5-1 on the season and 1-1 in the ACC heading into their bye. 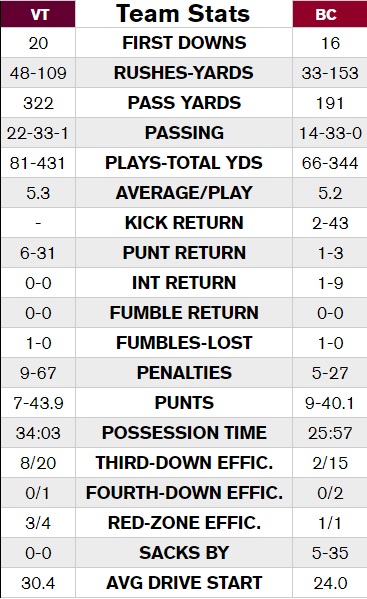 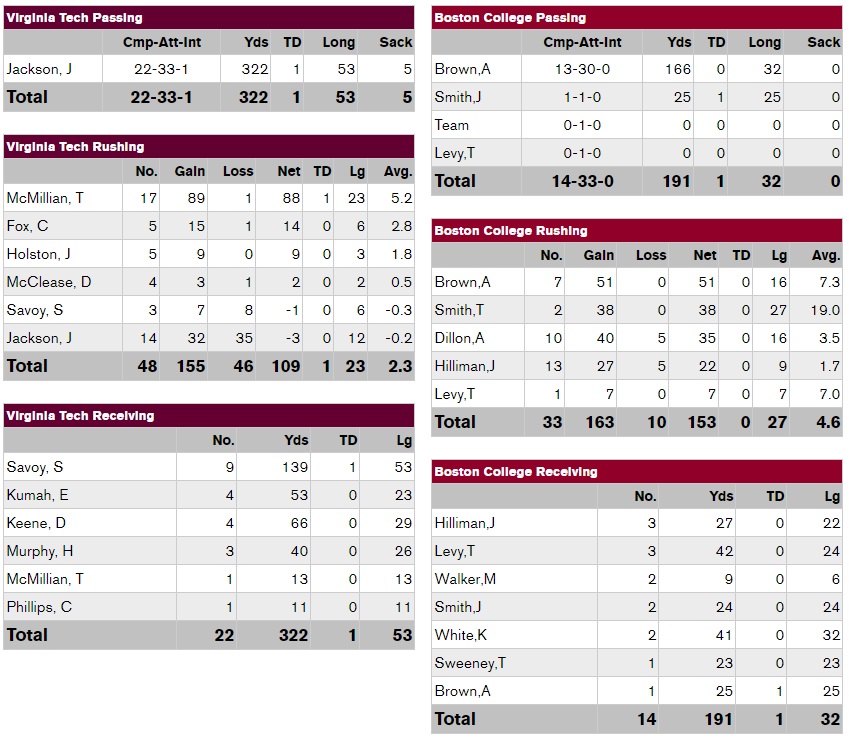