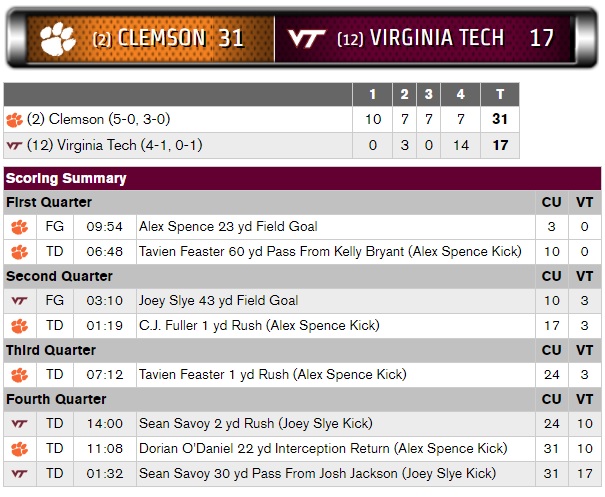 BLACKSBURG, Va. — In a matchup of ACC heavyweights, No. 2 Clemson flexed their championship muscles in a 31-17 win over No. 12 Virginia Tech inside Lane Stadium.

“First of all, I just want to commend the Hokie nation. I’m sorry. I wish we would have played better,” said Virginia Tech head coach Justin Fuente. “We played a really good opponent today that highlights mistakes really quickly. But, I thought the show that Virginia Tech put on for the nation to see was absolutely fantastic.”

The show Virginia Tech’s football team put on was not fantastic. Virginia Tech’s offense never found a rhythm on Saturday night, and made too many mistakes vs. a suffocating Clemson defense. The Hokies committed three turnovers, resulting in 14 points for Clemson. Josh Jackson finished the night 29-44 for 251 yards, with a touchdown and two interceptions. Travon McMillian lost a fumble in the third quarter, and the Hokies averaged just 3.2 yards per carry. The Hokies’ offense mustered just 342 total yards and were just 4-15 on third down.

After the game, Fuente said that Clemson’s defense played dramatically different than they have in the past.

“They played us differently than they’ve played before,” Fuente said. “They were usually an aggressive, attacking defense. They did not do that today. They played more 50-defense (five defensive linemen, two linebackers), more four-techniques than they had ever shown, dropping more guys. But we knew that we would still have to get the ball out quick, and run some screens, some misdirection, that sort of stuff. We knew that sledding was going to be difficult, no matter what they lined up.”

Cam Phillips, who made seven receptions for 74 yards, said that Clemson kept Tech guessing with their defensive schemes.

“I give credit to those guys,” Phillips said. “They did a great job mixing up looks, throwing a lot of different stuff at us… Against those guys, you’ve got to get a drive started and we couldn’t do that, which resulted in our defense on the field a little bit longer.”

The Hokies clearly designed their offensive gameplan to slow down Clemson’s pass rush. Virginia Tech ran a bevy of screens to running backs and wide receivers, quick passing plays and runs, in hopes to avoid taking sacks. Even though Clemson only had three sacks, Virginia Tech couldn’t move the ball downfield consistently vs. the Tigers.

“We did not want (Jackson) back there holding the ball, and I think that’s pretty much everybody’s plan when they play them,” Fuente said.

Virginia Tech’s defense only allowed 24 points, but struggled to stop Clemson quarterback Kelly Bryant. Bryant made plays as a passer and runner, finishing with 280 all-purpose yards and one passing touchdown. Running back Tavien Feaster scored two touchdowns, one on the ground and one through the air.

Feaster’s first touchdown came on a busted coverage and his second came after McMillian’s third quarter fumble. Defensive coordinator Bud Foster said that those two offensive series for Clemson were the difference in the game.

“We didn’t execute a couple scheme things, technique things on that drive that were disappointing,” Foster said of the drive after the turnover. “I thought that drive and obviously the big play, which was a busted coverage, those were two critical series in the game.”

The Hokies’ defense had hoped to contain Bryant in the pocket, but struggled to do so, especially in the first half. Bryant finished the night with 94 rushing yards, 65 of which came before halftime.

“He’s just a bigger guy,” said Tim Settle, who made six tackles and one sack. “I think we really wanted to whack-tackle him, instead of just tackling him, because he’s a quarterback. He’s real athletic.”

“I think he was pretty good in space, making guys miss,” said Andrew Motuapuaka. “He was breaking out of tackles, but overall he’s a good player with the ball in his hands.”

The first half was a struggle for Virginia Tech, on both sides of the ball. The Hokies’ offense didn’t earn a first down until their fourth drive of the game, and racked up just 149 total yards of offense in the first half. Virginia Tech had a chance to score right before halftime, but Joey Slye missed a 45-yard attempt.

Defensively, Virginia Tech got beat by a couple big plays. Clemson’s Feaster was left open in the flat on a busted coverage, and the sophomore sprinted for a 60-yard touchdown. Clemson added another touchdown late in the first half, after Bryant engineered a 6-play, 75-yard drive that ended on a CJ Fuller touchdown. The Tigers took a commanding 17-3 lead into half time.

Virginia Tech’s offensive struggles continued in the third quarter. The first drive ended in a Travon McMillian fumble, the second ended on failed fourth down attempt and the third failed on a fake field goal. Tech would come away with zero points in the third quarter, and trailed 24-3 heading into the fourth.

The Hokies generated a little momentum early in the fourth quarter, only to give it right back. After a 43-yard punt return from Greg Stroman to the Clemson two yard line, Virginia Tech scored their first touchdown on the night. Sean Savoy took a jet sweep to the left, making it 24-10 with 14:00 left to play.

Tech then forced a punt. On the ensuing drive, Jackson threw a screen to Henri Murphy, who bobbled it and lost sight of it. The ball fell into the hands of Dorian O’ Daniel, who returned the interception 22 yards for the score, effectively ending any hope of a Virginia Tech comeback.

“I did like the way our guys battled,” Fuente said. “I thought we were competitive, I thought our guys were competitive. It wasn’t always good, it wasn’t always pretty, but that was a group of men that were wearing maroon and orange out there competing their tails off. And we weren’t good enough. Our challenge is next week, the game will be a conference game, and we’ve got to get ready to go.”

“I thought our kids fought to the very end,” Foster said. “We gave up a couple of cheap scores on our end, and the pick-six, that ends up being the difference in the football game.”

Now, Virginia Tech has to pick up the pieces and move on. The Hokies are now 4-1 on the season, and will try to earn their first ACC win at Boston College next week. After a loss like this, the Hokies know there is plenty of room for growth.

“I hope we can build from it,” Foster said. “These guys are a bunch of great athletes, all over the place. There’s some things we can obviously learn from, and we will.” 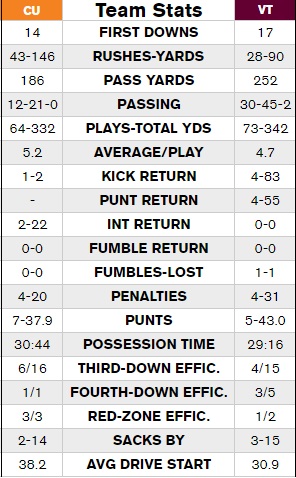 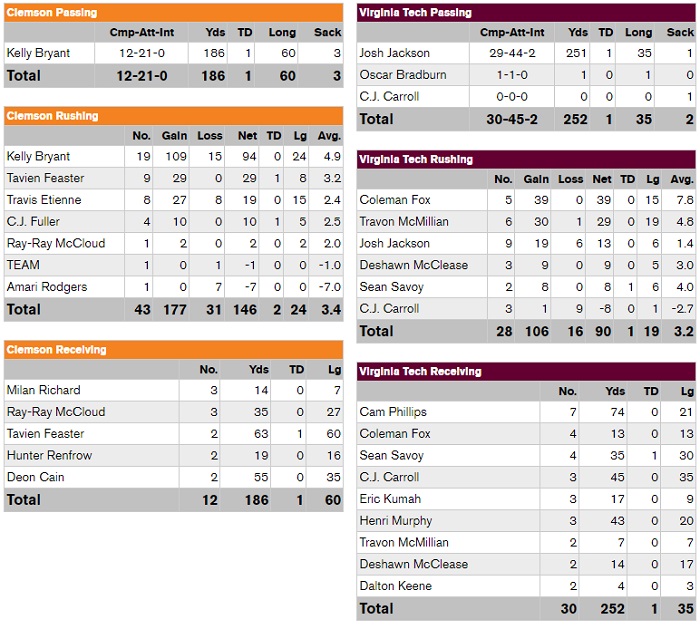