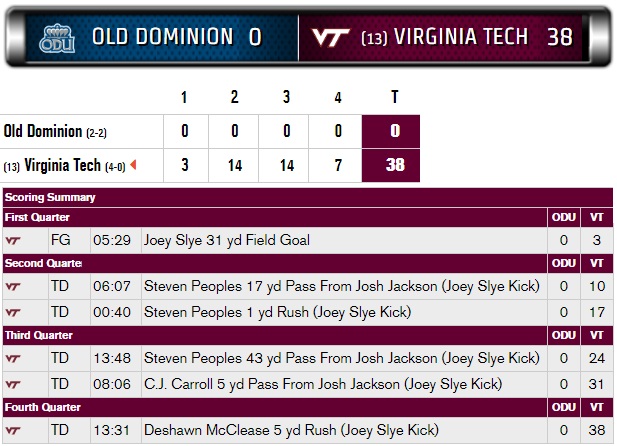 BLACKSBURG, Va. — With No. 2 Clemson just a week away, No. 13 Virginia Tech took care of business on Saturday by easily dispatching Old Dominion 38-0.

“It’s indicative of what we’ve been talking about for, now entering our second year, about taking things one step at a time, and our guys did not look ahead,” said head coach Justin Fuente. “I’m happy that we found a way to win the game.”

In a period starting in the second quarter, Virginia Tech scored touchdowns on five of their six possessions.

“I think we sort of calmed down a little bit and just started to execute,” Phillips said. “It’s always been like that. Not to say that that’s a good thing. We’d like to start faster and put points on the board earlier, but that just shows when everyone does our job and we lock in and focus in, how effective and efficient we can be on offense.”

Peoples was particularly impressive. The junior out of Galax, Va. came into the game with three career touchdowns, and doubled that total by the end of the game. He contributed both as a runner and receiver, catching a 43-yard touchdown pass in the third quarter that was intended for Cam Phillips.

“It felt pretty good to get in there more than once,” Peoples said. “I think you said it was my first time doing it, so it was pretty special. Hopefully I can do that again.”

On the play, Peoples ran a wheel route out of the backfield, while Phillips ran a vertical route. Jackson held onto the ball too long, and it ended up being a jump ball situation. The ball deflected right to Peoples for the score.

“That’s an actual route that we run, we were just a little closer than we usually are,” Peoples said. “I saw Cam going for the ball, like I was just going to let him catch the ball, because it’s Cam. As soon as I saw it bounce off of his hands, it landed right in my hands.”

As Jackson got to the sideline, Fuente let him know how he felt about the decision.

“It’s not for public consumption,” Fuente said with a smirk. “I was not happy. We got lucky on that, and I made sure he knew about it, but he rebounds, he’s tough, he’s smart, he understands things and he’s still young. He thought he had a chance one-on-one down there. At one time, he probably did, probably three seconds before he threw it.”

“That was the first touchdown that I’ve ever felt bad after throwing, like after a coach talked to me,” Jackson said.

The defense was consistently good all game long. Old Dominion’s true-freshman quarterback Steven Williams made a few plays, but was ultimately bottled up by Virginia Tech. Williams finished the game completing just 8-26 of his passes for 85 yards and an interception. In all, Old Dominion recorded just 149 total yards and crossed the midfield stripe just once.

“We challenged them to come out and be fast starters this week,” said defensive coordinator Bud Foster. “I thought they were going to run the quarterback a little bit more than they did. They came out and threw a lot of quick game. I thought we kind of got a feel for what they were doing on that part of it, and I thought our coverage was nice and tight. I wanted to win the line of scrimmage so they couldn’t establish a run game, so I thought we accomplished what we set out to do.”

Williams made his first career start on Saturday after making a relief appearance vs. North Carolina last weekend. Williams struggled as the game progressed, completing just one pass in eight second half attempts. The Hokies only had one sack, but pressured Williams regularly.

“Well, we got pressure on him, from a variety of different angles, and it forced him to get rid of the ball quickly,” Fuente said. “I think he has a bright future, for what it’s worth. I told Bobby (Wilder) that, and I grabbed Steven after the game and said, ‘Keep working hard, because you’ve got some good days ahead of you,’ but I think the fact that we were able to get some pressure on him really helped us in the backend.”

“Going in, we knew that was one of the reasons why they started him, because he has that ability,” said Ricky Walker. “Just going through the game today, it was getting a little aggravating on the defensive line, the sideline, just saying, ‘Man, he’s not taking no sacks. He’s running around and avoiding it.’ (Williams) did a good job. He has a bright future.”

In a similar fashion to Virginia Tech’s game vs. Delaware just two weeks ago, the Hokies’ offense got off to a sluggish start. Virginia Tech moved the ball down to Old Dominion’s 10-yard-line on their first possession, but Joey Slye missed the 27-yard field goal attempt. The Hokies would kick a field goal on their next drive, taking a 3-0 lead with 5:29 left in the first quarter.

Tech’s next three possessions resulted in two punts and an interception, which was Jackson’s first turnover of the season.

The Hokies rebounded quickly. After Divine Deablo’s interception on the next drive, Tech’s Steven Peoples scored on a beautifully designed screen pass from 17 yards out, giving the Hokies a 10-0 lead. Peoples scored again before the half on a 1-yard rush, capping off an 11-play, 79-yard drive. Virginia Tech led the Monarchs 17-0 heading into the break.

“I don’t know, we kind of just locked in and like you said, we just started to execute better,” Jackson said. “The plays were there, we just needed to make them. We just really picked it up after those first couple drives.”

Virginia Tech began pulling away in the third quarter with two consecutive touchdown drives. That included an 11-play, 59-yard drive, ending in a CJ Carroll touchdown reception. Tech’s offense continued to add to the scoreboard, as Deshawn McClease ran it into the endzone from five yards out early in the final period.

It would have been understandable for Virginia Tech to overlook Old Dominion. The Monarchs’ talent level isn’t anywhere close to the Hokies, and Tech’s game vs. the defending national champion Clemson Tigers is just days away. Still, Tech made it a point all week long to keep the focus on Old Dominion.

Now, the Hokies can focus all they want on Clemson.

“We’ll be ready to play them when they come in,” Phillips said. “We’re going to enjoy this win tonight, and then Coach (Fuente) will talk to us tomorrow about next week. We’ll be ready.”

“Well, we played a lot of games like this over the years here, and it’s going to be exciting to get back to have that kind of platform here in Blacksburg, where there’s a lot on the line,” Foster said. “Obviously, it’s just the first ACC game, but you’re talking about a premiere team coming in our place again. We’ve had some of those squads come in our place, and it should be a great atmosphere. We should have no reason for our kids to have any problem having a great week of practice, and looking forward to this game.”

No. 13 Virginia Tech is now 4-0 this season. The Hokies will host the Clemson Tigers on Saturday, Sept. 30 at 8 p.m. The game will be televised on ABC.