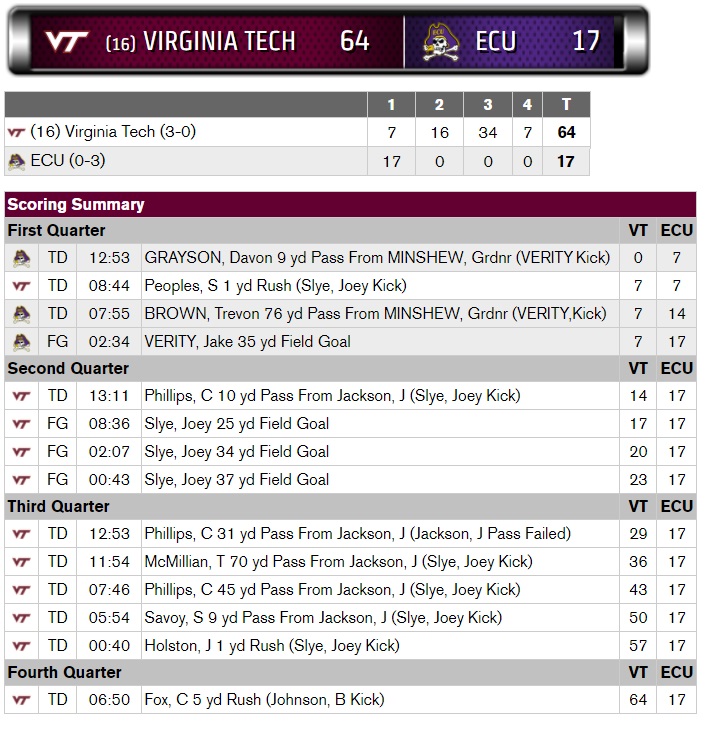 Maybe in another era of Virginia Tech football, the Hokies would have been fazed by their defense’s poor start. On the road at East Carolina, down 17-7 after the first quarter, the Hokies looked flustered and overwhelmed.

However, things didn’t stay that way for long. Virginia Tech’s offense and defense asserted their dominance for the remaining three quarters and scored 57 straight points, leading to a 64-17 blowout win over reeling East Carolina.

“It was nice to see our guys respond, and not panic, and just keep playing the game,” said head coach Justin Fuente.

The Hokies certainly did not panic. Once the first quarter ended, Virginia Tech owned East Carolina. The Hokies’ 57 unanswered points came thanks to flashy offense and efficient defense. Josh Jackson and Cam Phillips led the way, as Jackson completed 24-31 for 372 yards, five touchdowns and zero interceptions. Phillips finished a historic day with 14 receptions for 189 yards and three touchdowns. Phillips’ 14 receptions is a single-game record for the Hokies.

Many of Jackson’s passing yards came from big plays, like 31-yard and 45-yard passes to Phillips, and a 70-yard pass to Travon McMillian, all of which resulted in touchdowns.

“I’d have to look at the film. I just thought our overall execution level, speaking specifically about Josh, was higher than what maybe it was last week,” Fuente said. “I don’t know, I’d have to look at it. I go back to, I just like the way he goes about his business. I like the way his demeanor is in the game. You can communicate with him, he understands what’s going on and he can handle adjustments.”

Virginia Tech’s rushing attack also took a giant step forward on Saturday. The Hokies made a concerted effort to run the ball at East Carolina early, and it helped open up the passing game. The Hokies finished with 287 yards on the ground, led by Travon McMillian and Deshawn McClease with 72 and 55 yards respectively. After averaging just 2.9 yards per carry last week vs. Delaware, Virginia Tech averaged 4.6 yards per rush on Saturday.

“We felt like getting movement up front was kind of the key,” Fuente said. “That’s kind of pretty simple, but we knew they were going to move — stem and move their front — and we really wanted to try and find some way to create movement. I thought the backs ran hard, and our guys did a good job blocking on the perimeter, to spring some things. Then, our offensive line played better.”

“Like I said, our kids did not panic,” defensive coordinator Bud Foster said. “That was the one thing, I was really proud of them. They did not point fingers, they were looking at us and obviously we made some adjustments. We kept our calm as a staff and told them, ‘Hey, it’s a long game, we just need to settle down and do what you’ve been taught, and go execute and it’ll all work out.’ The kids settled down and executed the plan, and then that’s when the screws tightened down a little bit.”

East Carolina looked like they could compete in the first quarter. The Pirates, who came into the game 0-2, blitzed Virginia Tech early. The Pirates marched down the field on their first possession for a touchdown, and Gardner Minshew threw a 76-yard touchdown pass on the second drive to give East Carolina a 14-7 lead midway through the quarter. The Pirates added a field goal later in the first, taking a two-score lead, 17-7.

“They hit us with a nice, long play, that first play,” Foster said. “We were in a two-deep look, and they ran a little iso-pass, slipped the linebackers. Just a good call and a good play on their part. But those next couple plays were discouraging for me, from the standpoint of big plays. We just kind of played poor technique fundamentals. Once we settled down though, as you guys saw, I mean we really settled down.”

Down 10 points on the road to a winless team, Virginia Tech was able to keep their composure on the field and on the sidelines.

“We knew that they were going to come out and kind of give us a fight,” said placekicker Joey Slye, who went 3-3 on field goal attempts. “Coach (Fuente) was talking about all week how their backs are kind of against the wall, with how their season is going right now. We knew they were going to come with a punch, but through the offseason training we’ve put in, and the mindset that Coach Fuente, the coaches, Coach (Ben) Hilgart have instilled in us, we were trying to see if we could put this game to where the heat was affecting them and not us. I felt like we did that.”

Tech showed their resilience in the second. Jackson led the Hokies to 17 straight points in the second quarter alone, giving Tech a 23-17 lead heading into halftime. The offense got rolling in the third, as Tech scored five touchdowns.

“I’ve been on the other side of these before, and it’s not very fun,” Fuente said of the blowout. “But it was nice of us to respond there.”

Virginia Tech’s win comes after a rather uninspiring victory over Delaware last week. In that 27-0 win, the offense looked out of rhythm all game long. On Saturday, that was definitely not the case. Foster said after the game that the offensive output made his job easier.

“It’s a… that’s pretty nice,” Foster said. “Particularly, you get in certain situations in the game, it just changes your mindset. In the past, maybe I’d like to run some more 30-defense or something in third down, where when it’s a tighter ballgame, you can’t do those kinds of things because the team will run the ball.”

Virginia Tech is now 3-0 to start the 2017 season. Saturday was Tech’s first true road win, and Tech will return home next weekend. The Hokies will host Old Dominion, and kickoff is scheduled for 2 p.m.

Phillips had himself a day statistically, and broke Virginia Tech’s single-game receptions record. Phillips hurt the Pirates in multiple ways, whether it was taking open catches underneath or making plays over the top.

“I didn’t even know I had it until my teammates were telling me about it,” Phillips said of the record. “It feels good. The coaches calling the right plays, Josh giving me a chance on those passes and trusting me, and I just made the plays when it came to me.”

“We had some good looks to get him the ball underneath, through I don’t know how many out-cuts vs. off and inside leverage,” Fuente said. “He and Josh executed, and eventually, some big plays came a little bit later on.”

Slye’s three field goals made him the career leader in field goals made [69] in Virginia Tech history. Slye overtook the record from former kicker Shayne Graham. Slye was happy about the record, but also happy to get out his slump. Coming into the game, Slye was 3-7 on field goal attempts.

“The first game was a hiccup. I’ve honestly never experienced it in my life, in any facet of sports, going all the way back when I was a little kid,” Slye said. “It was something my kicking coach and my parents told me, it might have been something that needed to happen for some wisdom, some experience under your belt.”

Divine Deablo played a significant amount of snaps on Saturday at free safety. Terrell Edmunds moved to rover to replace Reggie Floyd, who allowed the 76-yard touchdown pass in the first quarter.

“We were playing a quarter, quarter halves coverage, and he was the deep safety,” Foster said. “Just didn’t get quite deep enough, and Reggie is a really good football player. There’s some things he continues to — he’s a young player, and a player away from the line of scrimmage — that he continues to work on.”

Virginia Tech’s pass defense had to not only focus on East Carolina, but replace starting cornerback Adonis Alexander, who did not make the trip with the team. Brandon Facyson and Greg Stroman played a majority of the snaps at corner, with Stroman picking off Gardner Minshew right before the end of the first half. Tyree Rodgers and Bryce Watts played corner as well in mop-up duty.

“I thought we were a little tight early,” Foster said on not having Alexander. “But then we settled down and played really well. We had a chance for a pick, we had a chance for a couple of other picks. I thought we had some good, tight coverage. We did a variety of things and tried to change up a couple things. I think we were decent on third down, but would have liked to have been a little bit better.”

Virginia Tech’s defense gave up yards through the air early on, but bottled up East Carolina’s running game entirely. The Pirates were basically one-dimensional all game long, and ran for just 40 yards on 31 carries.

“That was the one thing, I challenged our D-line, is we didn’t want them to get the run game started and it never did,” Foster said. “I don’t know what they ended up with, I know they got some cheap yards at the end of the half and things like that, but that was critical for us. We couldn’t allow them to be two-dimensional.” 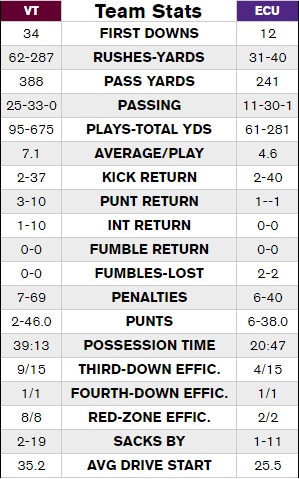 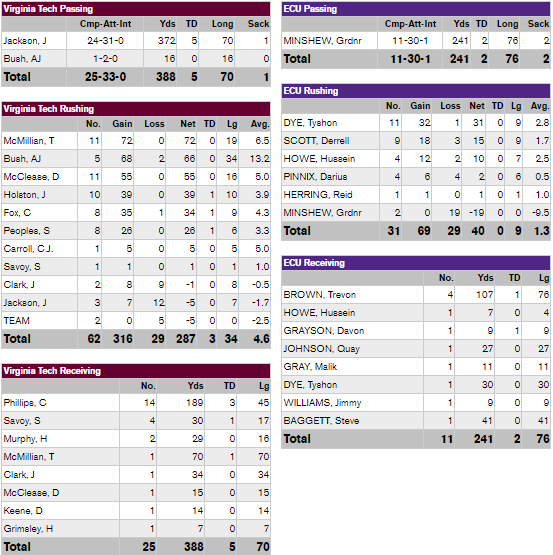