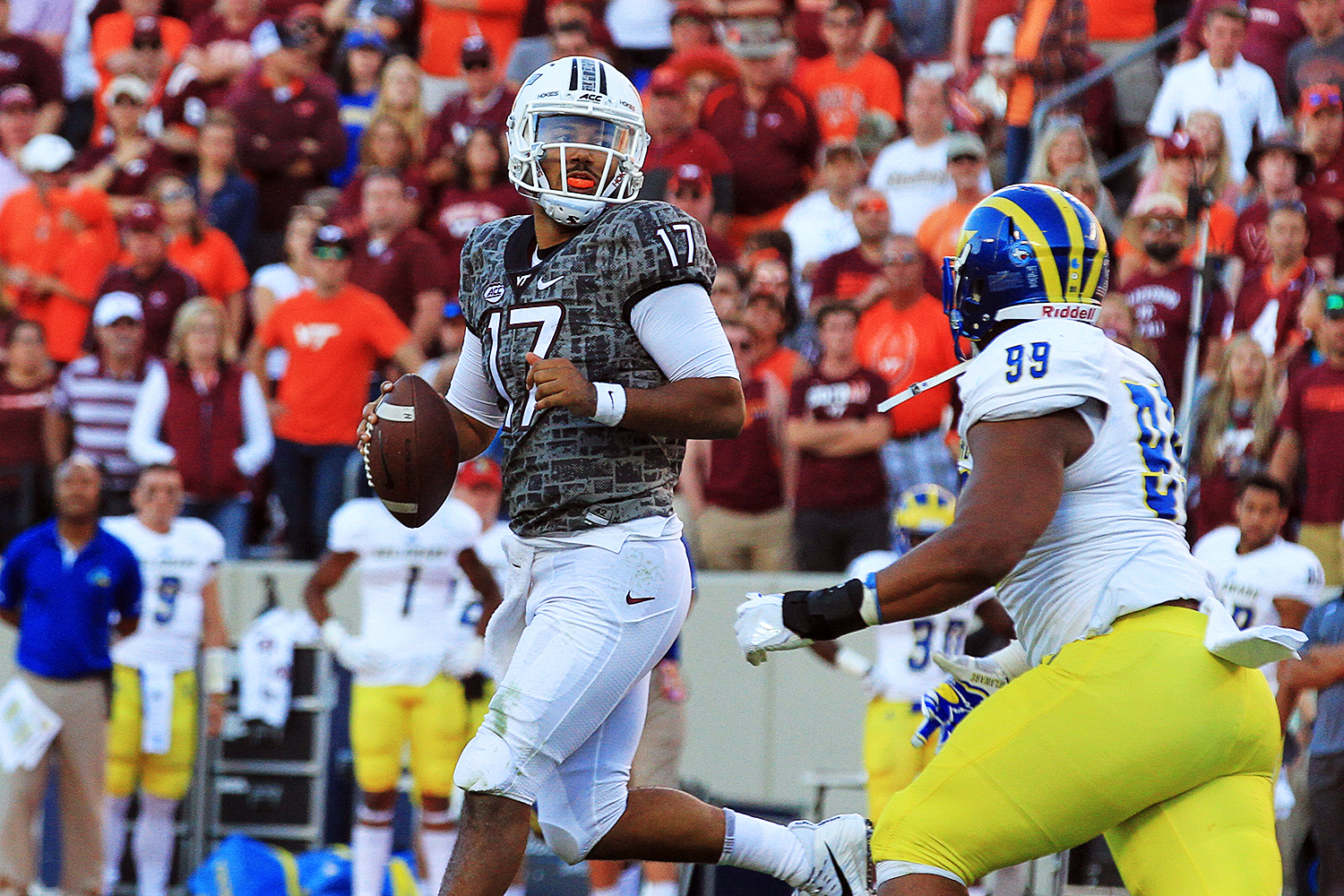 Not that Jackson played poorly, but based off the standard set vs. West Virginia, it wasn’t a banner day for the redshirt-freshman. Jackson finished the game 16-28 with 222 yards passing with two passing touchdowns. Even though those numbers are shockingly similar to his week one performance vs. West Virginia, Jackson knows he needs to be better.

“We just weren’t clicking like we have before, consistently,” Jackson said. “So, that happens, but thankfully we have a great defense behind us, so we’ll get that all fixed this week.”

“Like you said, we’re in third and medium, or third and long, and that’s just us,” Jackson said. “I wouldn’t say it’s on the play calling at all. Coach (Cornelsen) does a great job. So, that’s just us executing on third down, and that’s something we’ve got to work on.”

Even though Delaware wasn’t his best game, Jackson still sees the team growing as a whole.

Part of Jackson’s challenge vs. East Carolina will be adapting to the defense he sees on the field. The Pirates “reassigned” former defensive coordinator Kenwick Thompson, and elevated defensive line coach Robert Prunty to the position. Like head coach Justin Fuente said on Monday, there’s only so much that can be changed in a week’s time.

“I think it might throw us a little bit of a curveball, but you don’t know how much they can really change in a week,” Jackson said. “Right now, you’re just focusing on the past two games, last season and everything like that. You do maybe have to check out some old film from that coordinator or something like that, but we’ll kind of see what happens when we get into the game.”

Without getting into specifics, Jackson said that he feels comfortable with what East Carolina could throw at him.

“They’re not too complicated,” Jackson said. “They have all their calls and I think they run them well. They seem like a good defense and I’m looking forward to going against them.”

Foster preparing for new No. 2 at mike, two quarterbacks

On the defensive side of the ball, Bud Foster not only must prepare for two quarterbacks, but he must get Sean Huelskamp ready to be the No. 2 mike linebacker. Virginia Tech indefinitely suspended Tavante Beckett on Monday, who occupied that role in the spring and the first two weeks of the 2017 season. Huelskamp, a redshirt-senior, served in the backup role at mike last season, but was passed by Beckett in the spring. Since then, Huelskamp has been working mostly at backer.

“I’ve got a lot of confidence in Sean,” Foster said. “He’s actually playing both mike and backer right now, but he’ll exclusively be working at mike for this ballgame.”

“We do have some young guys that are in position to play, particularly Rayshard Ashby, at the mike spot,” Foster said. “I really like him. I like his football IQ, I like how he plays, he really performed well in our scrimmages. He’s playing right now, playing right now with the idea that he can play and be ready to play as we move forward in the future.”

As far as Beckett is concerned, the program is staying quiet on his suspension and legal trouble. His future with the team is in doubt.

“Yeah, I don’t know all of the — you’d have to talk to Coach Fuente,” Foster said on Tuesday. “Whatever’s been said has been said. I’m planning on him coming back, but I don’t know.”

As far as the East Carolina quarterbacks are concerned, Foster faces uncertainty. The Pirates started Gardner Minshew in week one vs. James Madison, and he was then benched for Duke-transfer Thomas Sirk. Sirk started game two vs. West Virginia, and was knocked out of the game with concussion symptoms. Sirk is currently in concussion protocol, and his availability vs. Virginia Tech is unknown.

“I understand that Sirk is in concussion protocol, whatever that is, but I fully expect him to play and be ready to play,” Foster said. “We’re preparing for East Carolina and their offense, it’s not just particularly one quarterback or another.”

Even if both quarterbacks play, East Carolina’s offense likely won’t change. Foster says Minshew and Sirk have similar skill sets, and the play calling doesn’t change depending on who’s on the field. No matter who plays, the results haven’t been terrific. Minshew and Sirk have combined to complete just 51 percent of their passes for just two touchdowns and five interceptions.

“This is not like the Duke offenses, where you had one quarterback and another would come in, and he would do something different and it would be a running game, or a power-run game by the quarterback or that type of thing,” Foster said. “They’re running their offense. They’re trying to find the hot guy, is what it looks like to me.”

Patterson, a redshirt-freshman, nearly played in 2016 but has fallen on the depth chart at wide receiver. He has yet to play this season, and it is unclear whether or not he will return this season. However, Fuente does sound rather confident he will be back.

“We’re very optimistic to have him back, yes,” Fuente said.