Fresh off a dramatic 31-24 victory over West Virginia, No. 18 Virginia Tech returns home for their season opener and their first-ever meeting with the Delaware Blue Hens.

Because they played on Sunday night, the Hokies took Monday off and began preparing for Delaware on Tuesday. That gives them a short week to prepare. Meanwhile, the Blue Hens played their season opener on Thursday, August 31. They knocked off in-state rival Delaware State 22-3 that night, and they’ve had a lot more time to prepare for this game than Virginia Tech.

Will that make a difference? Let’s get to know Delaware a little bit better. 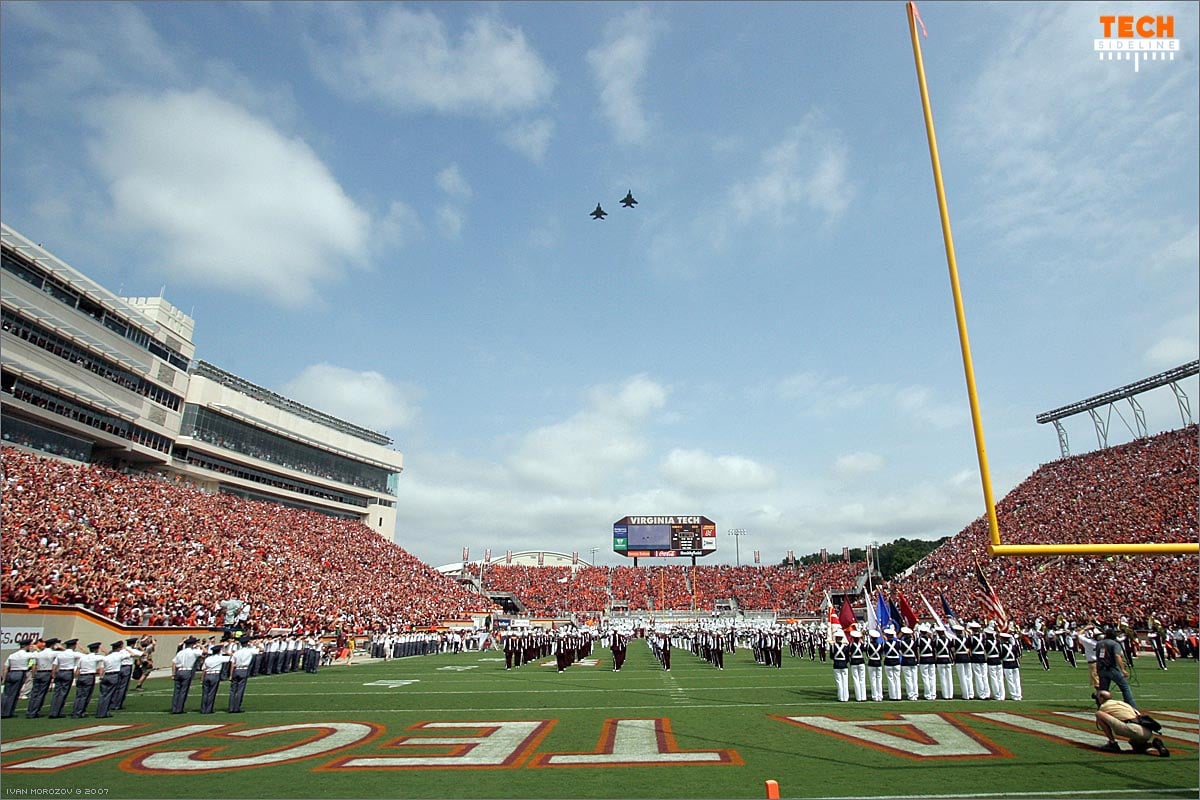 Danny Rocco and the State of Virginia

The Delaware Blue Hens will roll to Blacksburg with a name that will sound familiar to you. Danny Rocco is in his first season as Delaware’s new head coach, and he is looking to take the program back to its former greatness.

Tech fans know Rocco well from his time in the state of Virginia, which dates back all the way to 2001. He has served in a head coaching role since 2006.

Rocco is also a good coach. He’s never had a losing record, and his teams have finished ranked in eight of his 11 seasons as head coach. After leading the Richmond Spiders to back-to-back top-10 finishes, he departed for Delaware.

Other Names You Would Recognize

Delaware defensive coordinator Chris Cosh played linebacker at Virginia Tech from 1977 through 1981. He has since coached at Maryland, UNLV, Minnesota, Illinois, Michigan State, South Carolina, Kansas State, South Florida, Buffalo, North Texas, Richmond, and a few others sprinkled in. He’s coached the defensive line, defensive backs and linebackers during his career, and he’s also served as a defensive coordinator at various schools. It has been a very Phil Elmassian-like career for the VT graduate.

Clint Sintim coaches the outside linebackers for Delaware. He was an excellent linebacker at Virginia, where he led the nation in sacks as a senior in 2008. He then played in the NFL for the New York Giants. He is a Fairfax native.

The Blue Hens have a rich history of football success. They won the Division II National Championship 1979 and quickly made the jump to 1-AA, where they were the national runner-ups in 1982. They won a National Championship in 2003, and they have finished second a grand total of three times since 1982, including as recently as 2010. They also went to the National Semifinals on three other occasions. Overall, they have won six National Championships at various levels. Delaware was the only FCS program to average more than 20,000 fans per regular-season home game for each season from 1999 to 2010, so expect to see some traveling Blue Hens on Saturday.

Delaware was a program built around the Wing-T offense, and many high schools in the state emulated the college program by running the same offense. Head coach David Nelson developed the Delaware version in the 1950s, and it became the face of the program for half-a-century.

However, the program has fallen on hard times recently. They haven’t made the playoffs since they made the finals in 2010. Here’s a year-by-year synopsis…

To fix the problem, they hired Danny Rocco, and that was an excellent choice. Rocco took over a 1-10 team at Liberty and went 6-5 in his first year, and had them in the top-25 by year three. He’ll likely do a great job at Delaware, which has greater tradition, fan support and resources than Richmond.

Quarterback Issues for the Blue Hens

In week one, the Hokies faced a very talented quarterback in West Virginia’s Will Grier. They won’t be as challenged in week two. Delaware’s Joe Walker (6-foot-3, 205 pounds, r-Jr.) may be entering his third season as a starter, but he has struggled up to this point in his career.

Walker will face a talented defense on Saturday, and he’s a guy who has completed fewer than 50 percent of his passes in his career, with three times as many interceptions as touchdowns. He is likely in for a long afternoon.

To his credit, and the credit of new head coach Danny Rocco, Walker seems to have improved as a redshirt-junior. His numbers were better in Delaware’s week one victory over in-state rival Delaware State…

Those numbers are better, but they are far from good. The Tech secondary should have a very strong game on Saturday.

To try and protect Walker, look for Delaware to lean on the running game on Saturday. Walker is a decent runner himself (848 career rushing yards), but the workhorse will likely be tailback Thomas Jefferson. Jefferson is 6-foot-1, 210 pounds and a redshirt-junior, and yes, that actually is his name. He had two solid seasons in 2015 and 2016…

To have a chance of pulling the upset on Saturday, they’ll have to have an effective ground game again, because it’s very unlikely that Walker will be able to do anything against the Virginia Tech secondary with his arm.

The Delaware defense held Delaware State to just 224 yards of total offense last week, including 59 yards on the ground (2.1 ypc). That’s a dominating performance. That’s sort of what you would expect from a group that returned ten starters from last year.

Last season that defense was pretty good, allowing 349.7 yards per game. However, they were let down by an anemic offense that averaged just 324.4 yards per game. The Blue Hens lost a lot of tough games because they struggled to move the football.

That might turn out to be the case again this year, but Delaware’s defense should be more up to the challenge than they were a year ago. The Blue Hens will show Tech multiple fronts. Technically they run a 3-4, but like most 3-4 defenses, there is a lot of gray area between a defensive end and an outside linebacker. Delaware’s front seven isn’t as big as a typical 3-4 defense…

Bell led the defense in tackles a year ago with 94, and he also paced the club in tackles for loss with 11.5. Bilal Nichols had five sacks, but he represents the only dangerous pass rushing threat on the Blue Hen defense. The secondary was ball-hawkish with 15 interceptions a year ago, and they spread it out evenly. No player had more than two picks.

However, it is easy to see the Hokies being a bit sloppy in this game. They have a short preparation week, while Delaware had extra time to prepare. The West Virginia game was long and physical, and some players won’t be 100 percent. There’s also the emotional affect of going from a big rivalry game to playing an FCS opponent. That said, this is the first home game of the season, so there could be some emotional gain from that aspect.

Because Delaware’s offense appears to be extremely weak, this seems like a good game to work in those backup defensive linemen. I’d try to avoid playing Ricky Walker and Tim Settle more than 25 snaps. It lessens their chances of injury, it saves wear and tear for later in the season, and it gets those inexperienced backups more reps. Virginia Tech will need guys like Jerod Hewitt, Jimmie Taylor, Xavier Burke and perhaps Darius Fullwood before the season is over. This week represents a prime opportunity to get them a lot of playing time.

I picked Virginia Tech 38-10 in yesterday’s podcast, but upon further research, I’m not sure I see the Delaware offense doing too much, even if the Hokies do play their backup defensive line a lot. I’m altering my pick slightly.

Will Stewart’s Take: As I usually say about games like this, it’s not really about Delaware; it’s about Virginia Tech. With the short week, the accolades (Josh Jackson was on Jim Rome’s show yesterday, for example), and an FCS opponent on the heels of a hard-fought, emotional game against WVU, it would be perfectly normal for Virginia Tech to let down and not be at the top of their game.

I thought the same thing last year after the loss to Tennessee, and I predicted conservative scores for the next three games:

So, early last season, Justin Fuente’s Hokies came out strong after a big-time, draining (some would say embarrassing) loss to Tennessee at the Bristol Motor Speedway. They shrugged that game off and played at a high level for the next three games.

Will that happen Saturday? We’ll see. On today’s podcast (recorded yesterday), after a series of over/under questions from Ricky, I wound up predicting a 41-10 Hokies victory. While nothing would surprise me, I don’t see anything here, in Chris’s preview, that makes me want to go away from that prediction. Delaware is going to get better under Danny Rocco, but they’re in a rough patch right now.

I still believe Delaware will score 10 points. The final score will likely come late in the game, against the second-team defense. Other than that, this offense has zero chance of staying competitive with Virginia Tech’s defense.

Offensively, the Hokies will come out flat. They did it against Liberty last season, and against an experienced defense, I can see it again this week. Still, Virginia Tech’s offensive scheme will cause problems, and the talent level is simply better. The Tech offense will get rolling in the second quarter and by the time the Hokie Pokie used to play, this game will be out of reach, and us media-types will already be writing.