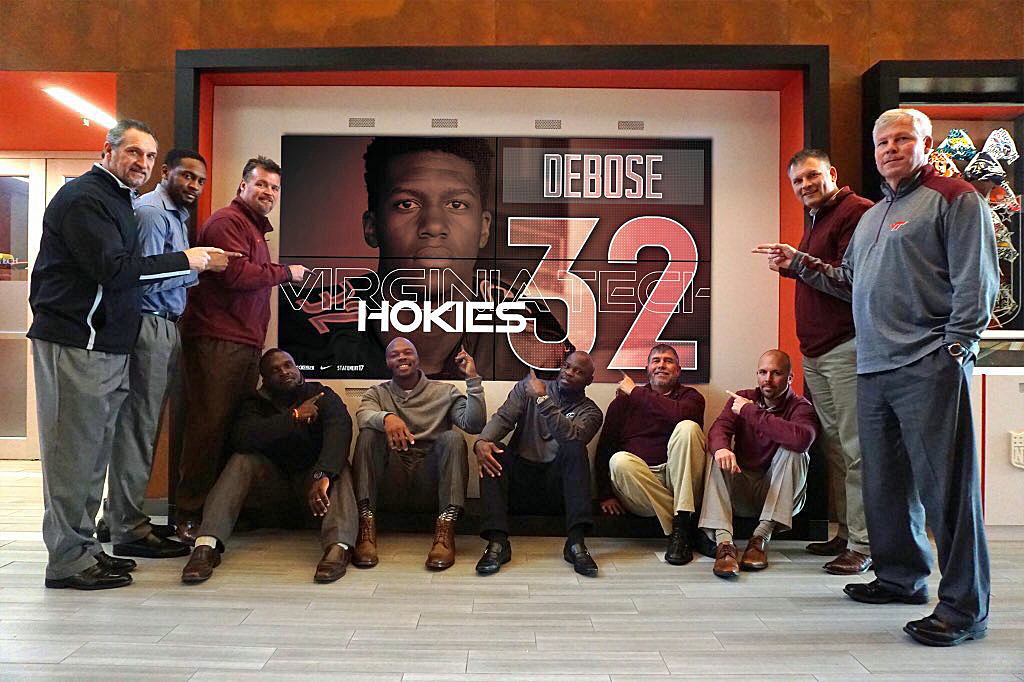 Virginia Tech is working hard to add to their defensive line as National Signing Day awaits on Feb. 1. The Hokies hosted multiple defensive linemen last weekend on official visits and will host another this coming weekend — Zion DeBose.

DeBose, a 3-star defensive end from Spencer, NC., is one of Virginia Tech’s remaining targets. DeBose is considering other schools as well, including Illinois, Pittsburgh and Missouri.

Last weekend, DeBose made his official visit to Pittsburgh. DeBose said he really likes Panthers Head Coach Pat Narduzzi and said he got to watch a Pittsburgh Steelers practice before their playoff game vs. the New England Patriots.

“Me and my parents loved it,” DeBose said. “I absolutely love the coaches, I love the love that they show me. Coach Narduzzi, he’s such a great guy and a great coach. Not only did he show me the program, he also made it pretty clear I was more of a need than a want for the program.”

DeBose officially visited Illinois on the Jan. 14 weekend and said the visit was better than he had expected.

“I was going in there expecting the regular Division I program stuff,” DeBose said. “It’s the same thing with Pittsburgh. Coach Lovie Smith and Coach Hardy Nickerson and Coach (Mike) Phair made it clear that I am most definitely a priority. I am a need more than a want. Hearing that from them sounds good, but it actually mean something when I was hearing it from the players. They were telling me that they’re real short. They’re going to need people to step up and be ready.”

DeBose said that he’s enjoyed all of his visits so far, but that he’s not putting all of his stock into them.

“I want to go somewhere where the foundation of the team is based off of the brotherhood and how the team moves as a unit,” DeBose said. “Anybody can go to a winning program, but I feel like you’ll enjoy the game if you’re playing beside people you have a strong relationship with. Not just the players, but the coaches.”

DeBose said he’s also hoping for a chance to see the field early on in his career, something he might find at Virginia Tech. Presumed starters Vinny Mihota and Trevon Hill both underwent offseason shoulder surgery and will miss spring practice. Behind them, Virginia Tech has Jimmie Taylor and possibly Emmanuel Belmar, both of who will be redshirt-freshmen next season. Belmar is listed at linebacker, but could drop down to defensive end this spring.  Houshun Gaines is the only defensive end who has game experience who isn’t hurt right now.

The Hokies have other options coming in for the Class of 2017, so it won’t be a cakewalk. Nathan Proctor and Robert Porcher IV are both committed, and Tech is still pursuing Tyjuan Garbutt and Brad Johnson, as well as DeBose.

“I know they have one or two defensive ends out because of shoulder injuries, so that leaves two starting defensive ends for spring ball,” DeBose said. “I know V-Tech is on the rise right now and they’re getting a lot of commitments. I’ve talked to one defensive end commit and I know they got another (Tuesday).”

DeBose is hoping to sit down with the Virginia Tech coaching staff this coming weekend when he makes his official visit to talk about the team’s situation at defensive end. Other than that, he feels like he has a good sense of what the Hokies have to offer.

Before his visit this weekend, DeBose and his family will host Pittsburgh’s Narduzzi and Missouri’s coaching staff for in-home visits. Illinois’ Smith was supposed to visit on Tuesday, but for some reason was unable to make it. DeBose still plans on announcing his commitment on Feb. 3, two days after National Signing Day.