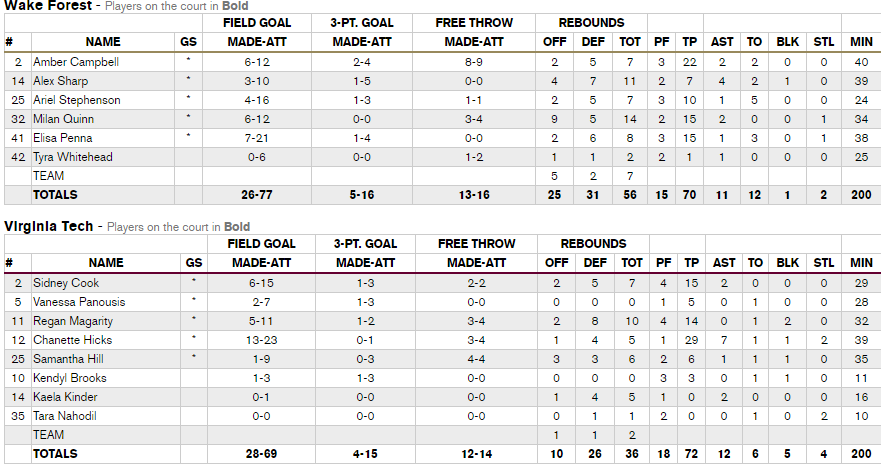 BLACKSBURG, Va. — Virginia Tech women’s basketball held off a fourth-quarter charge from Wake Forest for a 72-70 win over the Demon Deacons on Monday, giving the Hokies their 16th win of the season.

Chanette Hicks led the way for Virginia Tech, scoring 29 points, dishing seven assists and grabbing five rebounds. Hicks fueled a 15-0 run in the second quarter that gave the Hokies a lead they held for the rest of the game.

“She’s unlike anybody else in our league, in my opinion,” said Wake Forest Head Coach Jen Hoover. “She’s just so fast and just loves to play defense. She wreaks havoc on other teams.”

It was far from Tech’s best game of the season. The Hokies shot a combined 8-32 in the first and fourth quarters and were outrebounded 56-36 by Wake Forest. Twenty-five of Wake’s 56 rebounds came on the offensive end.

“It was definitely tough,” Cook said. “(Milan) Quinn is a great rebounder and Coach (Jennifer) Brown was telling us while we were preparing for them, ‘You have to box her out twice’. I don’t think we, including myself, did that. We still won, but there’s no way we’re going to be able to win a game 20 rebounds down.”

Both offenses came out of the gates cold as ice. Tech and Wake shot a combined 5-19 midway through the first quarter and never found a rhythm offensively. Wake Forest eventually made some shots, and thanks to a 11-2 run that went into the beginning of the second quarter, the Deacons led 22-9 with 7:38 left in the half.

Virginia Tech Head Coach Kenny Brooks called timeout and had a clear message — get the ball inside to Regan Magarity.

“I even asked my staff the stats, how many shot attempts (Magarity) had and she was 1-2 15 minutes in,” Brooks said. “Like I’ve said before, it’s not necessarily we have to throw the ball into Regan so she shoots it every time, but we need to give her touches because No. 1, she’s one of our better passers, but getting the ball to her puts a lot of pressure on the inside. She’s very productive down there.”

“It was more of a one pass and shoot,” Hicks said. “Coach was saying, ‘We’re making it easy for them not to guard us.’ We passed it around, attacked the basket and just made the extra pass.”

The Hokies rallied after the timeout and immediately went on a 15-0 run to take a 26-24 advantage with 2:41 left in the quarter. After the timeout, Virginia Tech would outscore Wake Forest 24-8 in the first half, giving the Hokies a slim 33-30 lead at the break.

“I think our kids continued to believe in themselves and believe in each other,” Hoover said. “We told them in the timeout how in the first half, it was easy to score on them. It’s not like we were asking them to do something they hadn’t done already. I think that gave them confidence and poise and we just knew if we continued to attack… we had been successful getting on the boards and the offensive glass, if we worked our offense and got the right look, we could create that. I thought we did a great job and I thought we did a great job getting stops during that time.”

From that point on, Virginia Tech made just enough plays to keep the lead. The two teams traded baskets for the final few minutes, until two free throws from Samantha Hill gave the Hokies a four-point lead with 13 seconds left, effectively ending Wake’s comeback bid.

“You never want to see a lead evaporate, but the way it did, we still kept our head enough to make plays down the stretch,” Brooks said. “All that is going to be a plus when it comes to developing the character of your team.”

Tech’s win puts them back on the right track after a close loss to No. 14 Miami on the road. The win couldn’t have come at a better time, as the Hokies prepare to play both Duke and Florida State in the coming days. Virginia Tech will travel to No. 15 Duke on Thursday and host No. 7 Florida State on Sunday inside Cassell Coliseum.