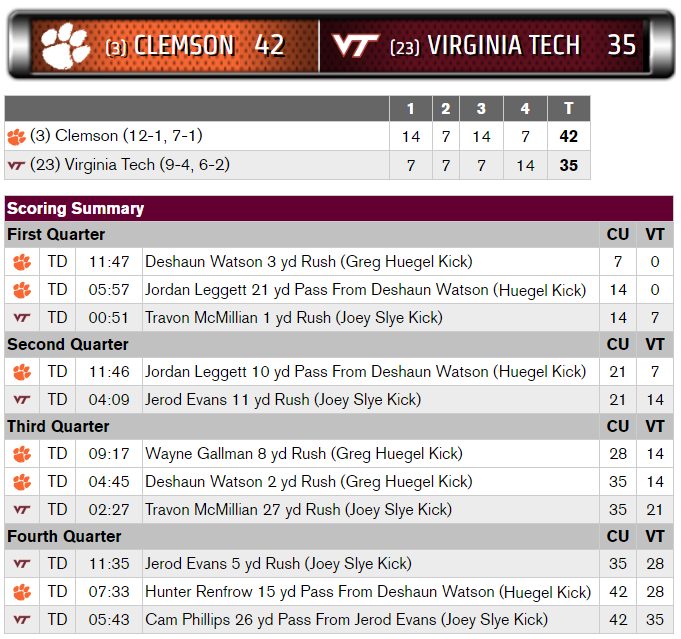 ORLANDO, FL. — Virginia Tech didn’t just show up to Orlando at Camping World Stadium to participate in the ACC Championship vs. Clemson. They came to win, but they didn’t.

The Hokies led a furious comeback in the latter part of the second half and had an opportunity to tie the game, but failed on a fourth and long to lose to No. 3 Clemson 42-35.

“I’m awfully proud of our kids,” said Head Coach Justin Fuente. “They showed up to win the ballgame. It’s a pretty somber locker room, because of that. Because they didn’t just come to play a close game or do anything other than to win the ballgame. Obviously we came up a little short, but it wasn’t because we’re not out there competing.”

“We came here to win. We expected to win,” said Travon McMillian, who ran for 37 yards and two touchdowns. “We weren’t just here to participate.”

Clemson’s Deshaun Watson was stellar just about all night, completing 23 of his 34 pass attempts for 288 yards and three touchdowns. Watson also ran for 85 yards and another two scores. Virginia Tech pressured Watson on numerous occasions, but Watson was able to evade the rush and keep drives going. The Hokies failed to register a sack.

“We had some good pressure on him a couple times, they’ve just got some dynamic athletes at all spots,” said Defensive Coordinator Bud Foster. “He threw the ball up a couple times, and guys went up a couple times and made some plays. Our kids played hard. We weren’t as sharp, particularly early, defensively. We jumped out of gaps.”

Virginia Tech’s Jerod Evans had a great night himself. Evans threw for 264 yards and a touchdown while rushing for 46 yards and two touchdowns. Evans did throw two interceptions, one on Tech’s final offensive drive.

Down seven with just over a minute to play, Virginia Tech faced a fourth and six from the Clemson 23-yard-line. The Tigers sent a heavy blitz up the middle and hit Evans as he threw. Evans’ pass was intended for Bucky Hodges, but was underthrown and picked off by Clemson’s Cordrea Tankersley. Clemson ran out the clock after the turnover.

“It was pretty much an option route,” Evans said. “If the corner bails, he runs a 10-yard out. If he presses, then he’s going to go through a go route. I couldn’t step into that throw like I wanted to, I had a man in my face so I couldn’t.”

“They just sent a lot,” McMillian said. “They twisted up front and sent some guys. They just got a lot of pressure on us.”

To get to that position, Virginia Tech had to bounce back after a disastrous start. Clemson took their first drive down the field with little resistance from the Hokies’ defense. Watson capped off the drive with a  3-yard touchdown run to give the Tigers a 7-0 lead.

Clemson’s torrid start continued on their next possession. The Tigers benefited from two pass interference calls, one on a third down, and kept the drive moving. Watson added to the lead with a 21-yard pass to Jordan Leggett to put Clemson up 14-0 with six minutes to play in the first. 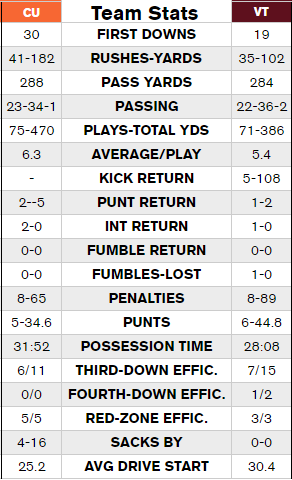 Virginia Tech’s next drive stalled but Fuente dug into his bag of tricks. Facing a fourth and 10 from the Tech 38-yard-line, the Hokies ran a fake punt play that had punter Mitchell Ludwig throwing to rover Terrell Edmunds. Edmunds made the catch for 20 yards and gave Tech a first down.

The call gave Virginia Tech some momentum. The Hokies fought their way into the redzone and McMillian capped off the drive with his first touchdown run of the day, cutting Clemson’s lead to seven with under a minute left in the quarter.

The pass interference calls continued to plague Virginia Tech on Clemson’s next drive. Anthony Shegog was called for pass interference on a third and 10, allowing the Clemson drive to continue. The Tigers capitalized and Watson threw another touchdown pass to Leggett to make it 21-7 with 11:46 left in the second quarter.

“A couple of those throws weren’t close, that’s the frustrating part,” Foster said. “We’re talented enough that we just need to go play technique and fundamentals and not get caught up in grabbing or doing those things. We don’t need to do that. That was frustrating, because we had a chance to get off the field.”

Virginia Tech didn’t quit. With just over six minutes left in the half, Evans connected on a 53-yard pass to Isaiah Ford to put the Hokies inside the redzone. Evans capped off the drive with an 11-yard run to cut Clemson’s lead to 21-14, which would hold until halftime.

The third quarter might have been the difference in the game. After punting on their first drive, Virginia Tech intercepted a tipped pass to give them possession at Clemson’s 38-yard-line. The Hokies went nowhere and were forced to punt.

“It was disappointing, it certainly was,” Fuente said. “That was a big play, we had a short field, didn’t do anything with it, didn’t execute very well.”

Clemson dodged the bullet and scored on their next possession, thanks to an 8-yard run by Wayne Gallman. The Tigers added another touchdown just two drives later and took a 35-14 lead with 4:45 left to go in the third.

Prior to this point, Virginia Tech had -12 yards total and had zero first downs in the third quarter.

“Everything we did out there was challenging when you’re playing a team like that,” Fuente said. “Making a first down is hard, making a stop is hard, executing a kickoff return or a kickoff was difficult. We’re playing one of the best teams in all of America. You’re going to have to understand going in they’re going to make some plays.”

Momentum shifted on Tech’s next drive. Facing a third and nine, Evans hit Hodges on a 42-yard pass to put Virginia Tech in Clemson territory. Just two plays later, McMillian took an outside run to the house from 27 yards out, pulling the Hokies within two scores before the fourth.

“It gave us some energy on the sideline,” McMillian said. “It gave us some hope, knowing that we were still in the game. Once we had that momentum, we started coming back but kind of just fell short at the end.”

The Hokies’ momentum continued at the start of the fourth quarter. Evans engineered a 12-play, 65-yard touchdown drive, including two third down conversions to Cam Phillips. Virginia Tech trailed 35-28 with 11:35 left to play.

Clemson’s offense, which had been stymied for a bit, awoke at just the right time. Watson converted a third and 15 from midfield with a 30-yard pass to Deon Cain and then threw a 15-yard touchdown pass to Hunter Renfrow, who was wide open on a screen pass.

“It was pretty tough,” said Ken Ekanem. “They’re talented all the way around. We made a lot of mistakes to start off the game and they capitalized on them. They’re a good enough team, we don’t need to help them with penalties and just not doing our assignments. When we mess up, they’ll make it hurt.”

Down two touchdowns yet again, Evans went to work. He threw a 32-yard pass to Sam Rogers out of the backfield and later threw a 26-yard pass to Phillips for a touchdown, trimming Clemson’s lead to just 42-35 with 5:43 remaining.

“He did some good things,” Fuente said of Evans. “Kind of settled down a little bit and we hit on a couple runs. We felt like if we could ever get a little drive going, it’s just hard to walk out there when that defense is fresh and just march the ball down the field. It’s not going to happen very often. If we could ever sustain a few drives and get them moving around a little bit, we felt like we could do a little bit and we did that at times and Jerod got in a nice rhythm there at the end and made some big plays.”

On the final drive, Evans was masterful, connecting on passes of nine, eight and 14 yards to put Virginia Tech into Clemson territory. Despite his play, he couldn’t quite finish the drive.

“I think we answered the bell,” Evans said. “We feel confident playing against anybody. They just made more plays than we did.”

“I told them the reason it hurt so bad is because they sold out for the cause,” Fuente said. “They poured their heart and soul into winning the game. They believe they were going to do that and they came up short. There’s nothing that I can tell them to make them feel better, because they did do that. That’s why it’s disappointing, but I’m awfully proud to be able to sit in front of you all and tell you all that I’m their coach.”

Virginia Tech’s season isn’t yet over. The Hokies will play in their 24-straight bowl game, but won’t know until Sunday which one.

“This is just the beginning,” Motuapuaka said. “I’m thankful to the seniors, they taught me a lot on how to lead. I have one more year left. I’m just ready to lead, to put into place what the guys taught me. I’m going to miss them so much. They’re my brothers. They’re close to my age so the younger guys don’t really understand but I’ve been through everything with these guys. We’ve got one more game to send them out right.” 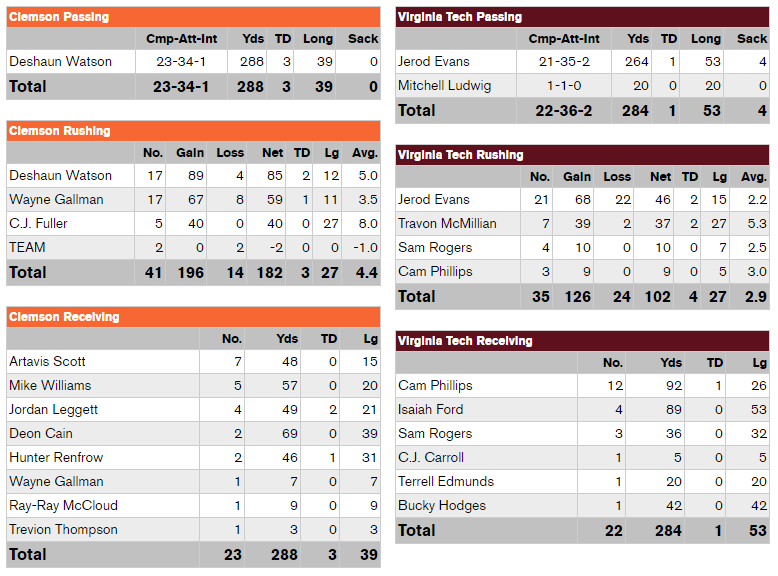