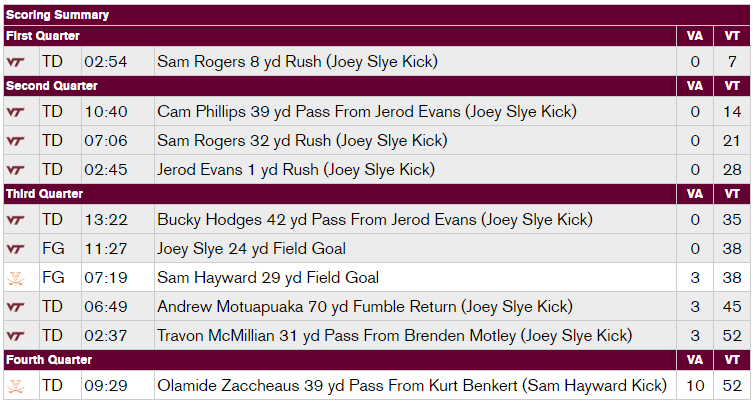 Blacksburg, VA. — Virginia Tech’s games vs. in-state rival Virginia have been close in recent years, but that wasn’t the case on Saturday.

The Hokies dominated Virginia in every facet of the game, and thanks to an inspiring Senior Day performance from Sam Rogers, Virginia Tech routed Virginia 52-10.

The win is Virginia Tech’s 13th in a row over Virginia. The last 10 senior classes at Virginia Tech haven’t lost to Virginia in their careers.

“These games are personal to them,” said Virginia Tech Head Coach Justin Fuente. “There’s a little bit of, not just pride, but responsibility that comes with playing football here. Our seniors have set great examples of those things. I could go down the list of all of them, but I’m awfully proud and happy for them.”

The Cavaliers were outclassed in every way possible. Virginia Tech outgained Virginia in yardage 579-247 and scored 45 points in the second and third quarters alone.

Rogers led the way for Virginia Tech with a career-defining day. He totaled 134 yards (105 rushing, 29 receiving) and two touchdowns on Saturday, all while wearing the No. 25 in honor of Frank Beamer.

“God is just so good just letting me be a Hokie,” Rogers said. “I’m forever thankful for these fans and this community and everything in Hokie Nation. Obviously a lot of emotions came over me coming out of the tunnel, just thinking back on how fast this time has gone by, but we’re not done yet. I’m happy to keep this thing rolling.”

“Our jobs as coaches is to influence young people’s lives for the better, in terms of fundamental skills of work ethic and doing the right thing. Every now and then, you come across a guy, a player, that actually has that effect on the coaches,” Fuente said. “That’s the kind of guy that Sam is.”

Jerod Evans had himself quite the day, too. Evans set the school record for touchdown passes in a single season, breaking the record previously owned by Tyrod Taylor. Evans threw two touchdowns and ran for another, compiling 291 total yards.

Evans said that it meant a lot to him to help send off Virginia Tech’s seniors in winning fashion.

“I told a lot of the seniors coming in the spring, not knowing me from Adam and Eve, that if I ever got the starting job that this season is dedicated to them,” Evans said. “I’ve seen how much work they put in, how hard they work and to come up short their three or four years here and have mediocre seasons, I just wanted to dedicate the season so they can go out the right way. For them to beat UVa on their last go around and the position that we’re in, to do what we’re still trying to do and accomplish, it’s a great feeling.”

The Hokies tacked on three touchdowns in the second quarter. Evans led a 10-play, 99-yard drive that ended in a 39-yard touchdown pass to Cam Phillips to put Tech up 14-0 early in the quarter. Tech followed it up with another long drive as Rogers scampered 32 yards for another touchdown. Evans added another score on the next drive to give Virginia Tech a 28-0 lead heading into halftime.

“Once our offense gets going, it gets all of us energized and we start playing at a really high level,” said Ken Ekanem. “Once they get going, it’s kind of a game over from that standpoint.”

The lead was indeed insurmountable, thanks to a suffocating Virginia Tech defense. The Cavaliers mustered just 94 yards in the first half and never found a rhythm. Virginia subbed quarterbacks Matt Johns and Kurt Benkert in and out frequently throughout the game and neither got anything going. The two combined for just 13 completions on 36 attempts for 139 yards and two interceptions.

“We felt like they gave us great run-pass indicators,” said Defensive Coordinator Bud Foster. “Any time when you know they’re going to throw the football, it allows your kids to really play more aggressive and kind of get off from that standpoint.”

The lone bright spot for Virginia was running back Taquan “Smoke” Mizzell, who ran for 51 yards on just nine first half carries. Mizzell would finish with 113 yards.

Tech removed all doubt over the outcome in the third quarter. Evans found Bucky Hodges for a 42-yard touchdown pass on the Hokies’ first drive, Slye hit a 24-yard field goal on the next possession and Andrew Motuapuaka returned a fumble by Virginia’s Connor Brewer, their third quarterback, for 70 yards and a touchdown. Brenden Motley capped off the quarter with a 31-yard touchdown pass to Travon McMillian, giving Virginia Tech a 52-3 lead heading into the fourth.

Motley, a redshirt senior, played a good portion of the second half and after throwing the touchdown, he was greeted on the field by several teammates, including Evans.

“It means a lot,” Evans said. “The young man has so much character. We were fighting for the position and all he does is want this team to be successful. For him to get in the game, UVa week, senior, and go out there and throw a touchdown and operate the offense like we know he can, it’s a great feeling.”

“I liked it, except for guys running onto the field,” Fuente said with a slightly sarcastic tone. “I thought it was really cool. I was glad it happened, that it all worked out, the way the play was designed. It was a nice little reward, I guess. A kid that has worked hard and done so much and done things the right way and helped this football team through ways people will never even know.”

Motley finished his final game in Lane Stadium 2-3 for 37 yards passing and a touchdown with another 32 yards on the ground.

Saturday was easily Virginia Tech’s most complete performance since the beginning of the season. It was the most lopsided game in the series since 2011, when Virginia Tech walloped the Cavaliers 38-0 in Charlottesville.

“I think it’s the seniors, this being their last home game,” said Cam Phillips. “We really wanted to do a great job of putting together a pretty good performance, just sending those guys out the right way because they’ve done a whole lot to get the program where it is right now.”

“I think of this game as a statement game, to tell Clemson that we’re coming,” Ekanem said. “I think we got the ball rolling. We’ve got to have a great week of practice and practice with a lot of energy and bring our A-game vs. Clemson down in Orlando. Those guys play at a really high level. We can’t afford to have hiccups here and there.”

Virginia Tech enters the ACC Championship Game with tons of momentum. It’s their first appearance in the ACC title game since 2011. They’ll take on ACC Atlantic winner Clemson, who will be battling for a spot in the College Football Playoff.

“It’s going to be a huge challenge,” Fuente said. “We’re going to need the entire Hokie Nation down there to help us out. The way I put it to the team is, congratulations. Enjoy it today, that’s your reward. You did a good job, you should enjoy it today. Tomorrow, we have to get ready for the next game.” 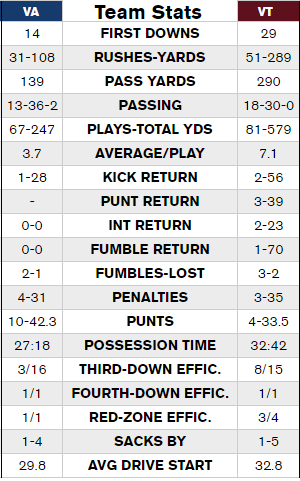 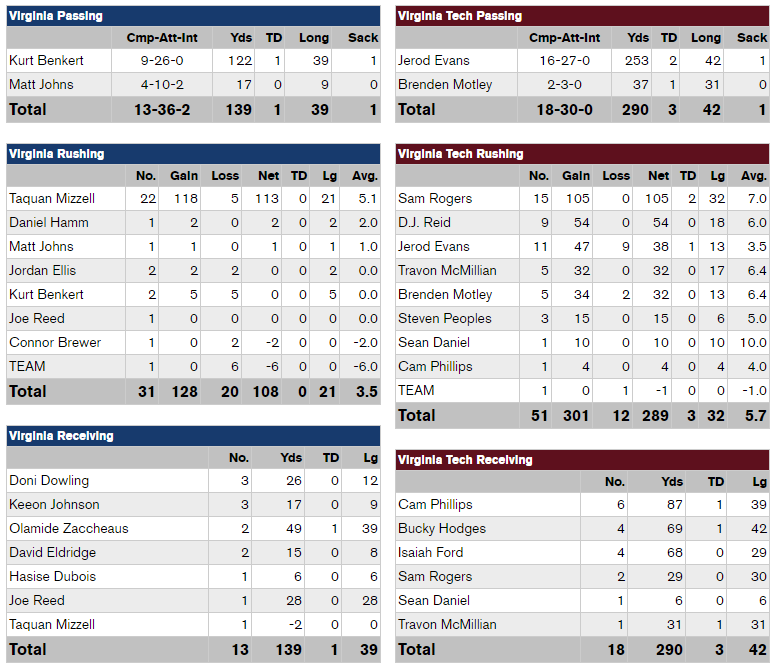