The Hokies found themselves in a similar situation on Saturday vs. Notre Dame, trailing 24-7 midway through the second quarter. Instead of caving like last week, Virginia Tech clawed their way back in the second half and rallied to beat the Fighting Irish 34-31 in a cold, windy, snowy South Bend.  The Hokies improved to 8-3 with the win, while Notre Dame dropped to 4-7.

“There’s no time for sulking out there in front of 80,000 people when things aren’t going your way,” said Head Coach Justin Fuente. “You can either go in the tank or you can pick yourself up and go back to work and that’s what (Evans) did and what you have to do if you’re going to play quarterback, and ultimately what the team did.” 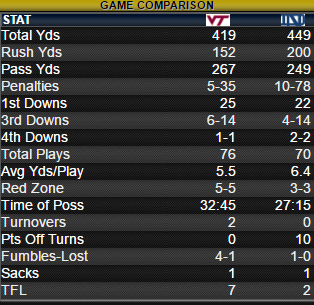 Tech’s defense completely changed the game in the second half, shutting down a Notre Dame offense that got off to a blazing start. The Fighting Irish scored just seven points and totaled 150 yards in the second half, a far cry from their 24-point, 299-yard first half.

“They did some different things in the first half. I’m really proud of our kids. They worked the game, we were adjusting it and adjusting it and adjusting it,” said Defensive Coordinator Bud Foster. “The kids kept working with us. I told them we’d been down before against some different teams in the past, and we’re going to get this things turned around, just play one play at a time. There’s a lot of football. They hit us on a couple plays early that they had not shown, but our kids hung in there, played one play at a time. It was a tale of two halves. They did some unique things, we adjusted and the kids worked at it, we came out in the second half and played really good football.”

Meanwhile, Virginia Tech’s offense showed up late to the party, not scoring until the 11:28 mark of the second quarter. The Hokies amassed a grand total of four yards in the first quarter, but outpaced Notre Dame on the scoreboard 34-21 in the final three quarters.

“I don’t think there was any great revelation at halftime,” Fuente said. “It’s just, we’ve got to play better. We were out there dropping the ball on the ground, giving up big plays, just not playing Virginia Tech football. I think guys kind of settled down, got their feet underneath them, and I felt like if they would just execute, they would have a chance for success.”

His counterpart, Notre Dame’s DeShone Kizer, threw for 235 yards and two touchdowns, most of those numbers coming in the first half. The Fighting Irish jumped on Virginia Tech early, scoring on their first three possessions to take a 17-0 lead at the beginning of the second quarter.

Evans said that the 20-25 mph winds played a big factor early on for Tech’s offense.

“First quarter? Pretty bad,” Evans said. “I couldn’t get a grip on the ball. The one where I fumbled, it just slipped right out of my hand. I’m a Texas boy, so anything below 60 is super cold to me, but I definitely don’t let that affect me. I know my team is leaning on me, especially when I’ve got the ball in my hands 100 percent of the time.”

Notre Dame didn’t take long to respond to Virginia Tech’s first score as Kizer orchestrated a 7-play, 60-yard drive that ended with an 18-yard touchdown pass, giving the Irish a 24-7 lead with 6:00 to play in the half.

Tech stayed patient on offense and built off of their momentum from earlier in the quarter. Evans navigated the windy weather to put together a 10-play drive that resulted in a touchdown pass to Cam Phillips, cutting Notre Dame’s lead to 24-14 before the break.

“I’m never in a rush,” Evans said. “I don’t know, something about this game where I just felt like we were going to win. I have to stay cool, calm and collected, just for the guys, because as the leader, you don’t ever want to let them see you get flustered or get down.”

The Virginia Tech offense maintained their momentum after the break. Facing a third and three, Evans found CJ Carroll on a slant for a 62-yard catch and run, giving the Hokies first and goal from the six. Steven Peoples capped off the drive with a 2-yard run, cutting the lead to 24-21.

Carroll, who finished with three catches for 80 yards, wore the honorary No. 25 this week.

“25 is special,” said Cam Phillips. “Every week, it seems like 25 is making a play, whether it’s special teams, offense or defense. No different tonight. We have a lot of trust in CJ and he didn’t fail tonight, making a big play.”

“I wish he would’ve got in, that would’ve been special, but yeah that 25, I don’t know,” Evans said. “I think it does something to them. It gives them some special juice or something, I don’t know.”

With all the momentum, the Virginia Tech defense started to figure out Notre Dame’s offense. The Hokies forced quick punts on consecutive drives before allowing a gut-wrenching 67-yard touchdown run to Josh Adams, giving Notre Dame a 10-point lead with just under four minutes left in the third.

The run came after an Evans interception, where Phillips dropped a pass in stride that assuredly would’ve ended in six points. It was a 14-point swing.

“I’m really hard on myself so when that happened, I kind of got down because if I make that play, it’s a totally different game,” Phillips said. “Things like that happen. I bounced back, the team bounced back and we ended up getting a win.”

“He’ll make those catches nine times out of 10, Evans said. “Them going down to score, it was just something different on the sideline. Guys was ready. Didn’t flinch. When they ended up scoring 17 points to zero, the defense didn’t flinch.”

“I was pleased with how we did respond,” Fuente said. “Cam in particular, and the team. Obviously that was a big play. We felt like we were going to have a big pass play there that didn’t go our way.”

To start the response, the Hokies’ offense marched down the field inside the Notre Dame 5-yard-line, but stalled. Joey Slye added a 23-yard field goal to cut the Fighting Irish’s lead to just one score, 31-24.

From that point on, Foster’s defense completely shut down Notre Dame. The Irish went three and out on three consecutive drives in the fourth quarter, allowing the Virginia Tech offense to take over.’

“I don’t know how many series in a row there, where we were getting stops, I don’t know what the numbers were but there was a point in time when it became much more difficult to move the ball,” Fuente said. “I think that’s a credit to Bud and our defensive staff and knowledge of our scheme and how to manipulate to give ourselves the best chance. I think it’s a complement to our players in how they settled down and began to play the way we believe they’re all capable of playing.”

As the defense swarmed, the offense took advantage. Trailing 31-24 with 12:33 to play, Evans and Co. started at midfield and tied the game with a fade route to Bucky Hodges for a touchdown. Tech started their next drive just short of midfield and went on a 10-play, 51-yard drive that lasted over four minutes. The drive ended in another chip shot field goal from Slye, giving Virginia Tech a 34-31 lead with about four and a half minutes to play.

One last time, the Virginia Tech defense needed to make a stop. After running 1:44 off the clock and forcing Notre Dame to use all of their timeouts, the Hokies took over on defense at the Notre Dame 10-yard-line.

“They know that we’ve got to keep the ball in bounds so the clock will continue to run,” Foster said. “I didn’t want to give them anything cheap and that was really about it. We made them have to drive it. They had the wind in their face, we wanted to keep them at a distance to where it was going to stress their kicker. The kids knew that.”

Kizer nickeled and dimed his way down the field, but could never complete anything over the top. Time slowly ticked off and Notre Dame ran out of time near midfield, sealing a Virginia Tech win.

The team celebrated on the field and shared it with the contingent of Hokies fans who made the trip. While all that was going on, Phillips breathed a sigh of relief.

“Thank God,” Phillips said. “Back to the play, that the play that I should’ve made. That stuck with me the whole game.”

The Hokies’ win gives them some much-needed momentum heading into the final regular season game vs. Virginia. A win would clinch the ACC Coastal Division title for Virginia Tech and secure the Hokies a place in the ACC Championship Game.

“It means the world,” Phillips said. “The last few years have not been what’s expected by the bar that’s been set here at Virginia Tech, but Coach Fuente and his staff have done a great job just getting trust back in our abilities, in ourselves and just confidence in our abilities and trying to make things as hard as possible in practice and training, so that the games kind of are easy for us.”

“I don’t know what it means, other than that we get the chance to play again if we win,” Fuente said. “We get an extra game together, our group, our seniors, the kids who have given so much to our program. We get another opportunity to play.”

After the first couple of drives, Travon McMillian didn’t see the field much, if at all. Instead, the Hokies primarily used Marshawn Williams and Steven Peoples at running back. Peoples had 11 carries for 32 yards and a touchdown, while Williams had eight carries for 28 yards. McMillian carried the ball just once for two yards.

Sam Rogers was excited to see Peoples have an opportunity to contribute.

“It’s awesome. I love Steven,” Rogers said. “He’s a really hard worker, a very team-first guy and its awesome when he can get in there and do some things with the ball.”

Despite the windy conditions, Joey Slye kicked pretty well. He had fewer touchbacks, but made both field goal attempts and all four of his extra point attempts. Evans was also pretty accurate throwing the ball in the windy, icy air, completing 22 of his 29 attempts.

“I felt like the wind was a much bigger factor in the kicking game than it was throwing the ball,” Fuente said. “I thought both quarterbacks threw the ball into and with the wind pretty well. I think there were a couple plays where it did affect the ball flight a little bit. Sometimes when you’re going with it, it’s harder to control the ball, but Jerod throws a very tight spiral. We threw a lot of balls underneath and he was pretty accurate.”