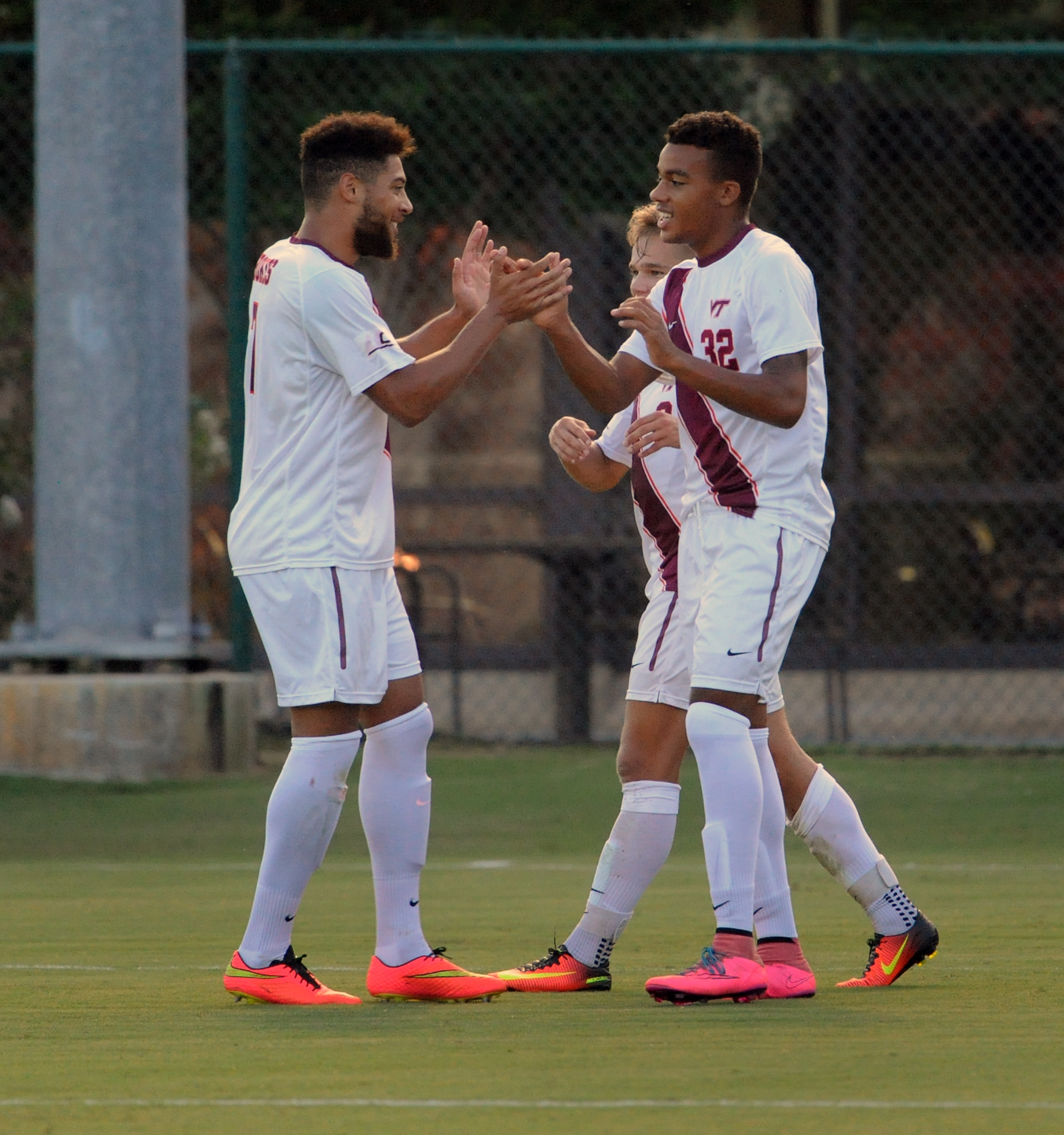 Virginia Tech men’s soccer has just finished their best regular season since 2007. This year the Hokies ended the regular season with a record of 10-4-4, including six straight wins to begin the year.

All of that would be for naught if Virginia Tech did not see their name called for the NCAA Tournament. After getting eliminated by Boston College by way of penalty kicks in the first round of the ACC tournament, the Hokies were firmly on the bubble. As a result, Virginia Tech had to wait an excruciating 12 days before the selection committee decided who would take part in the NCAA Tournament.

“It’s a nightmare,” said coach Mike Brizendine. “With the ACC tournament, we stopped playing a couple weeks ago so you’re just watching every game, every score, and how it could affect your RPI. During that time our RPI fluctuated six points and that’s a huge difference. That’s the difference between getting in and getting out. Just managing that and not getting too wild about it. Just knowing that at the end we played a good schedule, so that will put itself where it needs to be. When you’re on the bubble, you depend on teams that should win to win. You start rooting for a lot of teams real quick.”

Despite the wait, it ultimately ended in jubilation when Virginia Tech’s name was announced for the NCAA Tournament in a matchup with East Tennessee State on November 17 at 6 pm. All of the players crowded together and jumped around in a huddle, celebrating the Hokies’ first postseason appearance in nine years.

“It was great,” Brizendine said. “Nothing really can describe it. I knew that we were a bubble team, so it’s tough when you’re on the bubble and you think you should be in and you’re trying to figure out how you couldn’t be. Once our name showed up, I was ecstatic. I thought we deserved to be there, and it was awesome that the committee thought the same thing.”

“When the day finally came that we were going to find out, everyone was nervous,” said redshirt senior and team captain Alessandro Mion. “Even before the show, just the whole day. Just watching the show and waiting and waiting and seeing teams that we’ve beaten make it. Starting to think, ‘I don’t know if it’s us, I don’t know if we’re going to make it.’ Finally seeing our name up there, I think everyone was not surprised, but just so excited that I don’t think anyone even saw the rest of the show. Everyone was just so emotional and so excited to finally see our name up there. Everything we had worked for over the season has actually been a purpose to it and you could see it finally being worth it.”

So how exactly did Virginia Tech see such a turnaround this year? After the previous three seasons saw the Hokies finish with a record of 4-8-5 in 2013, 7-8-2 in 2014, and 5-9-3 in 2015, there was a desperate need to right the wrongs of the previous years. Brizendine noted that he felt the team’s chemistry and togetherness was on a different level than in the past.

“The chemistry of the guys,” said Brizendine. “My best players are also my hardest workers and it has lifted the level of all of our guys. The level all across the board is very good. The guys push each other, and just the level has improved. From the player quality to again the effort that they’re putting in. Having our best players be the way they are and also the leadership. Alessandro [Mion], Andre [Thomas], Ben [Lundgaard] have all done a great job in leading this team. That’s something we felt we lacked in the past. Those guys wanted to win. At the beginning of the season they said ‘This is our year, let’s do this.’ And they’ve done it.”

For Mion especially, the past four years have been a roller coaster of emotions. The 6-1, 180-lb defender has had to deal with disappointment, injuries, and frustration. Now in his senior year, Mion has seen all of those negatives flipped 180 degrees into a path filled with positives.

“First, I have to thank God because this has been a very tough four years for me,” Mion explained. “It’s been up and down every year. First year it was like I said, up and down, and last year I tore my ACL. At some points I thought maybe this was the end for me. Honestly, God just kept telling me, ‘It’s okay, just keep fighting.’ It was a long nine months for me personally to get back into action just playing again. Also, just the past few years it’s been tough because we’ve been bad. I’m not going to really sugarcoat it, we’ve been bad.

“This year we went to Costa Rica in the summer and that brought the team together. We just started feeling some sort of optimism towards this coming season. We got some new players, it’s been upbeat, and we’ve been together. This team has just been different. We’ve been playing for a good cause too with Gino’s [Rossi] sister getting cancer. Us all shaving our heads together, that’s something that really brought the team together. Everything is positive with this team. You can tell everyone really cares about each other. There’s a love for each other and a love for the game which has helped us all season.”

As aforementioned, Virginia Tech will face a tough-minded East Tennessee State team in the first round of the NCAA Tournament. The Bucs finished the year with a 12-4-3 record, including a 1-0 overtime victory over North Carolina who was ranked No.1 at the time. In fact, Virginia Tech and ETSU faced off in an exhibition match in August, a matchup which saw a 3-1 result in favor of the Hokies.

“The good news is that we’ve played them so much that we know their personnel very well, and they know our personnel very well,” Brizendine said. “They have one of the more dynamic attacking guys up front. Very solid in the midfield and good goalkeeping. If you get to the NCAA Tournament, there’s a reason why you’re here. It’ll be a good matchup. I don’t think there will be too many surprises. It’ll come down, like all games, to individual plays at key moments.”

One clear edge that Virginia Tech has heading into the match will be the home field advantage, as the Hokies get to play in front of their faithful at Thompson Field.

“Our guys love being here, they love being in front of our crowd and in our routines here,” said Brizendine. “It’s very exciting. I think it’s a testament to what they’ve done this season. When you can get a first round home game, it shows the quality that you bring to the table. I’m glad for that and I think it will be a huge advantage for us.”

One look at the Hokies’ four losses throughout the year shows a common theme: a top 10 ranked opponent. With losses to Notre Dame (No.1), Clemson (No.7), Syracuse (No.10) and North Carolina (No.3), Virginia Tech hasn’t shown the ability to get over the hump and beat the upper echelon of opponents. If the Hokies should advance in the tournament, those are the types of teams that will stand in their way.

“I thought we were close,” Brizendine said. “Even in the Notre Dame game, that score was 4-1, but if you call that coach he’ll tell you it was a close game. When it was 2-0 we missed a couple of key opportunities when we were pressing on them. I think that we’re there. I think it’s one of the reasons we’re in the tournament. People will know that we can beat anybody on any given day. There’s a couple matchups that aren’t great for us. For the road that I saw for us to get to the Final Four, there’s no team in there that really scares me or I think is an awful matchup for us.”

The Hokies have gotten to the point where they’ve been striving all year long. Now it’s all about simple execution. However, Mion and the other seniors have a little extra motivation knowing that each game could be the last time they step onto the pitch in a Virginia Tech jersey.

“Personally, I’m going to give it everything I can give,” Mion said. “I’ve been dying to finally play an NCAA game. Since high school when I was looking at colleges, I was looking at schools I could get there with and then this opportunity came. Thinking it would be nice to get there with a school that hasn’t been there in awhile. It was a rough first three years, but at the end of day, this year has made all of those three years worth it because it makes it even sweeter to know how much we’ve worked to get here. People like me, and Andre Thomas, and Brian Howard who have been here since the beginning teams. I’d say senior year, just ending it on a high note, giving it everything we’ve got to win games and take it a game at a time. Why not us? Why can’t we do it?”

That’s exactly the mindset the Hokies will be carrying into the tournament, ‘Why not us?’ The Hokies have already defied expectations after being picked in the preseason to finish last in the Coastal Division. Why can’t they continue to defy expectations and string together a postseason run? Much remains to be seen, but one thing is for sure, Brizendine and company will be setting a new direction for the Virginia Tech men’s soccer program when they take the pitch Thursday night.