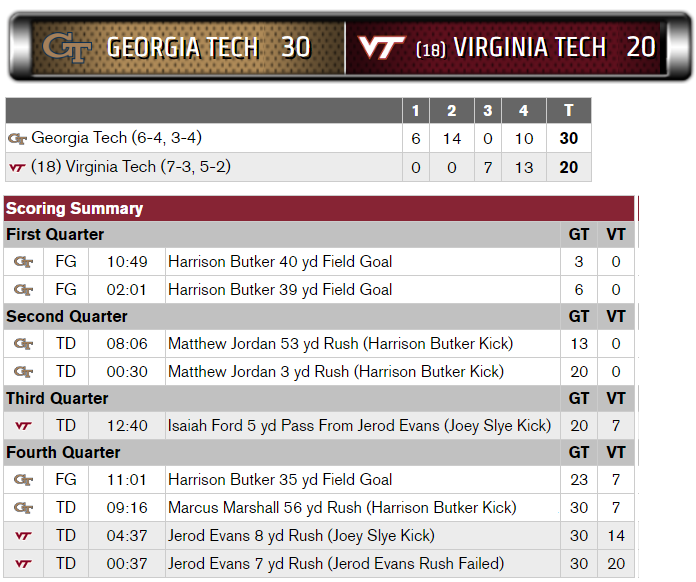 Virginia Tech had a chance to clinch the ACC Coastal Division on Saturday vs. Georgia Tech. Instead, the Hokies turned the ball over four times and lost to Georgia Tech 30-20 in a game that wasn’t as close as the score indicates.

“You think back on the game, we turned the ball over obviously, right from the start,” Fuente said. “Really never got anything going. I thought our kids played admirably.”

The mistakes for Virginia Tech started on the opening kickoff. Der’Woun Greene, who returned kicks in place of the injured Greg Stroman, fumbled on the return and it led to a Georgia Tech field goal. Wright Bynum later couldn’t handle a snap on a 38-yard field goal attempt and it was blocked. Jerod Evans threw two interceptions and a Bucky Hodges fumble in the fourth quarter killed any chance the Hokies had at tying the game.

“I mean all coaches say these things, but they’re true. The single, biggest determining factor in winning or losing ballgames is turnover margin,” Fuente said. “There’s no other statistic other than the score that predicts the outcome of a game.”

Georgia Tech’s Matthew Jordan started at quarterback for the injured Justin Thomas and ran all over the Hokies. Jordan finished with 121 rushing yards and two touchdowns. As a team, the Yellow Jackets ran for 309 yards on 58 attempts. Georgia Tech held the ball for 35 minutes and 55 seconds and controlled the flow of the entire game.

“Paul Johnson did a great job tonight,” said Defensive Coordinator Bud Foster. “He was kind of a step ahead of me on a couple things. We were always trying to get our front moving. He did a nice job countering that.”

Georgia Tech owned the first half. Harrison Butker kicked two field goals in the first quarter as the Yellow Jackets churned the game clock. Georgia Tech continued to pound away on the ground and broke through in the second quarter on a 53-yard touchdown run by Jordan to extend the lead to 13-0 with roughly eight minutes left in the half.

Virginia Tech’s next two drives went nowhere and right before the half, Georgia Tech capitalized on good field position to add to the lead. Jordan’s second rushing touchdown of the day gave the Yellow Jackets a 20-0 lead heading into halftime. It was the worst first half deficit for the Hokies since their 2014 loss to Miami at home.

The Hokies had just 121 total yards in the first half and were just 2-6 on third down.

“It wasn’t what we’d like it to be, that’s for sure,” Fuente said. “It’s always easy for a coach to say, ‘We weren’t, we never got in a flow or a rhythm,’ and all that kind of stuff, which is true, but there were reasons for that. Our execution level just hasn’t been, or certainly wasn’t today, what it needed to be. When we did get things going, we either turned the ball over or couldn’t convert on a third down to keep the drive going, which is disappointing.”

Virginia Tech seemed to come out of the half with some fire. They took advantage of a bad snap by Georgia Tech and immediate clicked on offense. Evans threw a 5-yard touchdown pass to Isaiah Ford to cut Georgia Tech’s lead to 20-7 with 12:40 left in the third quarter.

The touchdown was Ford’s 185th career reception, breaking the school record previously held by Jarrett Boykin. Ford finished with eight catches for 85 yards and the touchdown.

Unfortunately for Virginia Tech, that would be the last time the offense moved the ball before the game was out of reach. Evans’ second interception came on the next drive, and the Hokies lost all momentum. Georgia Tech added another field goal with 11:01 left to play and capped it all off with a 56-yard touchdown run by Marcus Marshall to go up 30-7 with 9:16 left in the game.

“We needed to not allow the big plays. We gave up two big plays and that cost us the football game when it’s all said and done,” Foster said.

With the loss, Virginia Tech drops to 7-3 on the season. Saturday was the second game this season that Virginia Tech came out flat vs. an out-matched ACC team. The Hokies also made plenty of mistakes in their 31-17 loss to Syracuse in October, and both that loss and the Georgia Tech loss have made the Coastal Division closer than it should be.

Despite the poor start and stagnant offense, Evans didn’t think the team’s energy was a problem.

“I thought we were ready to play,” Fuente said. “The guys had a good week of practice, at times we looked good out there, but we just… I don’t sense anything but professionalism and hunger from these guys to do the right thing.”

Evans said that spreading the football around more should help the offense get things going.

“I say get everybody more involved,” Evans said. “Not just a couple people. I think once that happens, you’ll see more execution.”

Virginia Tech will have to play Notre Dame in a non-conference game next weekend, but can clinch the Coastal Division the following week vs. Virginia. The team’s win over North Carolina gives Tech an important tiebreaker over the Tar Heels, who also have two ACC losses. 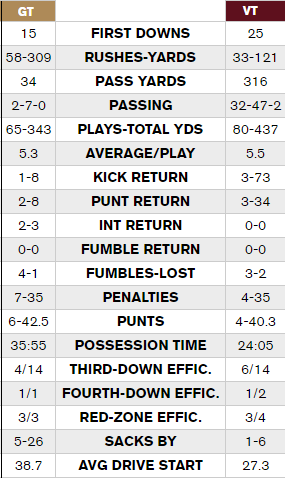 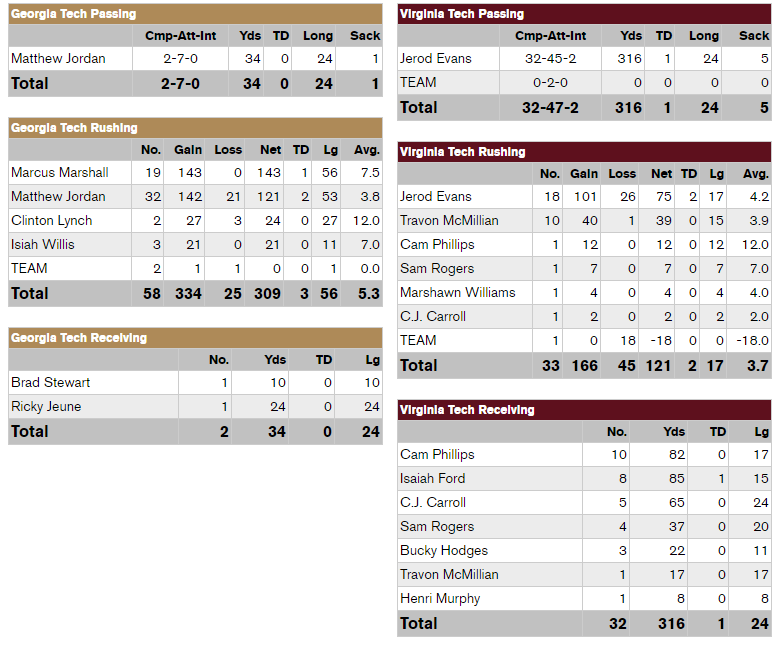