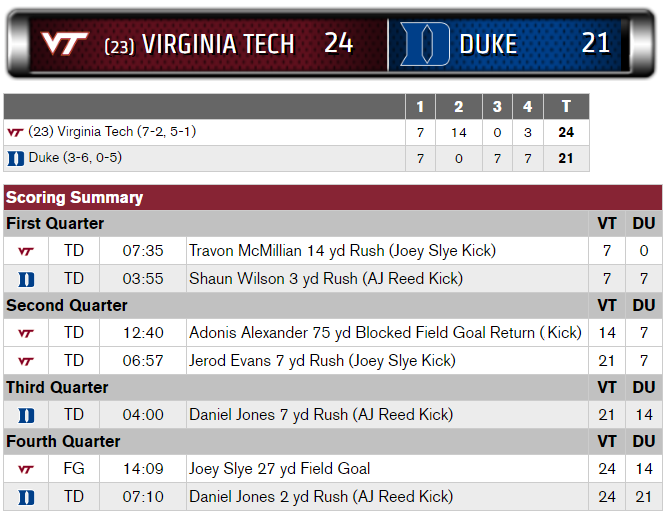 DURHAM, NC. — Virginia Tech didn’t play all that well on Saturday vs. Duke, but when you win, that doesn’t really matter.

The No. 19 Hokies battled the entire game, and thanks to some timely stops and a blocked field goal returned for a touchdown, Virginia Tech escaped with a 24-21 victory.

“I’m proud of our kids and the way they finished the ballgame,” said Virginia Tech Head Coach Justin Fuente. “We knew it was going to be tough coming in here. Duke is much better than their record. They are very, very well coached, they play hard.”

“Well certainly, it was far from a perfect game,” Fuente said. “Their quarterback kept the ball on the zone read a few times, they ran some power read and gave us some problems, certainly. We certainly, I’m sure Bud would say the same thing, we expect our guys to play a bit better and to defend the rush a little bit better.”

Tech missed several key opportunities, but the Hokies were able to close it out when it mattered. The offense stalled on several possessions, but kept the ball moving on the final drive. The defense allowed plenty of yards, but came up with a stop when needed.

“The elite teams and the good teams, where we want to be, those teams find a way to win, no matter when it’s ugly or how ugly it looks,” said Isaiah Ford. “When adversity hits, they find a way to win and that’s what we did tonight.”

Virginia Tech opened the scoring on their second possession. Starting from close to midfield, the Hokies marched into Duke territory and on the seventh play of the drive, Travon McMillian found a lane up the middle for a 14-yard score, giving Tech a 7-0 lead with 7:35 left in the first quarter.

True to the nature of the game, Duke responded on their next possession. Duke’s Jones got into a rhythm in the screen game, while Shaun Wilson and Joseph Ajeigbe punched holes in the Hokies’ run defense. Wilson capped off the drive with a touchdown run, tying the game at seven.

The Hokies’ offense got rolling on their next possession, but the redzone issues from the Pittsburgh game reared their ugly head once again. Virginia Tech stalled again in the redzone and thanks to a missed field goal from Joey Slye, the Hokies came up empty. Slye’s miss from 34 yards out broke a string of 24 consecutive makes from inside 40 yards.

Duke capitalized and went down the field deep into Tech territory. However, the Hokie defense forced a field goal attempt from the 12-yard-line. Instead of Duke building momentum, Greg Stroman blocked the 30-yard field goal attempt, and Adonis Alexander scooped it and took it to the house for a 75-yard return, giving Virginia Tech a 14-7 lead early in the second quarter.

“We try and scheme it up every week, so it wasn’t anything in particular,” Fuente said. “It’s very difficult to block one, you can come really close a lot and not get one, and we had been close before in other games. Good job by the guys inside getting push, shortening the edge and obviously a great job by Greg.”

Tech’s defense pounced on Duke’s next drive, forcing a quick three-and-out. Virginia Tech took over at their own 34-yard-line and thanks to a push from Wyatt Teller, Evans capped off the 12-play drive with a 7-yard touchdown run, giving Tech a 21-7 lead with 6:57 remaining in the second quarter.

Duke was stopped on their next possession, but the drive didn’t end well for the Hokies. While fielding the punt, Stroman was tackled by the legs and landed awkwardly on his ankle. Officially, it was an ankle sprain for Stroman, and he did not return. Fuente didn’t provide any insight on Stroman’s injury after the game.

Virginia Tech took the 21-7 lead into halftime, but couldn’t finish off Duke. The Blue Devils hung around and with 3:55 left in the third quarter, Jones ran it in from seven yards out to cut the Hokies’ lead to 21-14.

The Hokies stretched their lead to 10 on the next possession with a 27-yard field goal, but Duke didn’t quit. They kept hanging around and with 7:06 left in the fourth quarter, Jones ran for his third rushing touchdown of the game, cutting Virginia Tech’s lead to 24-21.

Needing to turn the tide, Tech’s offense went three-and-out on the ensuing possession, giving the Blue Devils the ball with 5:55 left to play.

The defense was called on to make a play, and they did. Terrell Edmunds came from the rover position to force a fumble by Wilson, and it was recovered by Mook Reynolds, giving the Hokies’ great field position with a chance to ice the game.

But Edmunds was called for targeting after a booth review, giving Duke possession of the ball at midfield. Edmunds was ejected from the game, and will be ineligible for the first half in Virginia Tech’s game next week vs. Georgia Tech.

After the game, Fuente was careful with his words about the penalty, though it was clear he was disappointed.

“On the field, it happened so fast. I don’t know,” Fuente said. “Terrell was just a blur coming in there to make the tackle. I saw a couple of the replays… I understand the rule. I understand the intent of the rule and because of the rule, there are going to be some times when good football plays are punished in the name of safety, and I understand that, we understand that. Those are the rules and we play by them. I certainly don’t think it was deliberate or malicious by Terrell, who’s a good football player. The running back was low, and he was trying to go low to tackle him. So, those things sometimes happen, and I get it.”

“It’s a tough call, it could’ve gone either way,” said Hokies defensive end Ken Ekanem. “I talked to the refs about it, they were on the fence about it too, so. It’s a tough call, I’m not a ref, so… I don’t know.”

Duke had all the momentum, but Virginia Tech rallied. Terrell’s brother, Tremaine Edmunds, sacked Duke’s Jones on the next play for a loss of five yards and the Hokies forced a punt. It seemed as if Edmunds’ ejection lit a fire under Virginia Tech.

“I was pleased with the way the team responded after that event,” Fuente said. “That was an opportunity to let the air out of your balloon so to speak, and it certainly did not happen. The defense responded and in turn, the offense got the ball and ran the clock out to finish the ballgame. I think we took what could’ve been a difficult situation and the kids did a great job responding in that spot.”

Virginia Tech took possession with 4:06 remaining and milked the clock. McMillian kicked off the drive with a 21-yard run, and the Hokies picked up four first downs to finish off the pesky Blue Devils.

“It hasn’t always been pretty, but we’re finding ways to get it done, and that’s one thing we haven’t done the last couple years,” Tech defensive coordinator Bud Foster said. “I’m really proud of our seniors and their leadership and how our kids are fighting.”

Tech’s win makes them 3-1 on the road vs. ACC teams this season. Since the deflating loss to Syracuse in October, the Hokies have rattled off three straight wins and still find themselves in the driver’s seat to win the ACC Coastal Division.

“I think we learned from our mistakes, as far as coming out flat and things like that,” Ford said. “Then, we got to give credit to Hokie Nation. At times, it sounded like Lane Stadium in there a little bit, and it was really impressive.” 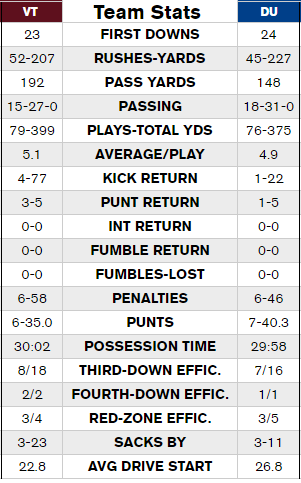 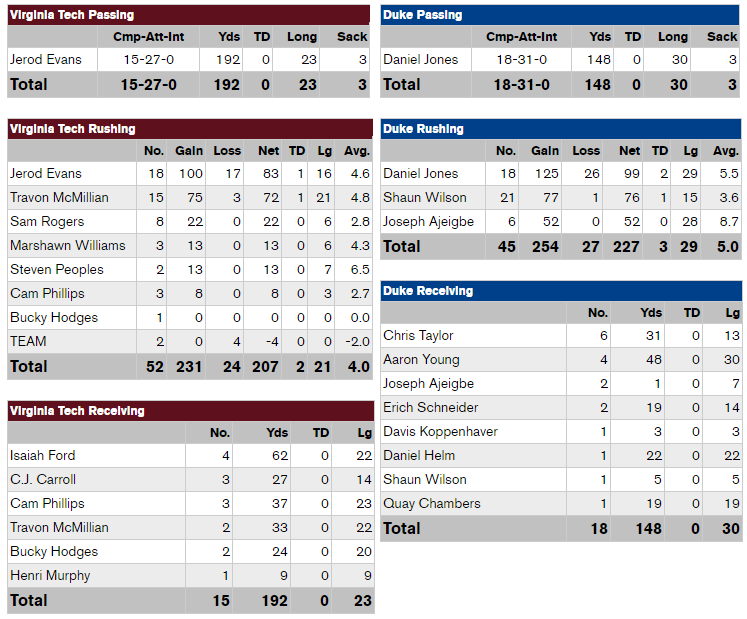