For Mickey Hayes, “Ut Prosim” is more than just a slogan — it’s a way of life.

Hayes, a graduate of the Class of 1964, has spent his entire life giving back to Virginia Tech. He serves as a member of the executive committee on the Board of Directors of the Virginia Tech Athletic Fund, and is a member of the President’s Circle, a group of donors who have given more than $1 million back to the university.

An expert in real estate, Hayes doesn’t have much experience with fundraising, but that’s exactly what he’s doing now. Hayes is in charge of the Hokie Bike raffle, which is raising money for the Virginia Tech Athletic Fund, as well as the Virginia Tech chapter of Delta Kappa Epsilon (DKE).

The prize is a custom-built Virginia Tech motorcycle, as well as a custom trailer to go with it.

The project started several months ago, when Hayes was contacted by friend and former fraternity brother Billy Vinyard about the bike. Mickey Fitzgerald, who played at Virginia Tech for four seasons and was inducted into the Virginia Tech Hall of Fame in 2002, was the original owner of the bike, but no longer could ride it. Vinyard put Fitzgerald in touch with Hayes, knowing he could make things happen.

When Hayes first met Fitzgerald a little over a year ago, the two hit it off.

“I liked him immediately, and he liked me immediately,” Hayes said. “It had nothing to do with our names being Mickey.”

Hayes said that Fitzgerald, who himself has given hundreds of thousands of dollars to the Athletic Fund, was eager to turn the bike into something that could benefit others. At the suggestion of Vinyard, Fitzgerald turned the bike over to Hayes.

“I’ll just give it to you,” Fitzgerald told Hayes. “Somebody needs to love that thing.”

Hayes figured that instead of just selling the bike, the bike could be raffled off. With Fitzgerald’s athletic background and Hayes’ familiarity with the athletic department, Hayes decided the bike’s proceeds should go to the Athletic Fund, primarily in support of paying scholarships for student-athletes.

After taking control of the bike, Hayes immediately started figuring out the logistics of the raffle. Hoping to increase his reach and credibility with fans, Hayes looked to the athletic department for help. Hayes hoped to use the Virginia Tech Hokie Club brand, which would carry a lot of weight.

“If we could use the Virginia Tech brand and give away half of the money to them, and they don’t have to do a thing, just let us use their brand, and they trust me, they know me, that would really be the way for this thing to go forward,” Hayes said.

Hayes set up a meeting with Director of Athletics Whit Babcock, as well as Deputy Athletics Director Desiree Reed-Francois, in order to secure permission to use the Virginia Tech brand.

“I got all my stuff together, I went in there full bore with a presentation,” Hayes said. “I went to Whit and Desiree with this presentation, and they just ‘ooh-ed’ and ‘ahh-ed’ the whole thing.”

After receiving permission from Babcock and the athletic department, Hayes turned to DKE for manpower. Hayes, a former DKE brother, told the fraternity that they would receive 45 percent of the bike proceeds, with 55 percent going to the Athletic Fund. In return, the fraternity brothers would help sell raffle tickets for the bike and help show off the bike at events around Blacksburg.

The DKE brothers were enthusiastic about helping with the project. DKE has been recognized by the national chapter for their philanthropic efforts, particularly their work with the Movember Foundation, which focuses on men’s health. DKE’s plans are to use their part of the proceeds in order to renovate their fraternity house, as well as help with philanthropy efforts.

“They can show that to people, that they did good things aside from drinking beer and all the other stuff that we all did,” Hayes said.

Since then, Hayes has managed the entire raffle on his own. He’s overseen all of the raffle’s finances and organized the showing of the bike at football games. He’s spent roughly $4,000 of his own money on promotions of the raffle, as well as transportation and storage for the bike and trailer. Even though Hayes has dumped his own money into the project, he won’t reimburse himself from the project’s proceeds.

“I knew I was going to spend money on it, and I’m happy to,” Hayes said.

So far, Hayes says the raffle has raised over $20,000 and he hopes that as the drawing gets closer, that number will rise.

The winner of the drawing will be announced at halftime of Virginia Tech’s game vs. Virginia. Virginia Tech President Dr. Tim Sands will pick the winner on the field. Hayes hopes that Fitzgerald, as well as Ben Brisley, president of the DKE chapter at Virginia Tech, will be on hand for the drawing.

If people would like to buy raffle tickets online, tickets are available here. The winner does not need to be present at the Virginia game when the winner is announced, and the winner has 30 days to claim their prize. 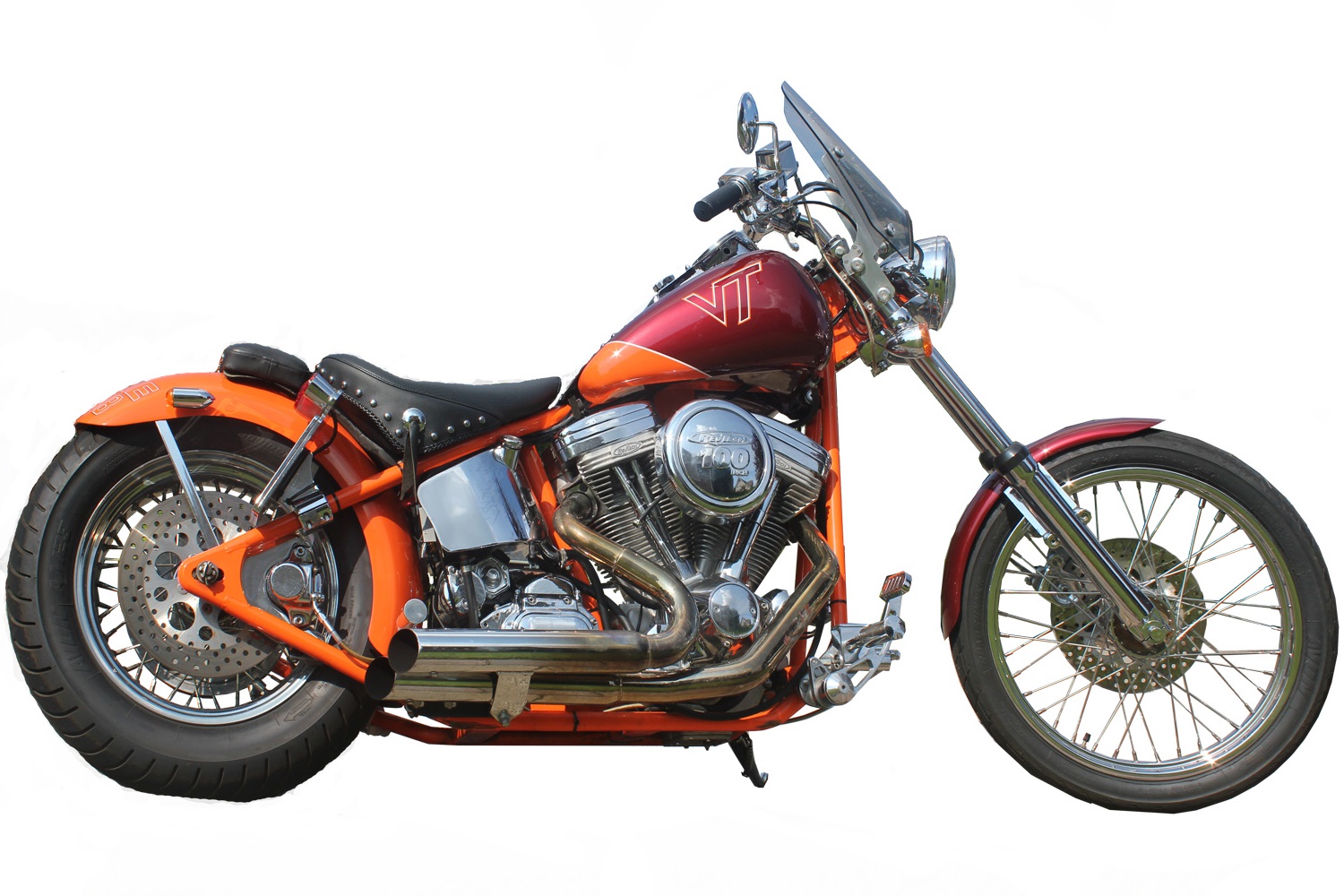 When it’s all said and done, Hayes will have spent countless hours organizing and executing this raffle drawing. He’s out a lot of money, a lot of time, and he isn’t really getting much out of this.

So why go through all of it?

When I asked Hayes this question, he pointed at Thank You cards he had received from the Virginia Tech football coaching staff for having them over for dinner after Justin Fuente was hired. He pointed straight at the Virginia Tech logo on the cards and said, ““I love… I love Virginia Tech. I love everything about Virginia Tech and all the things it did for me, all it stands for.”

“I’m retired, I’m financially comfortable, and I’ve still got lots of life to live. I’ve got a young wife that keeps me energized. I travel a lot, so I’ve got energy, and I love Virginia Tech. A lot of people cried when we had our disaster. I cried for six months, I really did. Every time that I thought about it, I’d cry. Virginia Tech is really in a fine, fine place right now. There are initiatives, educational, academic initiatives that are going to change, in a very positive way I think, everything that happens here. I’m fretting about, not mortality, but I know that I’m not going to live as long as I’d like to, in order to get to see the things I know are going to happen here in the next 15 or 20 years. I’m just not going to live long enough to see them all. The things that are going to happen here in the next 15 or 20 years are going to be remarkable. That’s why, and I’m proud of Virginia Tech.”

— BUY YOUR TICKETS FOR THE HOKIE BIKE RAFFLE BY CLICKING HERE —