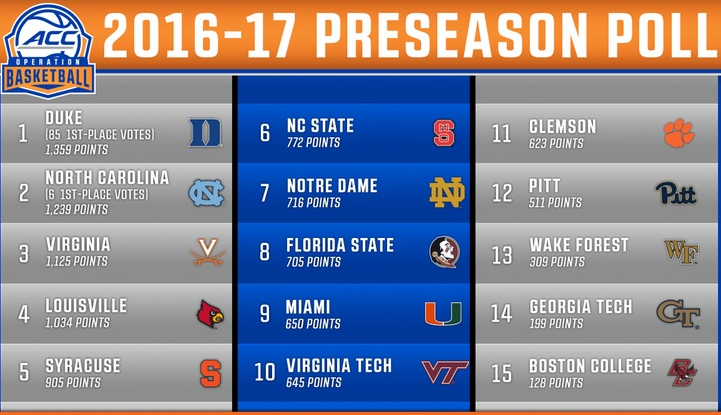 The ACC released its preseason men’s basketball media predictions for 2016-17, and the media picked Virginia Tech to finish 10th in the 15-team league. The voting was performed by ACC members as part of the league’s annual Operation Basketball.

Last year, the Hokies were picked 14th in the conference, but they surprised everyone by finishing tied for 7th in the league with Clemson at 10-8 (20-15 overall). The Hokies won their last five conference games of the regular season, including a victory over #7 Miami, then defeated Florida State at the ACC Tournament before falling to Miami.

The Hokies return their top four scorers from a year ago (Zach LeDay, Seth Allen, Justin Bibbs and Chris Clarke), and they add redshirts Ahmed Hill (8.7 PPG in 2014-15) and Ty Outlaw (junior college transfer who sat out last year due to a medical condition). Last year’s impact freshmen, Justin Robinson and Kerry Blackshear are back (more on Blackshear below), and true freshmen Khadim Sy and Tyrie Jackson also join the team. The only losses from last season are Shane Henry (1.8 PPG), who finished his eligibility, plus fifth-leading scorer Jalen Hudson (8.4 PPG) and Satchel Pierce (1.6 PPG), who transferred to Florida and Penn State respectively.

There is some bad news for the Hokies. It was previously reported by TSL’s Ricky LaBlue that forward Kerry Blackshear will miss the opening of practice and perhaps the season; now Mark Berman of The Roanoke Times reports that Tech head coach Buzz Williams said at Operation Basketball that leading returning scorer and rebounder Zach LeDay is also hurt, although Williams provided no detail.

The Hokies open their season Friday, November 11th at home against Maine, at 9 PM. For the full 2016-17 Virginia Tech basketball schedule, click here.