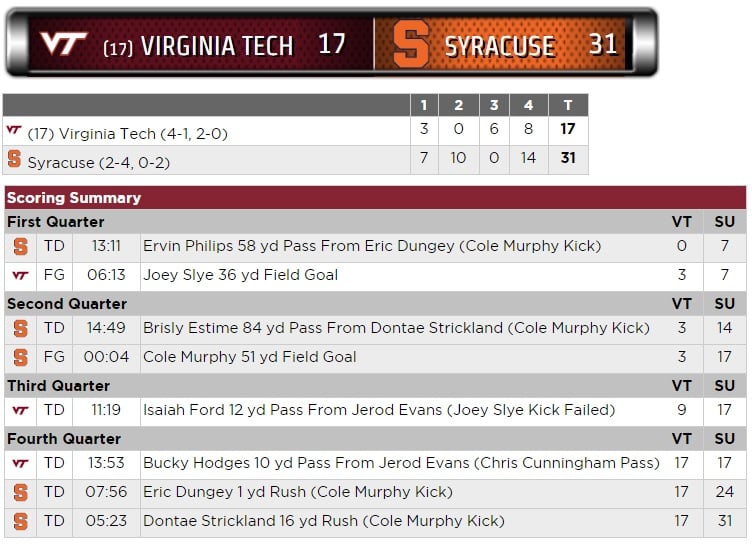 Virginia Tech quarterback Jerod Evans wanted his Hokies to be in the conversation with the ACC’s elite schools after last Saturday’s win over North Carolina. But after an uninspiring, disappointing 31-17 defeat to Syracuse on Saturday, those conversations will cease for the time being.

Instead, Virginia Tech remains a puzzle that doesn’t make sense.

The Orange offense, who’s given just about everyone fits this season, converted 10 of their 21 attempts on third down and four of their five attempts on fourth down and gassed the Hokies defense into submission. Syracuse won the time of possession battle by almost seven minutes, 33:25 to 26:35.

Syracuse quarterback Eric Dungey picked apart the Virginia Tech defense, throwing for 311 yards and one touchdown, while also running for 106 yards and another touchdown. Evans put up respectable numbers, throwing for 307 yards and two touchdowns, but he was responsible for two turnovers.

Syracuse punched Virginia Tech in the mouth early and set the tone. Dungey led a six-play drive to start the game and capped it off with a 58-yard touchdown pass to Ervin Phillips to go up 7-0. The Orange started the second quarter with an 84-yard touchdown pass, this time to Brisly Estime, giving Syracuse a 14-3 lead. Syracuse’s Cole Muprhy padded the lead before the end of the first half with a 51-yard field goal, giving the Orange a 17-3 lead headed into the break. 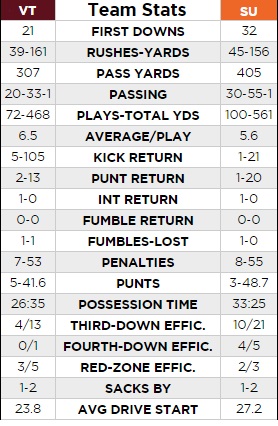 The Virginia Tech offense stalled repeatedly in the first half. The running game struggled to pick up yards and the Hokies faced plenty of third and longs, making it difficult to sustain a drive. The Hokies failed on seven of their nine third down attempts in the first half.

The Hokies bounced back in the third quarter and started to gash Syracuse for chunks of yardage. Travon McMillian ran for 14 yards and 10 yards on separate plays and Evans found Cam Phillips for 21 yards down to the Syracuse 12-yard-line. Evans cashed in with a touchdown pass to Isaiah Ford, but Tech’s extra point was blocked, making it 17-9 with 11:19 left in the third quarter.

Needing a stop, Virginia Tech struggled to get off the field on Syracuse’s next possession. Syracuse drove all the way down to the Virginia Tech 29-yard-line, but Dungey’s biggest mistake of the day killed the drive. Dungey threw into triple coverage in the endzone and Terrell Edmunds came down with the interception, giving the Hokies momentum.

The Hokies took advantage of the turnover to drive down the field. Evans hit Phillips for a 52-yard reception over the middle and just a couple plays later, Virginia Tech faced a third and three from the 7-yard-line. Evans, who’s been very good at valuing the football all season, was intercepted at in the end zone, blowing a scoring chance.

The Tech defense, which had struggled early on, got a stop and on the Hokies next possession, Evans found a chance at redemption. Evans found Bucky Hodges for a 10-yard touchdown and after a two-point conversion, Virginia Tech was tied at 17 with 13:53 left in the fourth.

The momentum didn’t last long. The Orange marched down the field on a 17 play, 75 yard drive and Dungey ran for a touchdown to give Syracuse a 24-17 lead. On that drive, Syracuse converted three third down attempts and one fourth down attempt.

With the defense completely exhausted, the Virginia Tech offense needed to control possession and score. Instead, the Hokies went three and out and were forced to punt. Estime retuned the punt 20 yards and gave Syracuse good field position. Four plays later, Syracuse’s Dontae Strickland iced the game with a 16-yard touchdown run.

The loss puts Virginia Tech at 4-2 on the season and 2-1 in the ACC. Thanks to a win from North Carolina over No. 16 Miami, the Hokies still control their own destiny in the Coastal Division.

Virginia Tech’s schedule doesn’t get any easier after the loss. The Hokies will play Miami on Thursday night in Lane Stadium, only to then travel to Pittsburgh for another Thursday night game. Those two showdowns will certainly help decide the forever-muddled Coastal division. 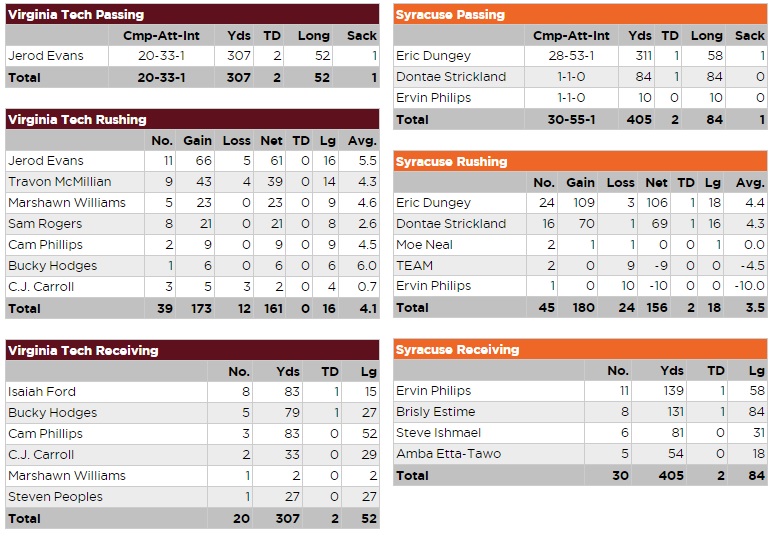