The Hokies are 4-1, and they’re putting up impressive numbers on both sides of the ball.  There’s no better way to illustrate some of those numbers than by running an OXVT infographic article.

The No. 17/19 Hokies play at Syracuse on Saturday.  There’s a good chance that their offensive rankings will go up, while their defensive rankings are likely to drop slightly.  Syracuse is ranked No. 43 in the country in offensive S&P+, but only No. 91 in the defensive S&P+ ratings.  The S&P+ ratings give the Orange less than a 50 percent chance in every single one of their remaining games.  In short, this is not a good football team the Hokies will be playing on Saturday afternoon, especially on defense.

Because he’ll be facing such a porous defense, quarterback Jerod Evans will have a chance to add to his already impressive resume.

Click all infographics for a larger image, if needed.

None of us knew exactly what to expect from Evans this year.  I think it’s safe to say that he has exceeded expectations.  It’s clear that Justin Fuente and Brad Cornselsen know how to put their quarterbacks in a position to succeed.

Those national rankings are impressive.  So is his passing efficiency rating, which ranks first in the ACC by a fairly substantial margin.

The impressive play of Evans has helped the Hokies in all situations.  However, it has especially helped them in the redzone. 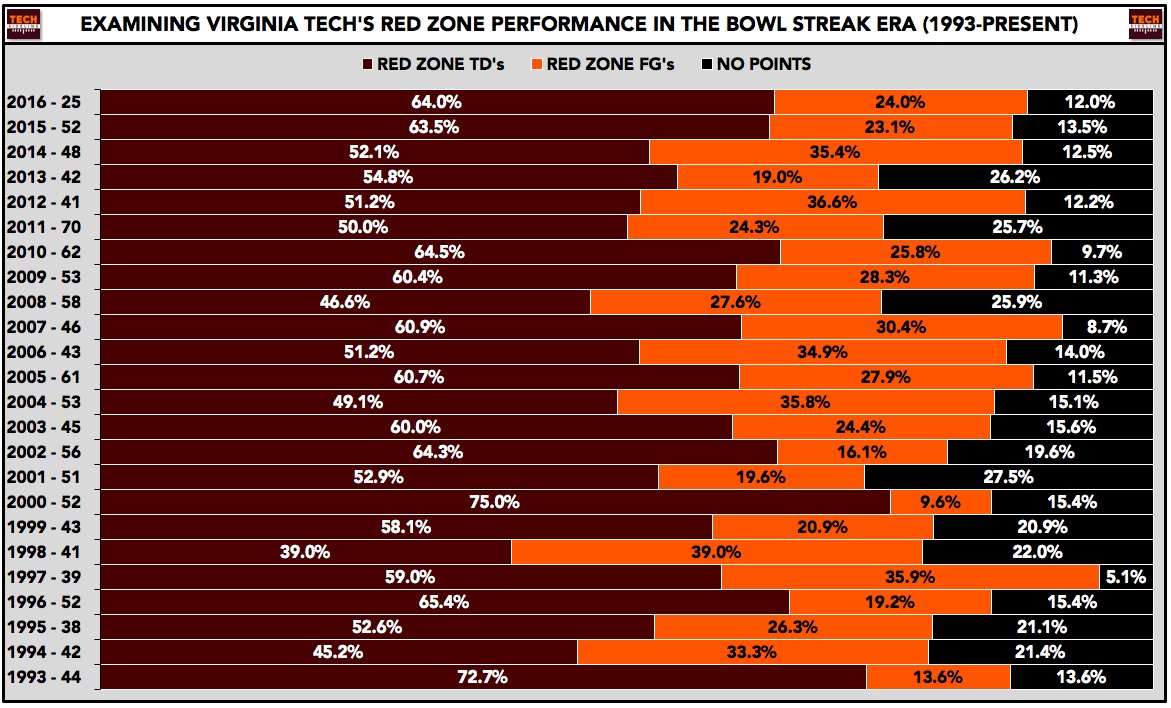 As you can see, Virginia Tech’s touchdown percentage in the redzone is higher than it’s been in any year since 2010 when Tyrod Taylor was a senior.  Obviously Fuente and Cornselsen have a great feel for playcalling in the redzone, but having a running threat like Evans under center helps quite a bit. 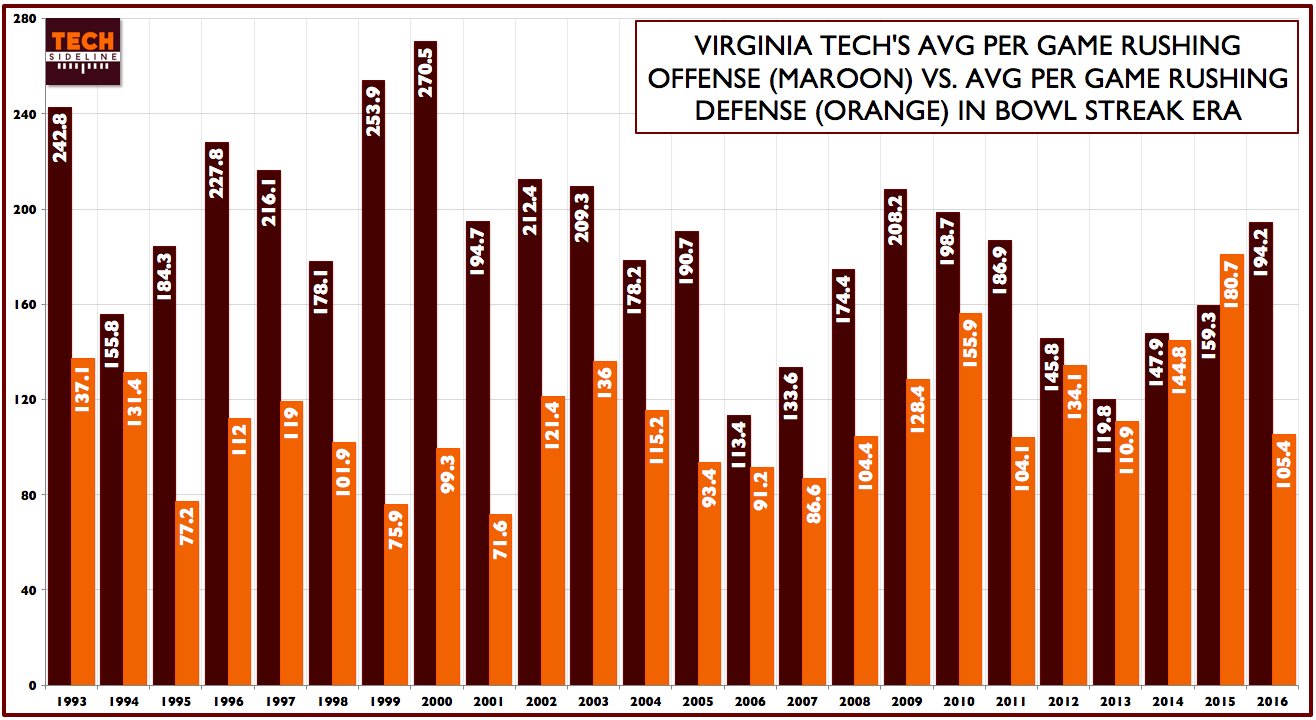 If Tech can keep dominating teams on the ground, they’re going to win a lot of football games.

Through the first five games of the season, the Hokies have dominated their opponents in terms of total yardage.  Tech is third in the ACC in yardage differential.

Keep in mind that Clemson has played six games to Virginia Tech’s five.

The Virginia Tech defense currently ranks third in the nation in total defense after holding North Carolina to just 131 yards on Saturday.  They are behind only Michigan and Florida.  A big reason for their improvement is the lack of big plays that they’ve allowed. 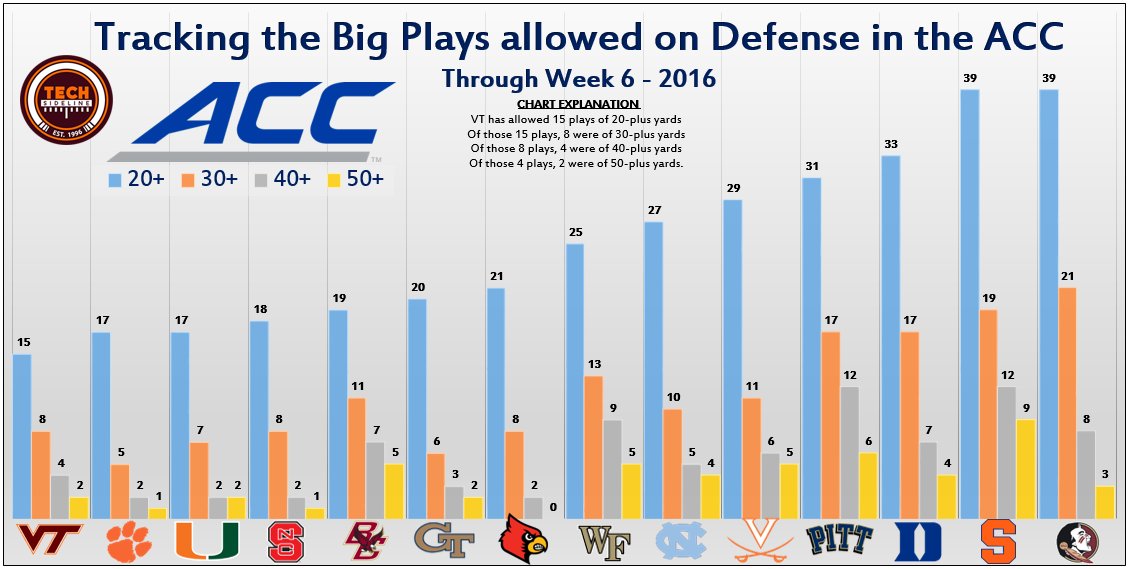 The Hokies are stuffing the run and clearly opposing teams are having trouble getting the ball down the field consistently against Tech’s much-improved secondary.  That’s a recipe for defensive success.

Wondering about the stats of opposing quarterbacks this year?  Opposing quarterbacks are 58-of-142 (40.8 percent) for 661 yards for five touchdowns and seven interceptions.  That’s pretty incredible, and it means the Hokies are No. 1 in the country in pass efficiency defense. 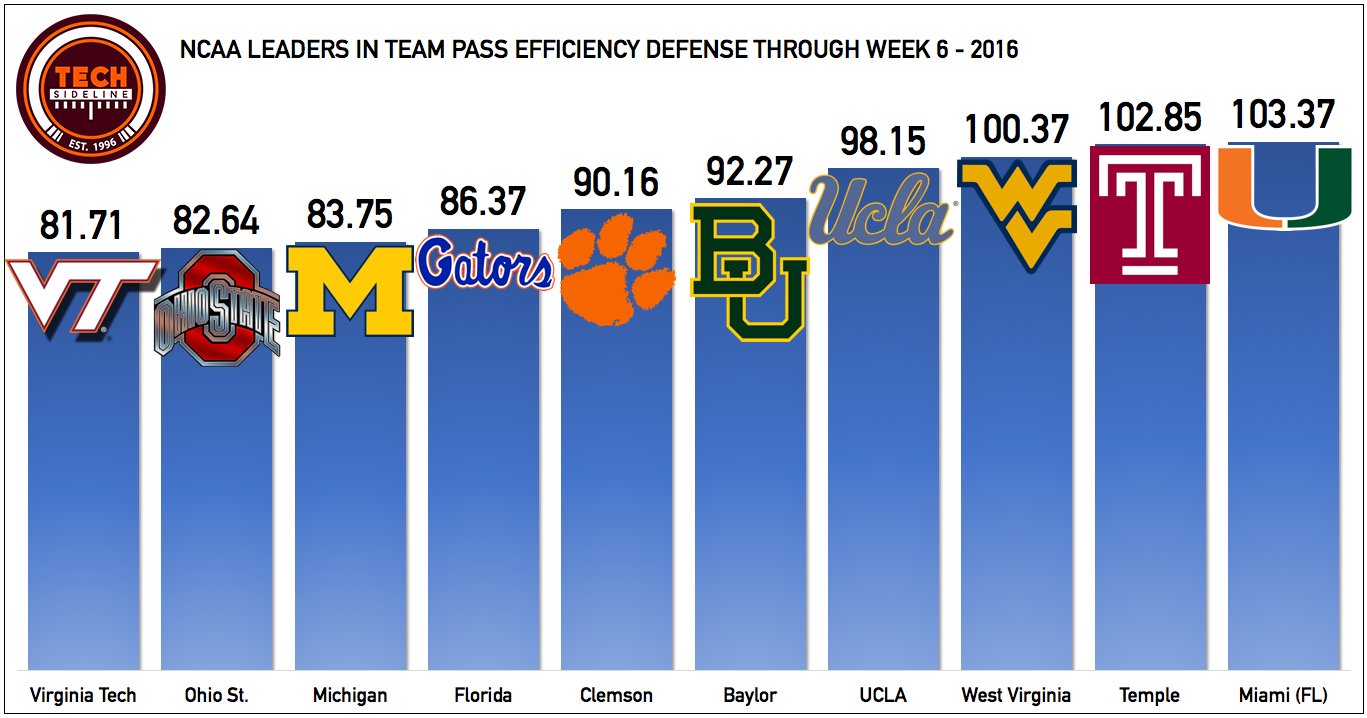 Given those third rates, it becomes a lot easier to see why the Hokies have defeated their last three opponents by a combined score of 137-20.