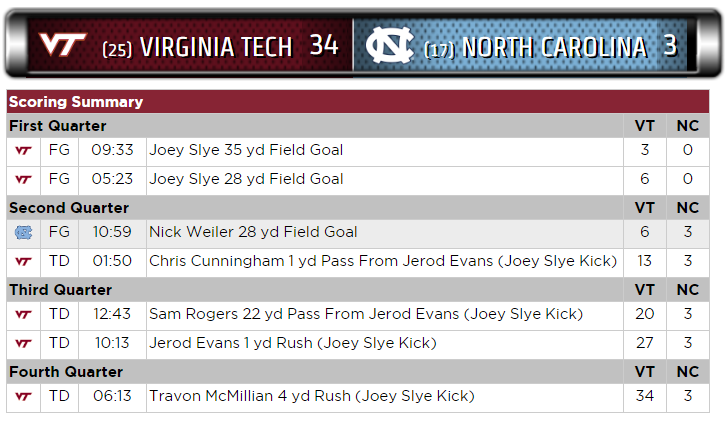 Chapel Hill, NC — Both teams played in a windy, rainy, muddy football game on Saturday, but only one of them weathered the storm.

Virginia Tech’s defense forced four turnovers and held North Carolina to 131 yards as the No. 25 Hokies defeated the No. 17 Tar Heels 34-3.

“Obviously it wasn’t perfect, but it was a great team effort to come in here and beat a talented, very well coached, very tough North Carolina team that we have a tremendous amount of respect for,” said Justin Fuente.

The win bumps Virginia Tech firmly into the conversation to win the Coastal Division, as the Hokies are 4-1 and 2-0 in ACC play. The win on Saturday was a statement to the rest of the conference, putting everyone on notice.

“We’re tired of hearing about everybody else,” said Jerod Evans. “We’re tired of hearing about UNC, Miami, Clemson, Louisville, etc. I mean those are great teams, don’t get me wrong, those are extremely great teams, but at the same time, we feel like we should be mentioned in those categories with those guys. Every week, we have a statement we want to make.”

Hurricane Matthew certainly had an effect on the game. Neither team looked very potent on offense, but Virginia Tech was able to limit mistakes and take advantage of some short fields. Each Virginia Tech scoring drive started in North Carolina territory.

“It was definitely great, especially in this condition,” Evans said. “We have the best defense, I’ve stated that multiple times, the best defensive coordinator and the best defense. Just how I feel about these guys. These guys are some dogs. They get the system, they want to make plays, they’re more experienced from last year.”

North Carolina’s first two turnovers resulted in six points for the Hokies, as Joey Slye tacked in two field goals in the first quarter. Tech’s next scoring drive came late in the second quarter, thanks to a tough catch by Bucky Hodges at the one-yard-line. Evans finished off the drive with a touchdown pass to Chris Cunningham, giving the Hokies’ a 13-3 lead with 1:50 left to go.

The Tar Heels’ Mitch Trubisky fumbled on Carolina’s first possession of the second half, leading to a 22-yard touchdown pass from Evans to Sam Rogers on the next play, giving Tech a 20-3 lead. The scoring didn’t stop, as Virginia Tech added another touchdown, this time a run by Evans, making it 27-3 with 10:13 to go in the third quarter.

By that point it was well out of reach, thanks to a stifling Virginia Tech defense. The Hokies shut down North Carolina early and laid into Trubisky all game along. Trubisky, who came into the game completing 76% of his passes with 13 TDs and no interceptions, completed just 13-33 passes for 58 yards and two interceptions.

“I really felt like coming into the game, he was the key,” Foster said. “He was playing really, really well, Trubisky. We were able to kind of get him off rhythm and I’m really proud of our kids and how they played when it’s all said and done.”

Virginia Tech brought the North Carolina running game to a halt, allowing just 2.5 yards per carry. That often put Carolina in third and long situations, which were tough to convert in the middle of a storm. The Tar Heels were just 2-14 on third down conversions and were 0-4 on fourth down conversions.

“We mixed up some coverages on him, got some pass rush and the conditions were difficult,” Fuente said. “It was hard to throw the ball to anybody today, but I don’t want to take away from either defense’s performance today, with using the crutch of the weather. It was a combination of things, I don’t think it was one particular thing, other than we did a good job on the back end and we were able to move the quarterback around a little bit.”

The Hokies were far from perfect. Virginia Tech fumbled the ball seven times, including multiple bad snaps and the mishandling of snaps. Evans also fumbled on a quarterback-draw, while Stroman mishandled two punts. Despite all of this, the Hokies turned it over just twice.

“That’s got to be the first thing on our mind and when it is, there’s visible evidence of us taking care of the football, and a couple times we didn’t,” Fuente said. “For as many times as (Evans) touched it, he did a good job valuing the football but we’d like to have that one back.”

Virginia Tech will continue their road trip next week as the Hokies travel to Syracuse. The leaders on the team said that they will make sure the team doesn’t feel themselves a little too much.

“It’s definitely exciting,” Rogers said. “I wouldn’t say surprising, you don’t ever want to be surprised by success, knowing what you’ve worked on. You never want to be surprised and say, ‘I can’t believe this happened, we’re so fortunate,’ which we are fortunate, but we’ve also put in the work to get to this point, which is why we, the leaders on this team, the seniors, we’ve got to make sure we emphasize this week, ‘That’s what it takes to get us here. We can’t step off the gas now.’”

“I think we should be a confident football team,” Fuente said. “This certainly won’t hurt. We’ve got to understand it’s okay to smile and be happy tonight and enjoy it, but tomorrow we’ve got to turn the page. It’s just like we said after the Tennessee game. As crestfallen as we were about that, we better turn the page and get ready for the next week. That’ll be part of our message tomorrow.” 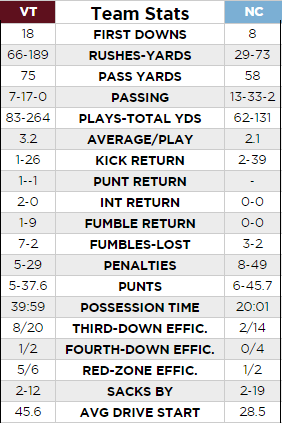 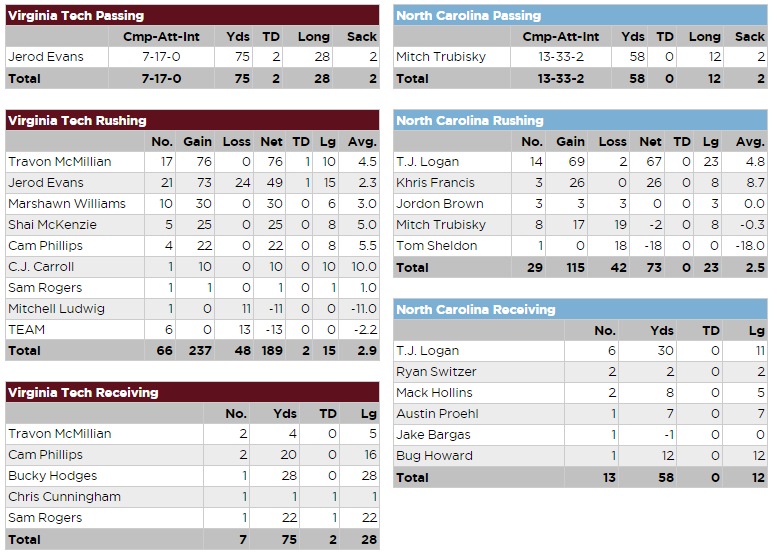