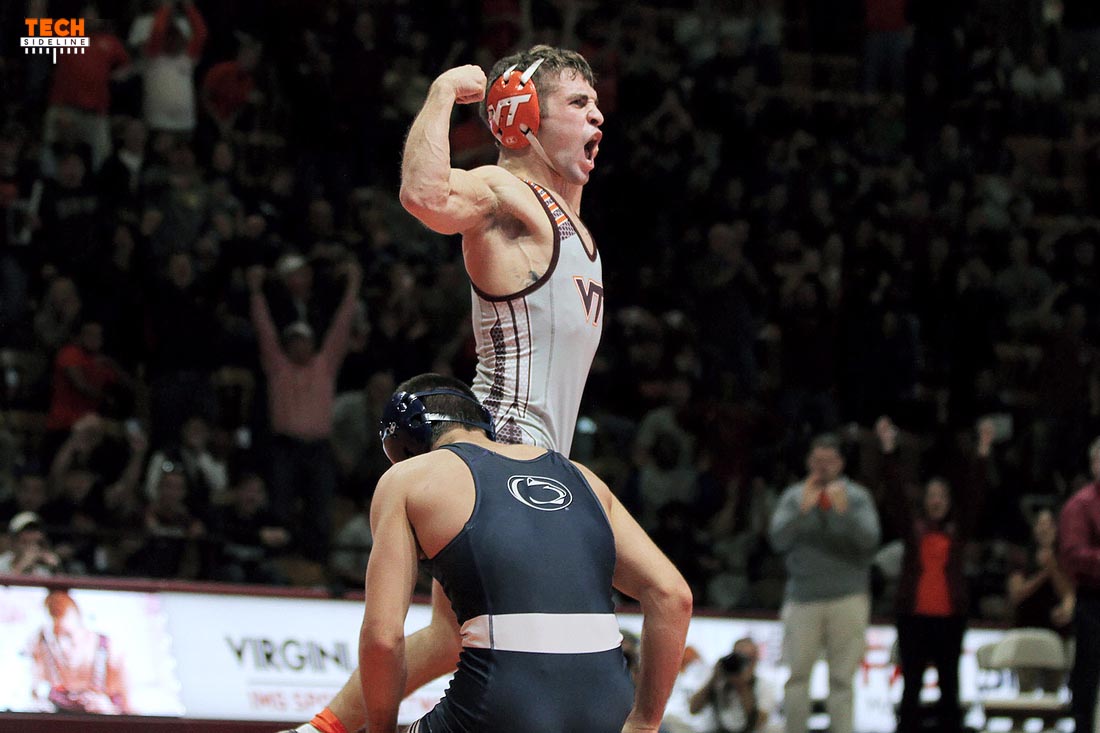 Four time World Champion wrestler Jordan Burroughs said, “Success is the peace of mind knowing that you’ve given your all into achieving a goal.”

Heading into his senior season, Virginia Tech’s Joey Dance hopes to carry the same mental framework that Burroughs talks about with the hope of ending his final year with a bang. Currently sitting with a career record of 84-17, Dance is closing in on his 100th career win, a mark that only nine other wrestlers have achieved in Virginia Tech history. While the first match isn’t until November 5th, Dance has been hard at work to become more of a leader in his senior year to those with less experience.

“Going through the summer practices, I just kind of thought to myself ‘this is the last time I’m going to be going through the workouts with my team,’” Dance said. “Especially now, I’m a leader to a lot of these guys. I really want to set a good example for them.

“You have to be real vocal with them and tell them what to do and what to expect in the upcoming season. You have to help guide them, especially through the practices, too. A lot of the freshmen come in and have no idea what they’re coming into. It’s a different breed of wrestling than high school or middle school and all that stuff. It’s definitely a grind, the practices we go through, and the year we go through.”

Dance himself was once one of the younger guys in the program receiving guidance from the seasoned veterans on the team. In fact, Dance has been associated with the Hokies wrestling program since his freshman year of high school when he committed to Virginia Tech. He wrestled at Christiansburg High School, which was also home to another of Virginia Tech’s all-time great wrestlers, the three-time All-American and National Runner-Up, Devin Carter.

“One of my buddies actually came here, Devin Carter, and I saw that and I was like, ‘ok well they might have something going here,’” Dance explained. “They ended up placing 10th in the country the year before I came so that really got me pumped up. My freshman year, when I came into his office, [coach Kevin] Dresser had my dad and I in there talking to both of us and he laid down the offer and it was a full-ride scholarship. Being a freshman in high school, you see that and you’re just like oh my God, I definitely want to take that. My dad looked at me like you better take it. I verballed right then, and Oklahoma St. was actually hard on me too around the same time, pushing me to change my mind all the way through high school, but I stayed true to Tech and I’m really glad I stayed here.

“Me and him [Devin Carter] have been really good friends since high school. I mean really just coming here and working out with him and Dresser and all the rest of the coaches has really kind of helped push me to come here even more. Him being there with me and leading me through the whole process, and that’s what I’m kind of doing with these freshmen, too. They’re coming in and they’re new to everything, so I have to guide them through it the same way Devin guided me.”

After winning the ACC Championship in the 125-lb weight class the last two years, Dance is ready to take the next step and perform his best at the highest level during the NCAA Championships. In his freshman year, Dance took the 125-lb weight class by storm at Nationals, entering the tournament as the #16 seed and finishing in fourth place. The past two years, however, have not all been roses for Dance in the NCAA’s. In 2015, Dance finished 2-2 while last year in 2016, he entered as a favorite as the #2 seed, but saw a tough end to the year, finishing the tournament 1-2 and fighting through adversity after suffering a major injury in the final match.

“Obviously my goals are bigger than an ACC title,” said Dance. “I think right now they have me ranked 2nd or 3rd country, but I believe I’m the most talented guy in the 125-lb weight class. I have beaten everyone there is to beat to be a National Champ, so I just have to do it at the right time. Being an ACC Champ is also a big thing for me too, but still wanting that National title since I’ve been so close every year.

“I had a hard end of the year last year with my ankle. I ended up partially tearing a muscle right near my Achilles. Then I had a few different sprains all in the same ankle. That was kind of hard to get through, especially going into the [National] tournament. I was the #2 seed going in and I got upset the second round and the match after that is when I got hurt. I got hurt right in the beginning of that match, and that definitely hurt me going into the summer. I’ve had a really good mindset going into the summer though. I had a little break after I got hurt and everything, and right now I’m just ready. I’m hungry, I’m ready to get back on the mat, I’m ready to go ahead and bring Virginia Tech their first National Championship title.”

Following a fourth place finish as a team at the NCAA Tournament last year, Dance and company can pack a punch as perhaps Virginia Tech wrestling’s most talented squad yet. Along with Dance, Ty Walz, Jared Haught, and Zach Epperly, among others, make up the core of the team that is the preseason #2 ranked program by WIN Wrestling.

“I think last year the big thing that our coaches preached and even the whole team preached was just having the confidence to know that we can do it, that we can actually come home with a National Championship,” explained Dance. “I think last year we did believe that, we just had some guys come up short, so this year we just have to really push through and really believe we can win a National Title because we have all the firepower to do it this year.”

The four years have come fast for Dance, but now it’s time for him to become locked in and relish his final ride in the collegiate ranks.

“I feel when I’m wrestling the best I’m having fun,” Dance said. “I’m not really thinking about how much weight I’m cutting, I’m not really thinking about how hard our practice is going to be. If I just go in with the right mindset, I just know that I’m going to have fun this year and just have a great year and enjoy every bit of it. It’s my last year, so I have to enjoy everything, every moment that comes at me this year I’m just going to enjoy it.”

Dance and the rest of the Hokies wrestling squad have the aspirations and talent to become Virginia Tech’s first National Champions, but now only time will only tell, as Dance envisions his final match ending with his hand being raised.