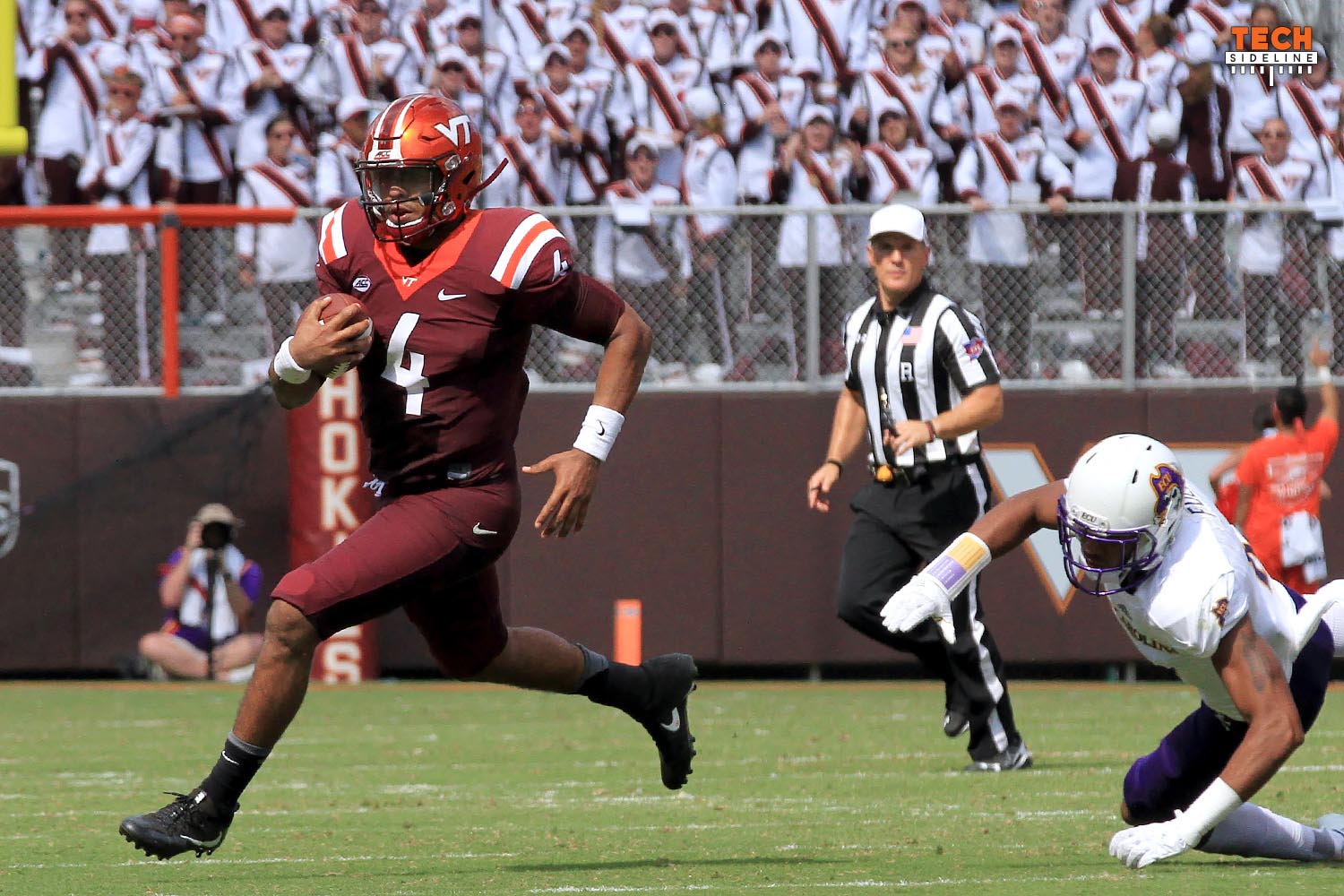 Sponsored by The Fisher Law Firm: Virginia’s DUI and Traffic Defense Firm! We have six locations in the state of Virginia: Abingdon, Blacksburg, Charlottesville, Fairfax, Richmond and Virginia Beach, and we serve all of the Commonwealth. For a free consultation call us any time, day or evening at 800.680.7031 or email us at [email protected]

1) Seeing four games of what Jerod Evans can do, how much of the “summer QB competition” was malarkey? – Justin Berkley

Chris Coleman: I always thought he would be the starter. The fact that Joshua Jackson is still getting reps shows me that the staff isn’t 100% confident with Brenden Motley as the backup. If something happened to Evans right now, we might see another competition.

I do think that Evans was destined to be the starter the whole time, but the others were given a chance to win the job. I do think the battle was extended a little longer because Fuente just wanted to keep everybody motivated, and he wanted to create competition. I understand that, especially for a guy who is trying to establish his culture in his first season.

However, I don’t know that Evans necessarily blew the coaching staff away during practice. Sometimes it’s not easy for a quarterback to separate himself in practice, and that’s particularly true at Virginia Tech this season for a few reasons…

Because of those four factors, performances are going to be up and down. Maybe it was an easy decision for Fuente, or maybe it wasn’t. I don’t know. But I’ve always thought Evans was a better fit than Motley because he’s a lot more accurate on the short to intermediate stuff (and honestly, I think Josh Jackson is too, though I want him to redshirt).

Even if Evans and Motley had performed on an equal level in practice, Evans would have been the correct choice because he’s only a r-junior, whereas Motley will be gone after this year. The only surprise was that Jackson stuck his nose in the battle towards the end, though knowing what I know about Jackson I’m not sure that’s too much of a surprise.

2) Is the ACC the best/toughest it’s been since we joined? – hokiepro

CC: I don’t think there’s any question that it’s better. Let’s look at every single team and compare them to where they were when the Hokies first joined the ACC…

More teams have improved (5) than have gotten worse (4). In the past three years, we’ve seen two ACC teams play for the National Championship, with one of them winning it. At least one ACC team has been in the College Football Playoff each year.

For what it’s worth, that’s mostly about coaching. Dabo Swinney replaced Tommy Bowden, Larry Fedora is a lot better than John Bunting, Jimbo Fisher was a major upgrade over Bobby Bowden, and Carl Franks and Ted Roof can’t hold a candle to David Cutcliffe. Bobby Petrino at Louisville is also an excellent coach, as is Virginia Tech’s Justin Fuente it seems.

Meanwhile, the SEC has not done a particularly good job of hiring coaches recently. South Carolina hired Will Muschamp, who failed at Florida. How is he supposed to win at South Carolina if he couldn’t win at Florida? Gus Malzahn at Auburn hasn’t been able to recruit or develop a quarterback. Les Miles ran his LSU offense into the ground. I’m not sold on Butch Jones at Tennessee, and I’m not sold on Kirby Smart at Georgia either. Time will tell. Sure, the SEC has more money than the ACC, but that doesn’t matter if they don’t spend that money wisely. The Dodgers and the Yankees have more money than anybody, but neither team has won a World Series in awhile.

Quarterback play is also a lot better in 2016 than it was in the early years of the ACC era. I remember some quarterbacks having horrendous days against the Hokies. That was partly because VT’s defense was great, and partly because those guys were horrendous quarterbacks. Let me point out a couple of games as examples…

Needless to say, Duke, Clemson and UNC get much better quarterback play these days, and they are all much better teams as a result. (Sidenote: in the 2008 VT-Duke game, both teams combined for seven interceptions in one of the worst college football games I’ve ever seen. Games like that sometimes make me wonder how our fanbase held out as long as it did.)

The ACC is better at the top than it has ever been, due to improved coaching and improved QB play, and the depth is fairly decent right now as well. College football is cyclical, but this is a good league right now. 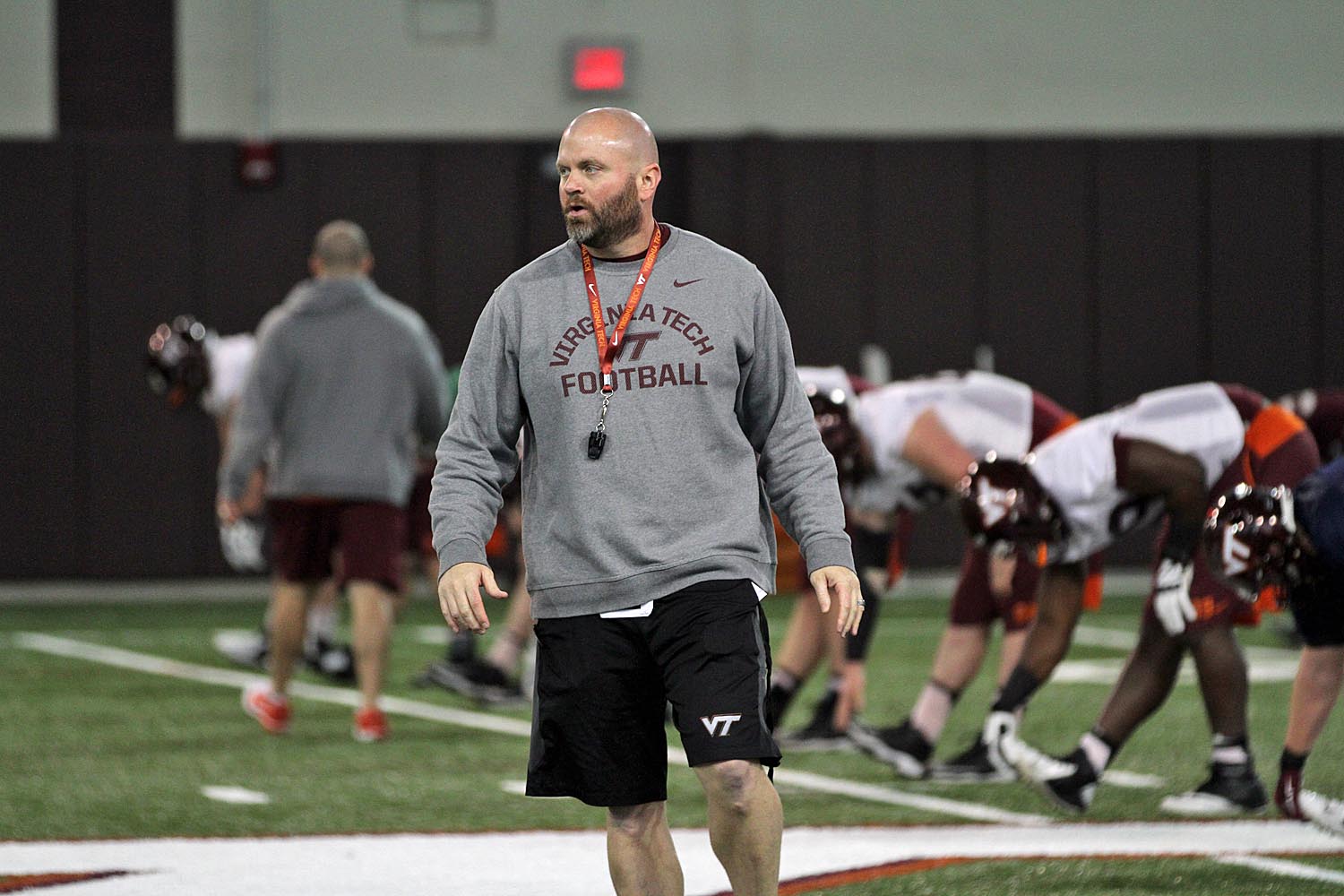 3) How pleased / displeased are you with strength and conditioning after four games? Do you see more players with hands on their hips? Do you think we’re physically dominating everyone more? How would you evaluate us, presumably, relative to last year, etc?

CC: I don’t know about how often Tech players are standing around with their hands on their hips, but from everything I can tell Tech’s new strength and conditioning program is an upgrade over what the other one turned into. Everybody who needed to gain weight gained it, and everybody who needed to lose weight lost it.

Defensively, the Hokies dominated Boston College and East Carolina in the trenches. That’s a great sign. The Eagles and Pirates flat out couldn’t block Tech. That’s no surprise with Boston College, but considering how well ECU did against VT last year, it seems we’ve made a lot of progress.

That person wasn’t necessarily talking about coaching and practicing. There are a lot of little details that go into running a successful football program, strength and conditioning being one of them, that apparently we are doing a much better job of right now than we were the last few years. I didn’t press for details, but I do believe that Ben Hilgart and his staff are playing a big role in getting these players physically and mentally ready to play on Saturdays.

Tech’s injury situation, so far, has also been pretty good. The Hokies were swarmed by injuries over the past several years. Ben Hilgart arrived in Blacksburg preaching preventative care, and so far it seems as if his strategy is working. This is the healthiest Virginia Tech has been in quite awhile.

I still don’t think we’ve seen everything this strength staff is capable of yet. They’ve only had one offseason with these players. I think in the next 1-2 years we’ll be able to tell a noticeable difference.

4) It seems as if our red zone success rate is much improved so far this year. How about a comparison to prior years and the other opponents on our remaining schedule, even at this too early stage of the season? – 1989Hokie

CC: I’ve never been a big fan of the official redzone stats kept by the NCAA. They don’t count touchdowns more than field goals, and I think that’s silly.

Instead, I’ll break out the S&P+ rankings yet again. There’s a category called “Finishing Drives” that is pretty simple: points scored per trip inside the opponent’s 40 yard line. Here are Virginia Tech’s national rankings in that category in recent seasons…

The Hokies haven’t been particularly good at scoring when they get inside the opponent’s 40 yard line in recent seasons. They are still only middle of the pack in 2016, but that represents a big leap from where they were in 2014 and 2015.

Tech’s 2016 average was hurt by their stop on downs inside the 10 yard line against East Carolina. With 9:47 left in the third quarter, the Hokies began what was to become one of their best drives of the season. Starting on their own eight yard line, VT drove all the way to the ECU three yard line with a solid mix of passing and running.

Tech faced a third and one situation from the three, and that’s a great time for a playaction pass. That’s exactly what Brad Cornselsen dialed up, and Jerod Evans nailed a wide open Chris Cunningham in the end zone…and Cunningham dropped the ball. Tech went for it on fourth down, and Evans came up short on a run, though watching the game in person I thought the spot wasn’t very good, and now that I watched the replay this afternoon I think it’s ridiculous that the play wasn’t reviewed. At any rate, the Hokies came away with zero points on that drive.

As far as a comparison to our remaining opponents, here’s how each of them rank in finishing drives…

The Hokies will face very efficient scoring teams in three of the next four games. Miami and Pitt in particular are effective inside the 40 because they run the ball so well. As I’ve written several times this week, the Hokies need to improve their running game for a multitude of reasons, and this particular metric is one of those reasons.

I think it’s accurate to say that our offense has improved inside the 40, but we’ve still got a little ways to go.

Virginia Tech has had four players appear in Major League Baseball games this season, which highlights exactly how well former head coach Pete Hughes recruited during his time in Blacksburg.