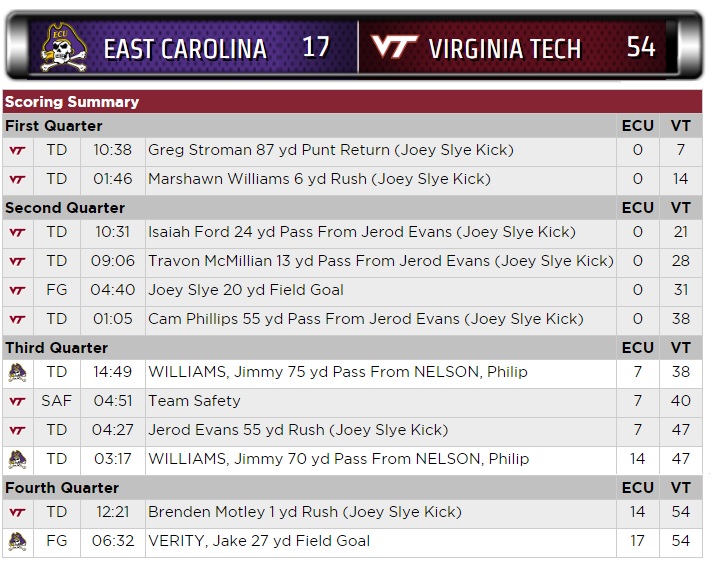 Virginia Tech’s special teams units made three critical plays, including an 87-yard punt return for a touchdown by Greg Stroman, a blocked field goal by Tim Settle and a blocked punt by Cam Phillips.

“I was happy with the way we made big plays in special teams, obviously in the first half it was a pretty big part of the game,” said Head Coach Justin Fuente. “We played really well on defense and on offense.”

The Hokies’ offense seemed to get the ball rolling after a few three-and-outs, rushing for 167 yards and throwing for another 295 yards. Jerod Evans completed 13 of 20 pass attempts, threw three touchdowns and led Virginia Tech on the ground with 97 yards on 10 carries.

“I think he’s been pretty good,” Fuente said. “He’s been pretty judicious with the ball, going to the right place most of the time. We had a couple balls I wish they had a better chance to catch today, but he made some big plays.”

Meanwhile, East Carolina’s offense didn’t show up until the second half when it was too late. The Pirates had just 145 yards on 38 plays and no points heading into halftime.

Even though the Virginia Tech offense started slow, it didn’t take the Hokies long to get on the board. After forcing a punt on East Carolina’s first possession, Stroman, who wore the honorary No. 25 this week, bobbed and weaved his way through East Carolina’s punt unit and went untouched for 87 yards and the touchdown.

“It was really cool,” Fuente said. “When I announced it to the team on Thursday, you could just see Greg light up. It meant something to him. Not that it hasn’t meant something to the other guys. I cautioned him, I said, ‘You know, I know this is important to you, but this doesn’t mean we bring kickoffs back from nine yards in the endzone and we can still fair catch punts.’ You trust him and his decision-making to do what’s best for the team.”

“I was definitely excited when he said it was mine,” Stroman said. “I talked to the return team and they were on me, ‘You got to get it in with it on.’ We really worked at it.”

Virginia Tech’s offense kicked into gear on their final possession of the first quarter. An Evans pass to Isaiah Ford for 39 yards got the Hokies all the way down to the 6-yard-line, where Marshawn Williams proceeded to finish off the drive for his first touchdown since Nov. 2014.

The Hokies really poured it on in the second quarter. East Carolina finally found themselves in Virginia Tech territory, but failed to score after Settle found his way through the line to block the 26-yard field goal attempt.

“Me and Vinny (Mihota), we kind of took the man over. Vinny got more of him than I did. He caused that lane to open up for me so I took the gap,” Settle said. “This is the most penetration I’ve got, I just took a shot and dove and put my arm out. I got it whole, I didn’t even get a piece of it. I got the whole ball.”

On the ensuing possession, Evans found Ford for a 24-yard touchdown, making it 21-0 with 10:31 left to play in the half.

East Carolina’s next possession went nowhere and to make matters worse, Phillips came off the edge to block the punt, giving the Hokies prime field position.

Fuente said after the game that it was a relief to get some big plays out of the special teams units.

“I think we had a good plan, like we’ve had a good plan each and every week,” Fuente said. “Our kids executed it really well at a high level today, in all phases. That resulted in big, big, huge, chunk-yardage plays. It’s nice to get some big plays and not just kind of do it to a draw.”

Virginia Tech took advantage of the great field position and Evans threw another touchdown pass, this time to Travon McMillian, giving the Hokies a 28-0 advantage.

On their next drive, Evans found Ford for a 45-yard completion down to the East Carolina 10-yard-line. Evans twisted his ankle on the play, but the Hokies finished the drive with a field goal, giving Tech a 31-0 lead with 4:35 left in the first half. Ford would finish the game with four catches for 117 yards and a touchdown.

East Carolina then fought their way into Virginia Tech territory, but failed on a fourth-down conversion attempt. Evans came back into the game for Virginia Tech and found Phillips for a 55-yard touchdown pass on the fifth play of the drive. Virginia Tech took a 38-0 lead into halftime.

Saturday was the second-straight week Virginia Tech got off to a hot start. In all three of Virginia Tech’s wins this season, the Hokies have outscored their opponents 83-13 in the first half.

“I think our guys are starting to learn how we want them to prepare,” Fuente said. “That doesn’t guarantee that we’ll jump out on everybody like that. I do think we have a good mindset heading into the game. We’ve got intelligent players who can make adjustments if we need to. As I see our team continue to understand what we’re shooting for or what we’re looking for, how we want to play and how we want to prepare, I hope they see the success they’re having.”

East Carolina’s offense struggled mightily. Quarterback Philip Nelson was just 7-21 in the first half for 121 yards and James Summers, who gouged Virginia Tech last season for 279 total yards and three scores, accounted for just 36 yards. East Carolina was just 1-9 on third down and 0-1 on fourth down.

“I think number one, we got them behind the sticks,” Foster said. “That gave some indicators, some pre-snap indicators that allowed us the opportunity to play anticipating football, by their stances and that kind of thing. When you get those indicators, it allows you to pin your ears back and go a little bit.”

The win puts Virginia Tech at 3-1 heading into the bye week, which should allow the Hokies to rest up before playing four of their next five games on the road, including a road game vs. North Carolina in two weeks.

“I do think it falls really well for us,” Fuente said. “We’ve got a nice break. We’ve had an emotional four-game ride here, between our first game here together, between playing in Bristol, a conference game. I think it fits perfectly for us. We’ve got a lot of things to work on.”

Evans, who played pretty well, seemed to be kicking himself for a couple overthrows that could’ve been touchdowns.

“Personally, I need to work on completing the freakin’ ball down the field,” Evans said. “I missed a couple here and there, missed a dig to Isaiah (Ford), missed him on a go route in the third quarter.”

Even though Virginia Tech has scored 87 points in two weeks, Evans said that the offense will get right back to work, trying to improve during their off week. 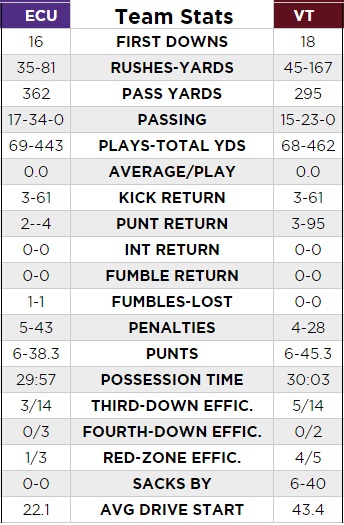 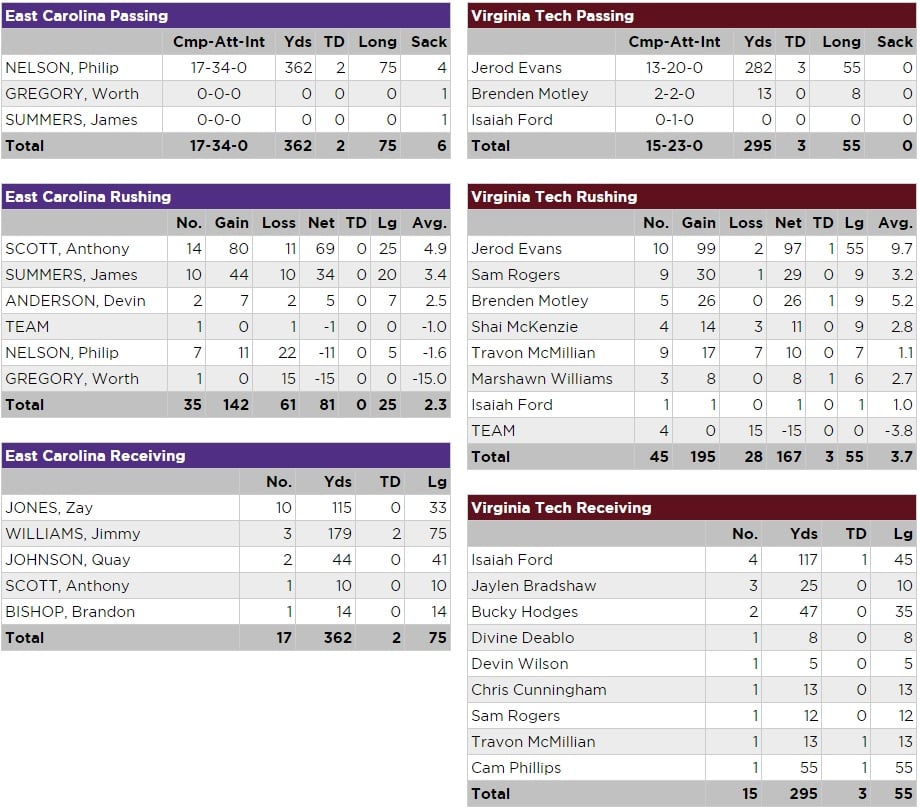