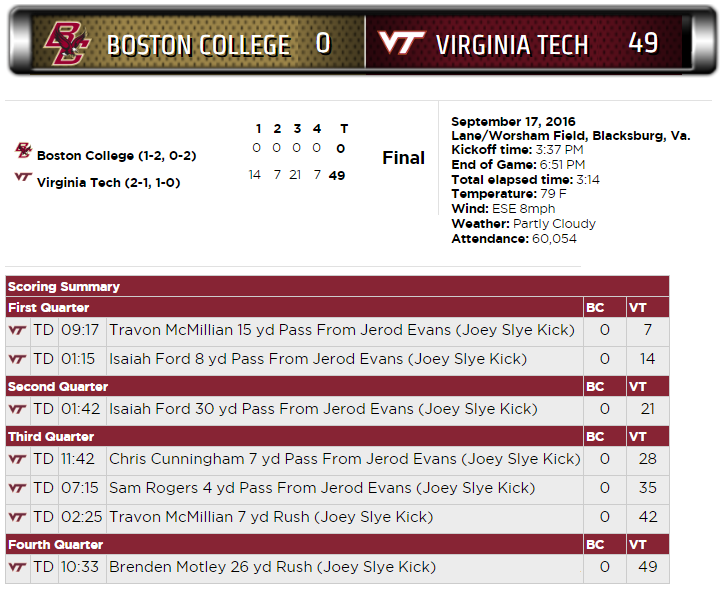 Blacksburg, VA – Virginia Tech erased any doubt of just how complete a team they can be on Saturday with a 49-0 drubbing of Boston College.

“We played pretty well today against a tough, physical Boston College team,” said Head Coach Justin Fuente. “Obviously, we did a better job, not perfect, of taking care of the football. We didn’t eliminate all mistakes but for one week, we were a more disciplined football team.”

The Hokies dominated just about every facet of the game. Virginia Tech outgained Boston College 476-124. The Hokies forced two turnovers and allowed just six first downs. It was Virginia Tech’s first shutout since 2012, when the Hokies defeated Bowling Green 37-0.

“It’s very exciting, just to get a shutout, period,” said free safety Chuck Clark. “During my whole time here, I’m not sure how many we’ve had, that might be the first one. It’s very exciting.”

“Like Chuck said, I don’t think we’ve had a goose egg since we’ve been here but just the chance to get that finally, it’s something we strive for week in and week out,” said cornerback Brandon Facyson.

Defensive Coordinator Bud Foster, who was facing off against former colleague Scot Loeffler (Virginia Tech’s offensive coordinator from 2013-2015), said that Boston College tried to catch Virginia Tech off guard with plays they hadn’t used this season, but that his familiarity with Loeffler’s scheme helped defend the pass.

“They did a couple things early that they had not shown, quarterback runs and quarterback counters, and that just goes to us having more eyes on the ball,” Foster said. “Where it really came more into play was the passing game. Just kind of got his gear of what he was doing by splits and things of that nature. We tried to mix up our coverages as far as some zone, he was running mesh routes and then we were playing some man off of it too. When Adonis (Alexander) got his pick we were in man free.”

“I thought that was going to be the key either way, how we control the ball offensively up front and how we defensively control the line of scrimmage,” Foster said. “I was really proud of our kids. I thought we had a great week of practice. As we talked about this week, if you take five plays out of last week, we really played with this kind of effort and we were just more consistently good as far as our discipline, staying home and doing the right thing.”

The defensive domination allowed Virginia Tech’s offense to take advantage of short fields and run up the score. Jerod Evans made some big plays with his arm and his legs, including a 30-yard touchdown pass to Isaiah Ford in the second quarter.

Evans threw into double coverage in the back of the end zone, but Ford hauled it in over both defenders.

“After I threw it, I said, ‘No, that ball shouldn’t have been thrown,’” Evans said. “I saw him down the first time and I said, ‘Isaiah, I should’ve went to you. This time, if I see him down, I’m coming to you.’ He came down but then went right back up. Luckily I threw a great ball for Isaiah to do a great catch.”

“Probably going to hear about that tomorrow,” Evans said.

The Hokies also had success on the ground, running for 246 yards on 50 carries. Marshawn Williams, who hadn’t played in a game since 2014, ran for 81 yards in 15 carries after entering the game early in the second quarter.

“It was unique, to see him kind of look like the old Marshawn from his freshman year, to have some of those big runs and break a lot of tackles,” Ford said.

“I liked him,” Fuente said. “I like his demeanor during the game. He’s serious but relaxed. I’ve enjoyed him in practice through two-a-days, I was excited about him. He’s a big, physical kid and an intelligent kid that picks things up quick and sees what’s going on.”

The disparity in offensive talent was on display early as Virginia Tech marched down the field on their second possession, ending the drive with a touchdown pass from Evans to Travon McMillian from 15 yards out, giving the Hokies a 7-0 lead with 9:17 remaining in the first.

Boston College’s offense struggled to move the ball for the entirety of the first half and it affected their defense. After a forced fumble by Chuck Clark that was recovered by Andrew Motuapuaka, the Hokies took advantage of the turnover and scored two more touchdowns before the break, including Ford’s catch over two defenders. Tech carried a 21-0 lead into halftime, while holding Boston College to just 92 yards of offense.

On Virginia Tech’s three touchdown drives, the Hokies started at their own 42-yard-line, their own 45-yard-line and Boston College’s 30-yard-line.

“We were getting the ball back pretty quickly, sometimes on short fields,” Fuente said. “We played good, smart football and we felt like they were going to try and get big on us and try and run the ball and kind of force feed the run game. We had to be able to handle that and not give up big plays.”

The dominance continued in the third quarter. Virginia Tech drove down the field for another touchdown, this time a pass to tight end Chris Cunningham, to take a 28-0 lead with 11:42 left in the third. It was the first catch of Cunningham’s Tech career, good for seven yards and the score.

Tech then forced another punt. The Hokies once again had great field position — Boston College’s 42-yard-line — and turned it into six thanks to a touchdown pass from Evans to Sam Rogers, making the lead 35-0.

Just two drives later, Virginia Tech added another touchdown, this time a seven-yard run by McMillian, giving the Hokies a 42-0 lead with 2:25 left in the third quarter. McMillian finished with 36 yards on 12 carries, with the touchdown.

Brenden Motley took over for the Hokies in the fourth quarter and topped off the scoring with a 26-yard-run, handing Boston College their worst defeat since 2005.

On Boston College’s next punt, Virginia Tech’s Houshun Gaines was ejected for targeting on a block on the punt return. Gaines will now have to sit out for the first half of Tech’s game vs. East Carolina next week.

“That’s the rule,” Fuente said. “It’s one of those deals, every now and again you get one of those plays that there’s not really anything that you can tell your own player. He’s not allowed to block low. I thought it was obvious that he was not trying to hit the kid in the head. But it’s one of those plays, I’ve had a couple in my career, there’s really not a lot you can be upset with him about because it obviously wasn’t intentional.”

“We’re legislating safety out there and I understand that, but when you do that there are going to be some unintended repercussions,” Fuente said.

Virginia Tech’s 49 points is the most the Hokies have scored in a conference game since 2010, when they beat Wake Forest 52-21.

Evans threw five touchdowns on Saturday, tying Bryan Randall for the most in school history. Randall threw for five TDs in a 50-42 loss at Syracuse in 2002. Fuente said after the game that Evans has matured a lot and played well in Virginia Tech’s first three games.

“I don’t pay too much attention to the numbers,” Fuente said. “I pay more attention to the grade sheet, in terms of our decisions on a play-by-play basis. He certainly made some good plays out there and missed a few. I will say this — every week, or at least the last three weeks — he’s approached it with a great mindset. It’s incredibly important to him to play well, you can see that by his preparation.”

Virginia Tech’s win was sorely needed after a deflating defeat to Tennessee in the Battle at Bristol. The Hokies jumped out to a 14-0 lead, but fumbled five times and lost 45-24. Coming into Saturday, Virginia Tech had lost nine fumbles.

“We, as a group on offense, we’re tired of fumbling,” Evans said. “Tired of seeing the same mistakes over and over. We knew if we could just hold onto the ball, regardless of how much yards we get, we can do something great. I think it’s a glimpse of what we can do, if we keep this up.”

“I can’t say enough about the leadership we have on this team,” Evans said. “It’s not just one guy that is a leader on this team. I mean you have multiple guys that are a leader. Isaiah might not talk a lot, but he’s a leader on the team. The O-line in Augie (Conte) and Jon (McLaughlin), then you got Sam Rogers, that’s a given. Then you have guys on the defense that are great leaders as well.”

With their first ACC win under their belt, Virginia Tech will host East Carolina next week at Lane Stadium. Kickoff is scheduled for 12:30 p.m, with the game televised on the ACC Network (check your local listings).

“What the win means is that we’re 1-0 [in the ACC],” Fuente said. “We won our first conference game. We’ve got a great challenge coming up with East Carolina this week that, I don’t want to say has had our number, but the last two games they’ve beaten Virginia Tech. We’re going to have to get ready to go play them.” 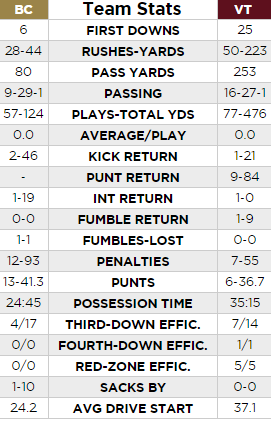 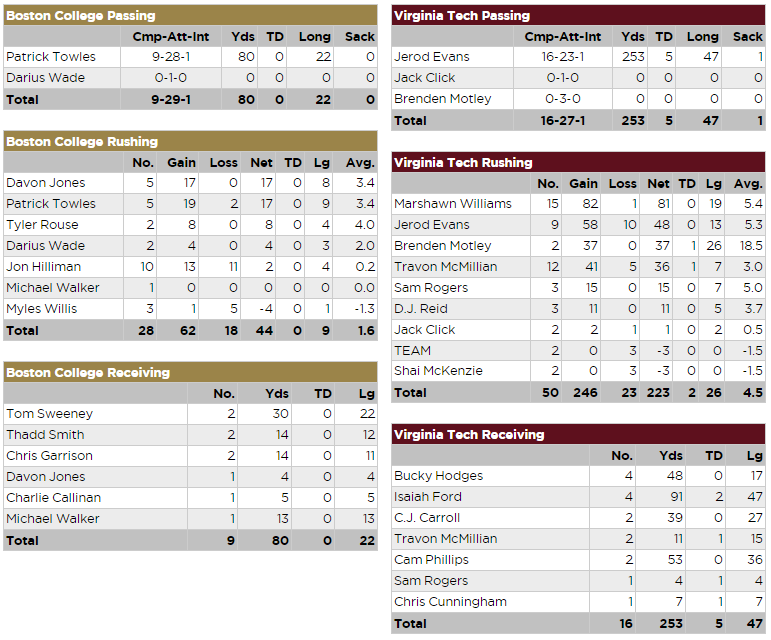