The Hokies are also hoping they return to normalcy in terms of wins and losses in Lane Stadium. Tech’s record at home against teams with a pulse has been pretty bad since late 2013. Here’s how they fared against Power 5 teams, plus East Carolina, at home since October 26, 2013…

Did you ever think you would see Virginia Tech lose at home to Duke twice in less than three calendar years?

Tech’s losing streak began on October 26, 2013, and they didn’t beat a Power 5 program until November 28, 2014 when they came from behind to beat UVA in the final seconds. They also beat NC State in 2015. Overall, that’s a 2-10 record against Power 5 (or ECU) opponents since late October of 2013. In other words, the Hokies have been brutally awful at home for nearly three calendar years, and if that trend continues Boston College will walk out of Lane Stadium with a victory on Saturday evening.

If there’s anything that will sap a fan base’s enthusiasm, it’s going 2-10 at home against teams with a pulse, especially after years of dominating at home (and on the road, for that matter). So while beating Tennessee in a neutral site game would have been nice, what Virginia Tech really needs to start doing for themselves and for their fans is winning home games against teams who can actually hit back. That starts this weekend against the Eagles.

Tale of the Tape 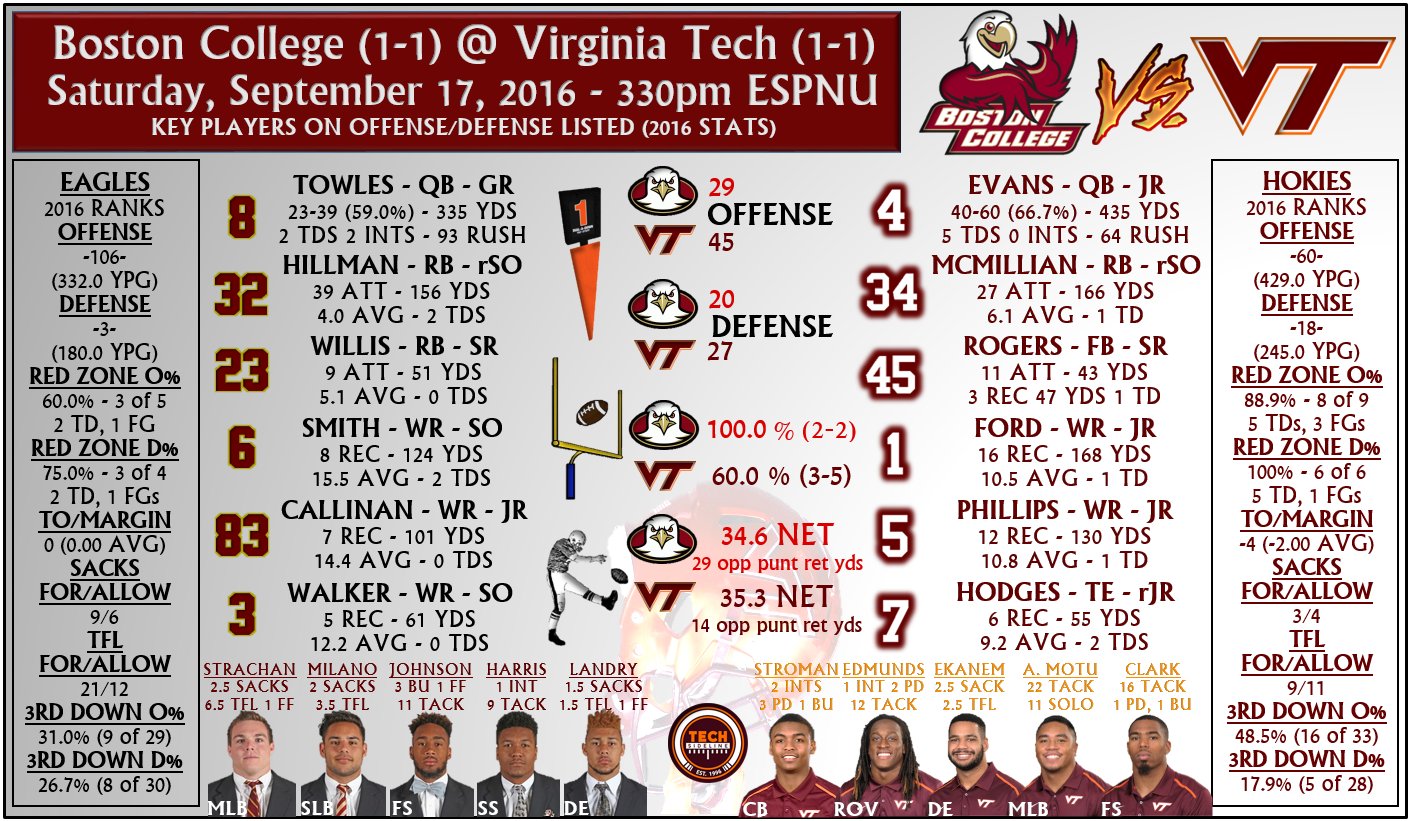 The Season So Far

Boston College is very close to being 2-0, with a 1-0 mark in the ACC. They had Georgia Tech on the ropes in Dublin, Ireland, but gave up a touchdown with under a minute left to lose 17-14. The Eagles outgained Georgia Tech 320-238 and outrushed them 176-119, but managed to lose the game. That must have been a long flight home.

BC followed up that disappointment with a 26-7 victory over UMass this past weekend to even their record at 1-1. Their offensive performance was middling, but their defense held the Minutemen to 122 yards of total offense and -23 rushing yards.

Boston College went 0-8 in the ACC in 2015, and they have not won a conference game since they defeated a 3-9 Syracuse team 28-7 back on November 29, 2014. Their next-to-last ACC victory actually came in Lane Stadium 33-31 back on November 1, 2014. As bad as Virginia Tech’s home record has been since late 2013, BC’s ACC woes have been even worse lately. Both teams really need a win to break their trend.

As usual, when Scot Loeffler enters a program as offensive coordinator, there isn’t much quarterbacking talent in the pipeline. He inherited nothing at Auburn, and while he did inherit Logan Thomas at Tech, there wasn’t much behind Thomas in the pipeline. He brought in Texas Tech transfer Michael Brewer to run the offense for two seasons, and he’s gone down the same path at Boston College.

This time Loeffler brought in Kentucky transfer Patrick Towles (6-5, 253, r-Sr.) to run his offense. Towles has plenty of experience from his days as Kentucky’s starter. Including two games at Boston College, his career numbers look like this…

Though it might seem like Towles has thrown a lot of interceptions, his rate is actually pretty low at 3.2%. That’s a better rate than Marcus Vick, Maurice DeShazo, Bryan Randall and Michael Vick, in case you’re looking for a basis of comparison.

The presence of Towles puts BC in a much better situation than they were a year ago. If you recall, the Eagles lost all their scholarship quarterbacks to injury at one point. By the Virginia Tech game, they had pulled the redshirt off walk-on true freshman John Fadule because he was literally their only remaining option. Imagine Virginia Tech losing Jerod Evans, Brenden Motley, Joshua Jackson and Jack Click to injury, with Chase Mummau serving as the starting quarterback. That’s exactly what happened to Boston College last season. I doubt Eagle fans have any patience for hearing other fan bases complain about the injury bug.

Despite the experience of Towles at quarterback, Boston College has relied on the running game through the first two weeks of the season. They use three primary ball carriers…

Overall, Boston College has run the ball 78 times (including two sacks) and passed the ball just 39 times. Considering their limitations on offense, particularly at wide receiver, and their defense’s ability to dominate, that’s probably a good decision.

That being said, even with great defensive play, you’ve got to figure that the Eagles will need to score at least 20 points to be able to beat Virginia Tech, not to mention just about every other ACC team in the modern era of college football. They only scored 14 against a Georgia Tech defense that is usually mediocre at best, and even UMass held them to 3.7 yards per carry on the ground. It’s very doubtful that they’ll be able to consistently win with their current level of offensive talent.

The BC Defense: Big, Strong, and Tough

2016 seems to be more of the same. Through two games, BC ranks #3 nationally in total defense, allowing just 180 yards per game through the first two contests. They rank #1 in the S&P+ metrics. If the Eagles hope to win football games in 2016, they are going to have to do it on this side of the ball.

Here are some stats through two games…

Needless to say, this Boston College defense is going to be a tough nut to crack.

The Eagles are great in the front seven, and in particular it’s their linebackers that are really the strength of this defense.

Connor Strachan (6-0, 237, Jr.): Stratcham is a Massachusetts native who joined the starting lineup halfway through last season, and he averaged 6.2 tackles per game. So far this year, he has 14 tackles, a whopping 6.5 tackles for loss, and 2.5 sacks.

The defensive line is anchored by All-ACC defensive end Harold Landry (6-3, 250, Jr.). Landry is from Fayetteville, NC, and he was a Top 200 prospect coming out of high school. The Eagles managed to get his signature despite the many miles between North Carolina and Massachusetts, and he’s been a great player. Last season he had 15.5 tackles for loss, 4.5 sacks, and he forced three fumbles.

Across from Landry are Kevin Kavalec (6-2, 260, Sr.) and Zach Allen (6-5, 272, So.). Those two players split time at defensive end. Kavalec has a lot of experience, while Allen has been very productive through the first two games of 2016. Kavalec made eight tackles for loss last season, and Allen has 3.5 through just two games this year. Both players are big and very capable.

Boston College is also strong inside at defensive tackle, where Ray Smith (6-1, 292, So.) and Truman Gutapfel lead the charge. Gutapfel in particular is a dangerous player, with 7.5 tackles for loss a season ago.

The Eagles have done a good job going south to recruit more athletes for their defense. Harold Landry is from North Carolina, while linebackers Matt Milano and Ty Schwab are from Florida. Four of BC’s five defensive backs who see regular action are from Maryland, Georgia and Florida.

The Eagles have a big secondary, especially cornerback Gabriel McClary. This is an experienced group of players, but they are the weakness of the Boston College defense. However, they are only a relative weakness because the front seven is so strong.

This is going to be one of the toughest matchups of the season for the Virginia Tech offense. Perhaps the toughest matchup of the season, actually. Though the Hokies will play better teams than Boston College, the Eagles have a tremendous defense, and they are a defense that has already had success against an offense that relies heavily on misdirection. They’ll be well-prepared for the Hokies on Saturday because they recently spent a lot of time preparing for Georgia Tech’s misdirection attack.

The Boston College offense doesn’t scare me. The Eagles are better than they were a year ago, and Steve Addazio and Scot Loeffler were a good combination at Florida at Temple, but they still don’t have the talent to consistently move the football and score against a decent ACC defense.

However, the BC defense absolutely scares me. They are big, tough, and smart, and they’re a tough matchup for just about anybody. This is a defense that held the Florida State offense to 217 yards a season ago. They are legit.

They’ve also already faced Georgia Tech, and they held the Yellow Jackets to 238 yards. That includes 119 rushing yards, and GT averaged just 2.7 yards per carry. Though the Hokies don’t run the spread option like the Jackets, the two offenses are similar in one big way: they rely heavily on misdirection. Boston College has already prepared for a misdirection attack when they faced Georgia Tech, and that will help them in their preparation for the VT offense. Throw in the fact that Scot Loeffler knows our offensive personnel very well, and now you understand why I’m really worried about the BC defense.

Despite that advantage, I don’t expect Boston College to be able to overcome their own offensive issues. I believe the turnover battle will actually go Tech’s way this week, and the Hokies will win the game. The home turnaround needs to start this weekend, and it needs to continue the following weekend against East Carolina.

Will Stewart’s Take: Fumbles aside, the Hokie offensive performance against Tennessee (400 yards) was encouraging in many respects, but this Boston College defense is a more challenging matchup, on paper. Any fan who doesn’t really follow things all that closely will stand out like a sore thumb on Saturday, because they’ll be yelling things like, “Come on, Hokies, move the ball! Boston College sucks!! What’s the problem?”

Just turn to them calmly and say, “They finished #1 in the nation in defense last year, and they’re #3 so far this year. They’re really good.”

But I’m not really into discussing the specifics of this matchup, beyond the obvious, “BC offense bad. BC defense good,” followed by Tim Allen-style grunting. Like Chris, I believe it’s time to draw a line in the sand, and start winning games again in Lane Stadium. We can sift over the details of how the wins happen later, but for the time being, just get it done, by hook or by crook.

The nine lost fumbles out of ten, as I pointed out on Twitter, is a bizarre stat.

One can only hope that “regression to the mean” starts occurring this weekend, and that any fumbled footballs will bounce into Hokie hands. There’s nothing like turnovers and special teams to decide what is otherwise likely to be a defensive rock fight.

I have a long-standing policy of not picking Boston College to beat Virginia Tech, ever. That’s born of a seven-game winning streak over the Eagles from 1996-2002. (Yes, I have been at this a long time.) Never mind that BC has won 6 out of 14 matchups since then, nearly 50%. I’m bullheadedly sticking to my guns.