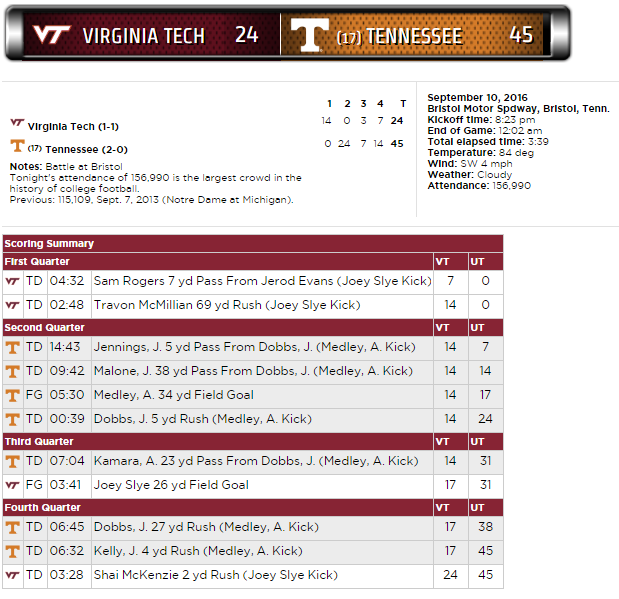 Bristol, TN — Virginia Tech will leave Bristol Motor Speedway wondering what could have been.

The Hokies made mistake after mistake on Saturday night, turning the ball over in untimely situations and digging themselves into a hole with backbreaking penalties. Those mistakes allowed Tennessee to win the Battle at Bristol rather handedly 45-24.

“I’m proud of some of the things we did today and not very happy about some other things,” Fuente said. “Obviously, we turned the ball over too many times. At times we lacked discipline out there, which is very disappointing. It falls on me.”

After the game, Jerod Evans, Ken Ekanem and Sam Rogers said that Saturday night’s loss can be traced back to a poor week of practice.

“We didn’t lose tonight,” Ekanem said. “We lost Tuesday, Wednesday and Monday during practice. Me, as a senior and all of the other seniors on the team, we have to hold ourselves accountable to get this team going and actually be productive and make better practice habits.”

“We didn’t have a great week of practice for whatever reason. I don’t know,” Rogers said. “I don’t know how we didn’t, but we didn’t and we have to fix that. Senior leaders got to step up and be more vocal on those days and make sure we get it right because no one likes this feeling. No one likes the feeling of just giving away games like this.”

“It’s a mentality of not wanting that ball to come out of your hands. Also, it’s an effort thing in practice,” Evans said.

Virginia Tech couldn’t have asked for a better start to the game. The Hokies drove down into Tennessee territory on their first possession and even though Joey Slye missed a 47-yard field goal, Tech’s offense finished off their next drive with a seven yard touchdown pass from Evans to Rogers.

The Hokie defense forced another three and out and the offense soon pounced. On the second play of the drive, Travon McMillian ran it in from 69 yards out to give Virginia Tech a 14-0 lead with 2:48 left in the first quarter.

It all went wrong on Tech’s next possession. After another Tennessee punt, Virginia Tech fumbled at their own 16-yard-line to put the Volunteers in prime position to regain momentum.  The fumble came on a mistimed snap by new center Kyle Chung, Jerod Evans and CJ Carroll, who was in motion on a jet sweep. Joshua Dobbs found Tennessee’s Jauan Jennings for a five yard touchdown.

The turnover shifted the momentum for the rest of the game. Tennessee would score 31 unanswered points. Tennessee benefited from a struggling offense and poor special teams play from Virginia Tech. Dobbs would connect with Josh Malone for a 38 yard score on their next possession. Dobbs then ran a touchdown in with 33 seconds left in the second half, giving Tennessee a 24-14 lead at halftime.

At the half, Virginia Tech had outgained Tennessee 234-182 and led in time of possession, but still trailed thanks to good starting field position for the Volunteers. On Tennessee’s last two scoring drives in the second quarter, they started from the Virginia Tech 23-yard-line and 37-yard-line, respectively. Mitchell Ludwig struggled in the punting game, averaging just 31.3 yards per punt in the first half.

“It’s a hard enough game as it is when you’re playing good people,” Foster said. “That sets you back a little bit. We had some momentum going early and they created some plays themselves and put us in a tough spot. I thought our kids for the most part played really, really hard. We gave up a couple cheap runs. It goes back to them. They executed and we didn’t.”

The rout started midway through the third quarter. Starting from their own 48-yard-line, Dobbs led his team down into Tech territory and capped off the drive with a 23 yard touchdown pass to Alvin Kamara after escaping pressure from r-freshman defensive end Trevon Hill.

Tech would kick a field goal to cut the lead to 31-17, but couldn’t get out of their own way. Mook Reynolds intercepted a pass in the beginning of the fourth quarter, but was called for unsportsmanlike conduct after the play. Tech also committed a block in the back after the interception, costing Virginia Tech 30 yards of field position. Instead of starting near midfield, Tech started the drive at their own 19-yard-line.

“I think we made a lot of mistakes,” Rogers said. “We shot ourselves in the foot continually. You can’t do that against really good teams, they take advantage of it. Against Tennessee, you can’t turn the ball over like we did, you can’t make the mistakes we did and have the penalties we did. We didn’t really give ourselves a chance when those things started happening.”

That possession ended in a fumble from Cam Phillips. After the Virginia Tech defense forced a punt on Tennessee’s next drive, Virginia Tech muffed the punt return and gave it right back. After another Dobbs touchdown, the Hokies fumbled again thanks to a bad snap by Kyle Chung, who started in favor of Eric Gallo.

“Well the one that was over the quarterback’s head, that was pretty bad,” Fuente said. “It was a performance promotion, I guess you could say.”

Starting on Virginia Tech’s 4-yard-line, Tennessee scored their last touchdown of the night, making it 45-17 with just over six and half minutes to play.

“The last touchdown really bothered me,” Foster said. “I thought we kind of went out there and just… I talked to the team about that, the defense about that, that’s not who we are. We’re going to play 60 minutes.”

Tennessee’s Dobbs, who was contained rather well by Appalachian State just a week ago, finished 10-19 for 91 passing yards and three touchdowns. Dobbs also ran for 106 yards and two scores. In total, Tennessee ran for 268 yards on 46 carries.

“He’s a pretty good quarterback. He can create a lot with his feet,” Ekanem said. “He can throw well on the run. He presented a lot of problems for us and it was pretty evident.”

“It’s just the nature of the game. You’ve got some dynamic guys with the ball in their hands and you create space,” Foster said. “We’re rushing the passer and creating some good rush and all of a sudden the guy… that’s part of it. Every Saturday you see guys doing that.”

Now, Virginia Tech must try to rebound with their ACC-opener vs. Boston College next Saturday. Evans said that he will do his best to establish a better culture in practice this coming week.

The fumbles will most certainly be a focal point of next week’s practices. Virginia Tech has lost nine fumbles in their first two games of 2016. For comparison, the Hokies lost just seven fumbles last season.

“Obviously, it’s reared its head in huge ways in the first two ball games,” Fuente said. “We’ve got to do a better job…. Obviously we have to do a better job in teaching or understanding ball security because we’re inadequate to say the least right now. We’ll look at it and come up with a plan.”

“I like the makeup of our guys. We have to get ready for a conference game next week and that’s what we’ll do,” Fuente said. “We’ve got to do a better job of preparing and ultimately playing in order to give ourselves a chance to win.”