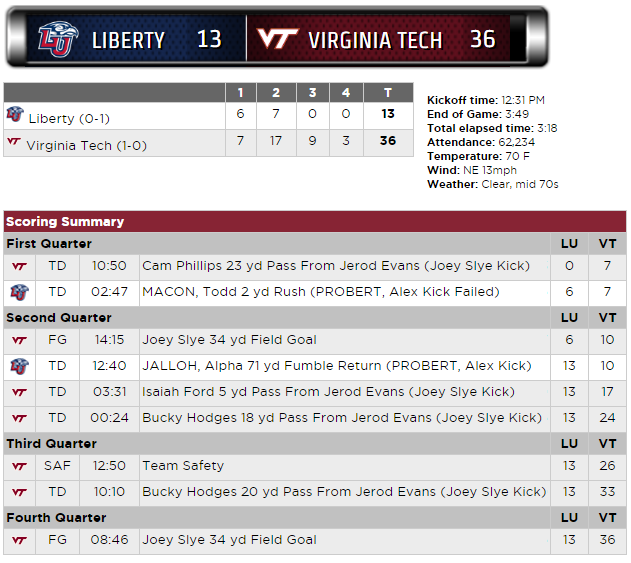 Blacksburg, VA — It certainly wasn’t pretty, but Virginia Tech started off their season on the right foot after dispatching Liberty 36-13 in Lane Stadium on Saturday.

“I’m happy to get the win,” said Virginia Tech Head Coach Justin Fuente. “We have a lot of things to get better at in all three phases of the game. By and large, we tried to play intelligent football. Obviously we made some mistakes.”

Those mistakes included five fumbles, four of which ended up in Liberty’s hands. However, Liberty’s offense scored just 13 points off of those turnovers.

Jerod Evans, who made his FBS debut for Virginia Tech, finished 20-32 for 221 yards and four touchdowns through the air. Brenden Motley came in late during the third quarter and finished the game for the Hokies, completing five of nine passes for 31 yards.

In their first game with a brand new offense, Fuente said that he isn’t quite sure how well the offense executed, but that the Hokies showed some flashes of excellence.

“To give definitive remarks about the overall execution is a little difficult,” Fuente said. “It’s obvious, anybody can tell we’ve got loads better to get to give ourselves a chance to be the type of team we want to be. At times, we didn’t run the ball very well. At times, we made big plays in the passing game. We got the ball on the perimeter a little bit, still not like I’d like to. The yards on the inside were hard to come by, which is why there were some big plays in the passing game.”

Evans and the offense started pretty well, as Virginia Tech drove into Liberty territory on their first possession. Even though Joey Slye missed the 52 yard attempt at the end of the drive, Virginia Tech took advantage of Liberty’s second straight turnover, and Evans threw a 23 yard touchdown pass to Cam Phillips for the Hokies’ first score.

That’s when the offense proceeded to struggle. Evans missed on a few passes to open receivers and the running game never got going. On Virginia Tech’s fourth offensive drive, Evans fumbled under pressure, which led to a Liberty touchdown.

The Hokies responded on their next drive with a field goal from Slye, but wouldn’t have the lead for long. A fumble from Cam Phillips led to a scoop and score for Liberty’s Alpha Jalloh, giving the Flames a 13-10 lead with 12:40 to play in the second quarter.

Virginia Tech punted on their next two drives, but then started to click on offense. Evans hit Isaiah Ford and Bucky Hodges on back to back touchdown passes to end the first half, and the Hokies took a 24-13 lead into halftime. Ford finished the game with 11 receptions for 117 yards and a touchdown, while Hodges finished with three catches for 42 yards and two touchdowns.

Liberty unraveled in the third quarter, giving up a safety on a punt return and allowing Evans to find Hodges for his second touchdown reception of the game, giving the Hokies a 33-13 lead.

Evans said that the emotions of playing the season-opener in Lane Stadium got to the offense a little early on, but that they got better as the game progressed.

Evans admitted he was far from flawless on Saturday. Evans was credited with two fumbles, including an ill-advised pitch to Shai McKenzie in the redzone, which was recovered by Liberty in the third quarter.

“That was just doing too much,” Evans said. “Trying to get everybody involved, doing too much. When I saw what I saw, with the dude going out, I should’ve just took it up the field and get what I could get.”

Fuente said that bringing in Motley to finish the game was in large part due to the Evans’ fumble on the pitch.

“It was more about that option pitch,” Fuente said. “We put Brenden in and Brenden did a good job like we expected him to.”

Even though the offense sputtered at times, it didn’t really matter. Virginia Tech’s defense forced four turnovers, including three interceptions. Liberty also shot themselves in the foot on offense on several occasions with pre-snap penalties. The Flames were flagged 13 times for 75 yards and struggled to move the ball against Defensive Coordinator Bud Foster’s defense. Liberty finished with just 160 yards of offense and was 2-15 on third down.

“It’s a good starting point for us,” Foster said. “I was pleased with how we played. We didn’t give up any explosive plays. We thought the quarterback may try to run a little bit and he did with some quarterback draws and things of that nature, but we were able to create some big plays. We were big on third down and that’s real big, particularly against a team that has some no-huddle, up-tempo types of things. All in all, I thought we did a nice job in some sudden change situations and on third down in particular. If you play against a team that last year, I think they had 11 turnovers for the season, and then to do what we did today, that was big.”

Defensive end Ken Ekanem, who registered a sack, said that it wasn’t too hard preparing for Liberty’s run-heavy attack.

“Our offense runs kind of the same plays, so there was a lot of familiarity between the two,” Ekanem said. “That got us really prepared going into this week.”

Foster said that even though the Virginia Tech offense might have made some mistakes, he’s confident the offense will figure things out.

“We’ve got some play making abilities, the way they can move the ball around and do different things, and take what the defense gives you,” Foster said. “I think that’s something we’ll continue to get better at and grow obviously as we gain experience and grow and develop. I think it’s a group with a lot of upside.”

If the Virginia Tech offense is going to reach its full potential, taking care of the ball is a must. Fuente said that Evans and the offense have to value the football more.

“Some good, some bad, that would be my first impression,” Fuente said. “We have to take care of the football. I didn’t like the option pitch, at all. First responsibility is to value the football. He did make some good plays in the passing game.”

Evans might have thrown four touchdowns, which is the first time a Virginia Tech quarterback did that since Bryan Randall against Florida A&M in 2004, but he expected Fuente to give it to him on the sideline after the fumble.

The running game will also need to improve. Virginia Tech’s running backs accounted for 115 yards on 32 carries. Travon McMillian ran for 42 yards on 13 carries, while Deshawn McClease ran for 28 yards on eight carries.

Even though none of Virginia Tech’s running backs ever seemed to get into a rhythm, Fuente said after the game that the team still wants to use several players in the running game.

“We’ll see how it goes,” Fuente said. “We like for multiple people to carry the football. Whether they’re wide receivers or running backs, H-backs, whatever it is. I can’t answer that, I’m not sure how it will go as we go through the season. Historically, there’s been plenty of balls to go around.”

The offense might not be running on all cylinders now, but it’s just week one.

“We’re looking forward to this week,” Fuente said. “You improve the most from week one to week two generally. It’s a good starting point for us and an opportunity for us to see where we need to improve.”

Here are your team and player stats for Saturday’s game. 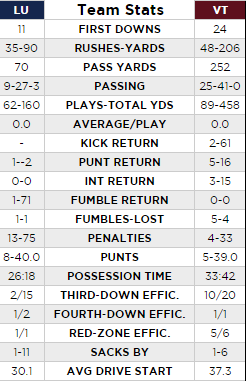 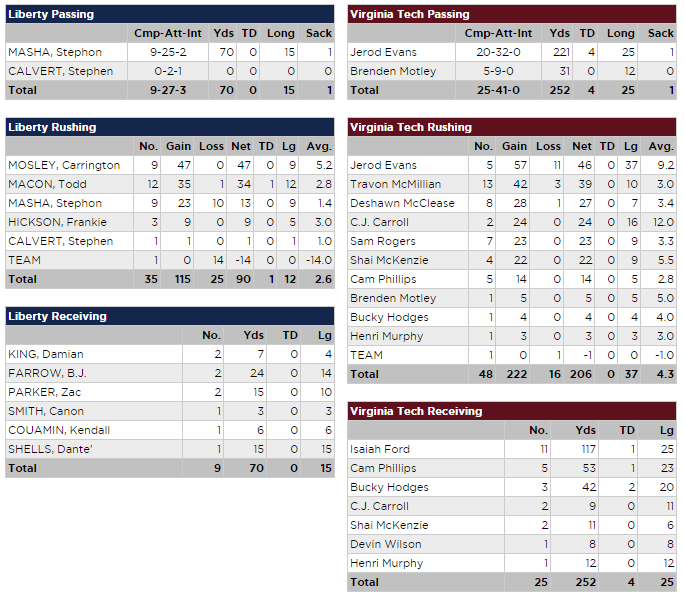