Virginia Tech Head Coach Justin Fuente made his first appearance on Tech Talk Live on Monday night, spending the last 45 minutes of the show with Jon Laaser and Mike Burnop, talking about the Hokies and where the team stands with just under two weeks before the season opener.

Fuente was joined by Director of Athletics Whit Babcock, who led off the show. Here are some of the highlights from the show.

On the ACC Network

“It will mean a good bit. When the network launches, we really feel like that will separate us and the ACC, and put us there with the Big Ten and the SEC, the way they distribute and network content. The revenue, it will be a big deal for our budget. That will certainly be nice. From a recruiting standpoint, when you can tell a young person, no matter what sport they play at Virginia Tech, every game you play or every contest will either be on an ESPN platform, whether it be television, streamed through a computer or other things. The recruiting exposure and what it does for our Olympic sports is huge too.”

Developments, plans for the next two seasons for Virginia Tech athletics

“We feel like we’re in a good position where we can play offense now. I wanted to keep the best of Virginia Tech, keep that, but implement strategic change, and hopefully we’ve done that. I feel like we’ve gotten more right than wrong.

Later this year, our fans can look for ground breaking at English Field at Union Park, the baseball stadium. That will break ground. We’ll break ground later this year on renovating Rector Field House, built in 1971 for under $500,000. I would love to have that price tag, but we’ll renovate it. We have the ACC Champion and No. 9 track team, and we want to renovate that and add on for softball in the front, and have locker rooms on one side for lacrosse. I like projects that benefit all of our sports. We certainly know from a visibility standpoint, football and basketball have to be right, but with 22 sports, they’re all important. As long as we’re wearing that logo and competing, I want us to win, and how do you tell one sport that they aren’t as important as the others?

We look to renovate the Bowman Room, some new things for us nutrition-wise, we’re even looking at some things we can do to enhance Lane Stadium, so we always have a list. Cassell Coliseum, I could go on and on.” 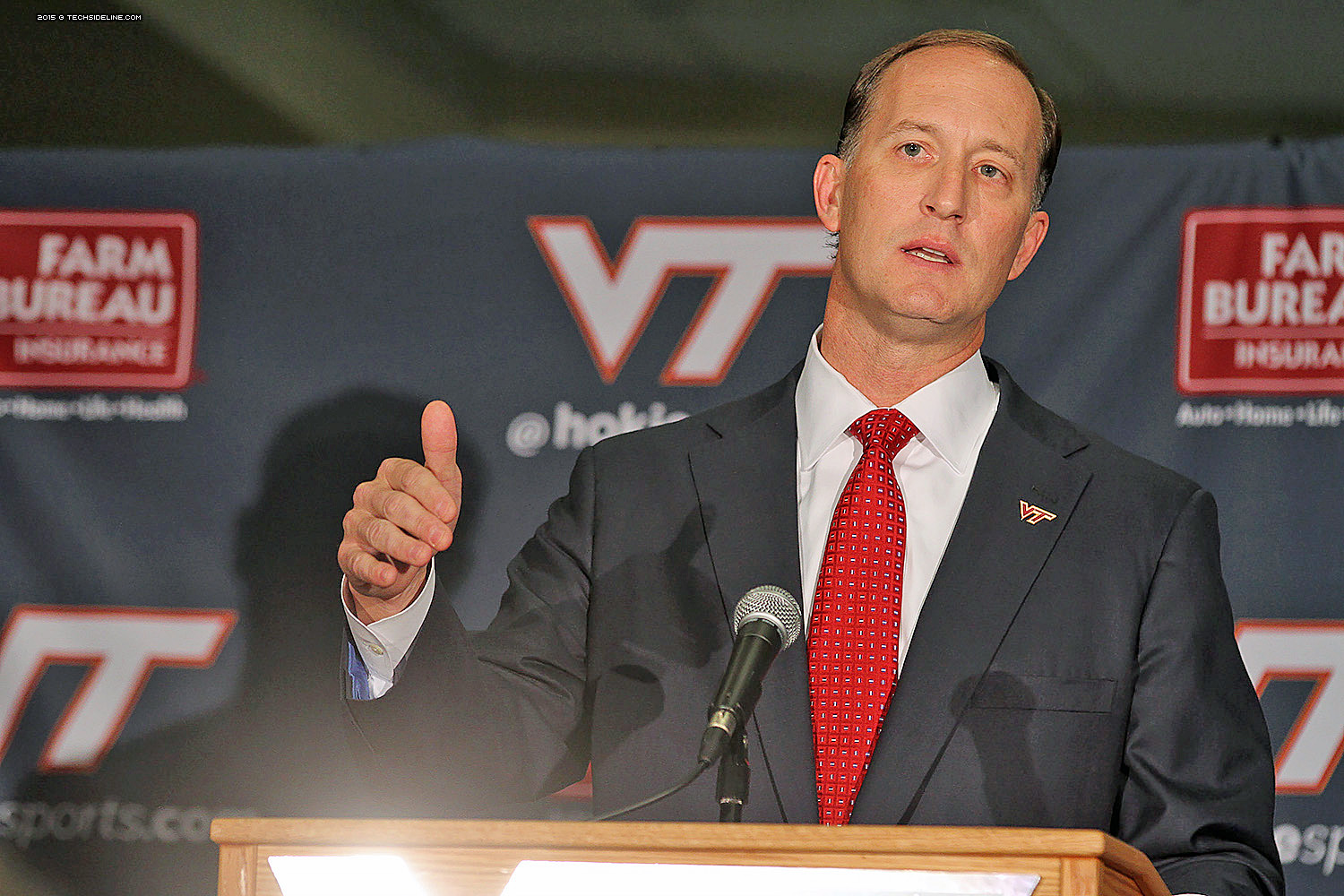 “Coach Beamer has been tremendous the whole way, and again, last year, when he talked to me saying this was it, and he did it with a few weeks left in the season, which I liked because we could celebrate him and thank you to our fans for doing that. In that meeting, he also said, ‘Whit, I also know it will give you a little bit of a running start on what you need to do,’ and I can’t imagine that there are too many coaches in the country that would do that and give that consideration. Then, to hire somebody like Justin, and his family, and the way he’s come in he’s handled it perfectly. It’s almost too good to be true. Those guys, those transitions and the respect they have for each other certainly makes my job easier.”

“When I first got hired and it was two, three years away, it didn’t seem real. It’s real now. Jim Weaver deserves a ton of credit and Coach Beamer, John Ballein and everybody that put that game together. We are the beneficiary. To put Hokie Nation on a national stage, we always want to do that and we’ll put our best part forward, but to be a part of this game in history, primetime, hopefully College GameDay will be there, I hope they will, there’s nothing better.”

Thoughts on gameday experience and plans for improvement

“We talk about a driveway to driveway experience. Wherever you’re coming from, when you get in the car to come to the game from your driveway, and you pick up (Jon Laaser and Mike Burnop) on the radio, we talk about what that’s like. Then we talk about the social media we’re doing, the traffic flow into the stadium and the parking lot, and we just follow it all the way through. Through the gate, restrooms, concessions and the game. We can’t control the game, that’s what Coach and his staff do, so we control the rest and the entertainment during the game, etc. Then, on the way home, all that. So we’re talking about customer service and how we approach it, we try to look at it from driveway to driveway. It seems to work okay. But we get plenty of feedback, and thank you for sharing that and we want to keep improving. We don’t take y’all for granted, that’s for sure.”

Whether or not Virignia Tech will consider playing two quarterbacks

“You do whatever is best for the team. If it means playing multiple guys, if it means shuffling them around, whatever it takes to get the job done is what we’re going to do, whatever we feel like give our team the best chance to be successful on Saturdays.

“I’d be curious to what they would say. I think they would say they’re surprised it took Coach that long to say it. They saw it, they see it. It’s a good group, it’s a healthy relationship amongst the three of them. Brad Cornelson has done a fantastic job handling those guys and bringing those guys along. They saw it, the other players see it. They all see those things, that guys have made improvements. Everybody wants what’s best for the team, which is a positive and a good thing. They’ve handled all those things pretty well.”

“We’ve made a big deal about trying to develop those younger kids. We had three true freshmen come to us at midterm, I’d say if was judging Divine Deablo probably made the biggest strides, maybe the most physically developed, maybe the most physically mature of those guys and is definitely going to help us this fall. We brought on Henri Murphy in the middle of the summertime, a speedster that is still making strides but I’m hopeful that as the year goes along he can continue to get in there and play a big role.

[Eric] Kumah is another freshman that came in during the midterm. We didn’t get to see much in the spring as he was a little banged up, but he has made big strides. Another bigger guy that’s physically developed that will have a chance to add some depth there and give us a bit of buoyancy there at receiver.”

“McClease is not a big in stature guy, but is a much better runner inside than maybe I perceived him to be when we started out, probably just because of his stature, he’s not a very big guy. He is a tough, hard-nosed, inside runner who had a good fall camp.”

How Marshawn Williams and Shai McKenzie have performed this offseason

“I’ve seen Marshawn play, I saw him a couple of years ago on film in the Ohio State game, he’s definitely a guy that belonged on the field against a team of that caliber and he contributed mightily to that victory. There were some flashes of that in the fall, which excited me about him. Shai is still coming along and had a solid fall.”

“Bucky is a versatile guy. He meets in both rooms, he’s met in the wide receiver room, he’s met in the tight end room. Bucky knows that for him to add value to the team he can’t just be a big wide receiver, he’s got to be able to go in there and do some of the dirty work, otherwise he is just a wideout. He’s come in and embraced that part and he’s continuing to improve so that we can be multiple with him.”

“They’re like two peas in a pod. They’re like blood brothers. They just get along so well and they know everything about each other and they do a fantastic job setting the tone for that room.”

“When recruiting offensive linemen, you want to go put them in the weight room for two years, just feed them and have them lift and then break them out for everybody to see at 21 or 22 years old. Then everybody says ‘Man, those are some big monsters.’ So I’m hopeful and optimistic that we can continue that kind of lineage of growing those guys up playing them as they get a little bit older and mature.”

“I find it humorous that people on the outside don’t understand how it could work. That’s what I get a lot outside the Hokie Nation. I think everybody at Virginia Tech understands Bud Foster and what he’s about, the type of person that he is, but people outside don’t know the quality of an individual that he is. They’re always amazed at how this possibly could work. The bottom line is, Coach Foster wants what’s best for Virginia Tech. He’s the most decorated defensive coordinator in all of America, he’s incredibly professional. It’s been seamless. He’s all in on what’s best and wants to win ball games. That’s what we we all want and as a head coach, and we’ve had this situation in different dynamics, the thing is as a staff, we have to set the precedent for the team. We have to be the best demonstration of what it is to be team, in front of the team. You can’t do that if you’re constantly managing egos or other agendas or all the other things that deteriorate corporations, football teams or private businesses. We have not spent one second in our time here dealing with those things. We have a group of incredibly professional men that want what’s best for Virginia Tech, to teach and mentor young men and ultimately find a way to win ball games.”

Depth at defensive back and linebacker

“Tavante Beckett is a guy that will have to play some at linebacker and on special teams. That’s going to take a little bit. We’ve got some really good players, I’m really excited about them, we’ve got to stack some on top of each other in some recruiting classes. I really like what we did to help ourselves in the secondary for the future, but they’re also right now trying to figure out where the library is and where their classes are.”

“Trevon Hill has made good progress to be a third end, we need to develop a fourth end and in order for us to play at a level we want to play at, that’s going to have to happen. I’m optimistic that it will happen and that we’ll get it done, it’s just going to take a little work.”

How special teams have looked during offseason

“When you’re a little bit thin on defense, it can manifest itself on special teams because of your coverage guys. We’ve got some young guys that we’ve got to bring along rapidly in order for us to play better and perform better on special teams.”

“If you had a whole team of him, you’d never lose a game. He’s that kind of guy.”

Virginia Tech has held the Commonwealth Cup for 4286 days. #Hokies