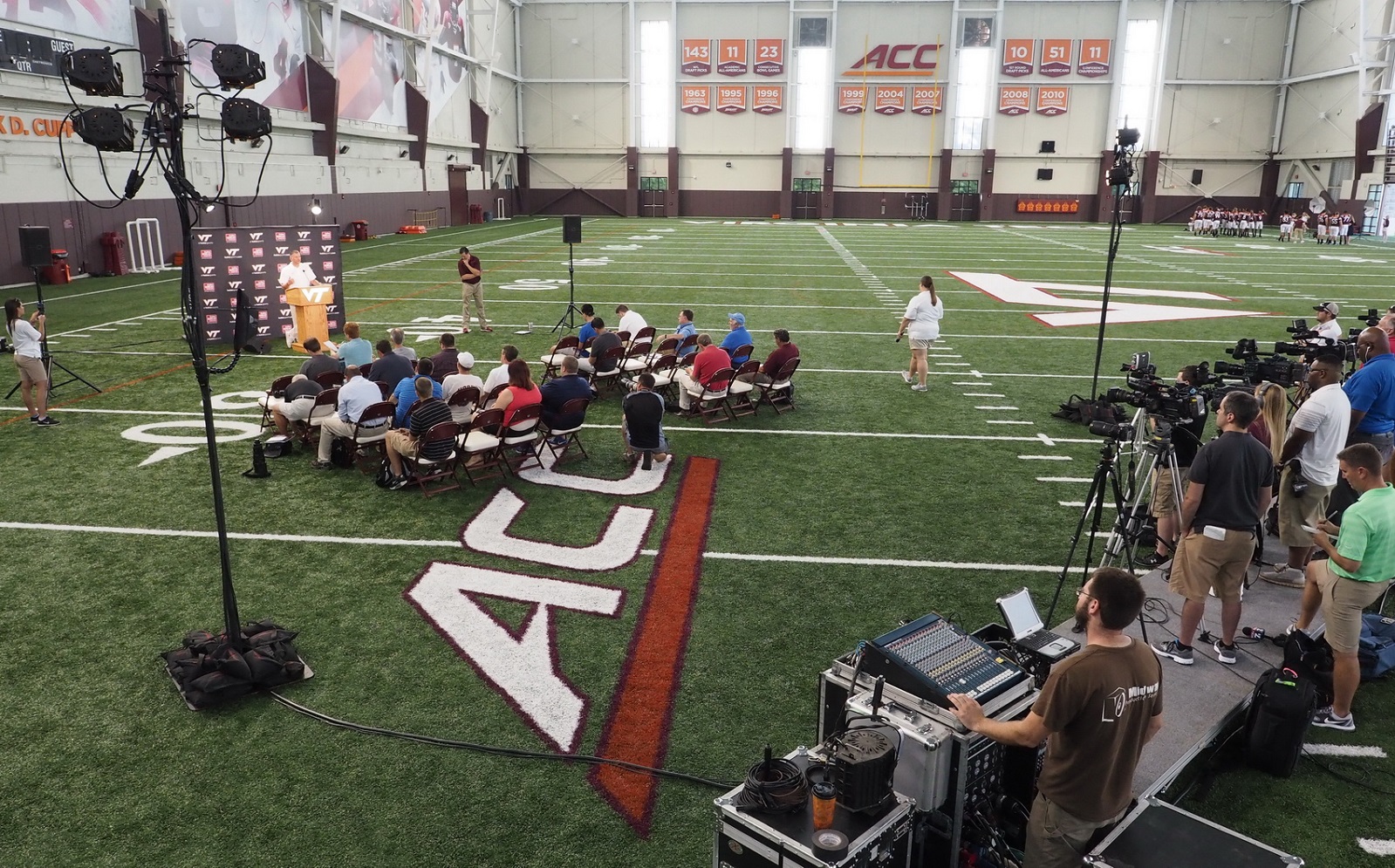 Virginia Tech held their annual Media Day on Sunday, as well as Fan Appreciation Day, as Head Coach Justin Fuente continues to prepare his team for their season-opener vs. Liberty.

Fuente reiterated that he has yet to decide on a starting quarterback. Jerod Evans and Brenden Motley seem to have separated themselves from the other quarterbacks on the roster, but not from each other. Evans said he isn’t exactly sure how well he’s performed in camp, but that he and Motley are giving it their all.

Motley, who’s entering his fifth year in the program, said that his six starts last season have helped him prepare for this season.

“It was a learning experience, just like everything else you do,” Motley said. “You get thrown into the fire, might make some things happen, but you’re also going to learn a lot from what you go through. Just like anything else in life, it was great learning. There was a lot I can take out of it and there’s a lot of things I use today because of it.”

This isn’t Motley’s first time fighting for a starting job. Even though he’s yet to break through as the starter, he hasn’t thought about ever leaving Virginia Tech.

“I wanted to be a Hokie,” Motley said. “Since I was a kid in high school, just the thought of being a Hokie. Obviously, I could have gone up and left, ran away because my coach wasn’t there anymore, but I kind of hold myself to loyalty and staying with what I believe in, fighting. I knew it wasn’t going to be easy and I didn’t want it to be. If it was easy, everybody would do it. I just wanted to stay and fight, and hopefully get my opportunity when it comes.”

The quarterback performance has been mixed so far, especially at Saturday’s closed scrimmage.

“I would say some good and some not so good,” Fuente said. “I think that is pretty on par with everyone out there. I understand the important of quarterback. I understand the curiosity behind it. That spot is very similar to a lot of spots on our team right now.”

Wilson in the mix at wide receiver

One of those spots that is open right now is wide receiver. Behind two-year starters Isaiah Ford and Cam Phillips, several players are vying for playing time at wideout. Devin Wilson, who has played for the Virginia Tech basketball team for the last three seasons, is hoping his talents from his high school days haven’t worn off just yet.

Wilson said he’s grown more comfortable with the scheme, but that he still relies on Ford and Phillips a lot.

“I’m still learning, I’m still asking them questions every single day, on how to get off jams and getting in and out of routes,” Wilson said. “They’ve been great, not being selfish and really give me advice. They’ve given all of their advice and everything they know from their experience these last couple of years. I’m thankful for them and the coaching staff for being able to help me as well.”

Wilson really hasn’t had much of a break over the last few months. He was preparing for last season with the basketball team, and worked with them from September all the way through the end of the season in March. He then decided to give football a try this spring, and has been working with the team ever since.

It’s worn on him, but Wilson says playing two sports in high school has helped him.

“Always working out, doing something, is always how I’ve lived my life,” Wilson said “This is kind of more normal. In high school, you play two sports so it’s kind of normal.”

Wilson was already athletic, but had to get in football shape.

“I was definitely undersized, coming straight in,” Wilson said. “I was about 195 and I was able to gain about 10 or 15 pounds. In the program I’m going to be around 206. I think I gained the weight that I needed in order to be successful and give myself a chance on the field. Just going through the workouts and the training process, it was a lot like basketball. The training programs are kind of similar, except they build for more bulk here.”

Wilson was a 3-star wide receiver coming out of high school, and was recruited hard by NC State. Although he ended up choosing basketball, Wilson said he’s missed football.

“Every single year, you see them running out there in front of 70,000 people, it just seems like such an exhilarating experience,” Wilson said. “Just from seeing everyone I know on the football team, like Bucky (Hodges) and guys that came in with me and how much they love it, just getting a chance to be able to play my senior year is a great experience.”

Wilson complimented the younger receivers who are battling for playing time and was optimistic about the team’s depth at that position.

“We’ve had a lot of great guys and a lot of young guys that have been stepping up, like [Divine] Deablo, [Eric] Kumah and [Jaylen] Bradshaw, we’ve all been playing very well,” Wilson said. “I think the more depth we have at wide receiver the better.”

The running back position was “wide open” according to Fuente this spring, but it seems that Travon McMillian, who finished last season on an absolute tear, is starting to get back to 100 percent. McMillian has been fighting a groin injury since the end of 2015, but said he’s feeling much better.

Not being at 100 percent made McMillian feel like he wasn’t able to put his best foot forward for the new coaching staff.

“In this transition, I wasn’t able to show (Fuente) my full potential,” McMillian said. “I’m starting to show him now.”

“I’m just here to do my job,” McMillian said. “I don’t know how many carries I’m going to be getting. I’m hoping it ranges from about at least 15-20 touches a game, somewhere around there. That’s where I would want it to be, but that’s not my decision. That’s not in my control.”

Even though McMillian might see the ball less in his sophomore season, he still says his goal is to hit 1,600 rushing yards.

“You’ve got to set your goals high,” McMillian said. “I am going to get over a thousand yards, that’s for sure. I’m just going to try my best and do my best this season and do it to the best of my ability.”

The coaching staff hasn’t shown their hand when it comes to who’s leading the competition at running back, but McMillian says that helps.

“They don’t really bring it up too often,” McMillian said. “Right now everybody is trying to get better. We’re trying to bring each other along. That’s what we’re doing right now.”