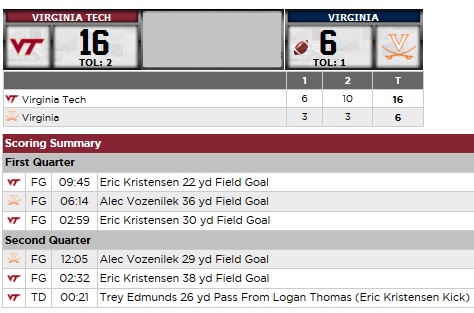 At half time of the 2013 Commonwealth Cup clash, Virginia Tech leads Virginia 16-6.

The Hokies opened by charging smartly downfield inside the Virginia ten-yard line on the strength of a 29-yard pass to Demitri Knowles and a 27-yard run by Trey Edmunds. The Hokies tried some trickery with a fullback pass from Sam Rogers to Logan Thomas, but Thomas’ knee was ruled down at the Virginia 13-yard line. He had clear sailing to the end zone, and it was questionable if his knee touched, but the refs blew it dead. Tech had six plays inside the Virginia ten yard line but had to settle for a 22-yard FG by Eric Kristensen.

Virginia responded with a 36 yard field goal by Alex Vozenilek, set up by a 38-yard completion from David Watford to tight end Jake McGee.

The Hokies answered with another field goal from Kristensen, this one a 30-yarder. It was set up by a 48-yard catch-and-run by Demitri Knowles. UVa helped the Hokies out with a facemasking call to put Tech at the Virginia 16, but a short rush by Logan Thomas and two incomplete passes led to the field goal.

Vozenilek answered with a 29-yard field goal on Virginia’s next possession, set up by a 24-yard scramble by Watford on 2nd and 10. Vozenilek’s kick tied it at 6-6 with 12:05 left in the second quarter.

Virginia forced the first three and out of the game on VT’s next possession, then committed an illegal block on the punt return to nullify what would have been great field position. The Cavaliers wound up punting, and the Hokies started their next possession at the Tech 12 yard line. Tech drove all the way down to the Virginia 21, where Kristensen chunked a 38 yard field goal inside the right upright and just over the crossbar to put the Hokies up 9-6 with 2:32 left in the half.

The game got interesting right after that. Hokie kicker Michael Branthover executed a one-man onside kick, recovering at the VT 46, and the Hokies threw deep on the next play, drawing an interference penalty. That put the Hokies in business at the Virginia 41, but on the next play, after dropping a pass, Tech’s DJ Coles flicked the ball at a Virginia defender and was whistled for a personal foul. On the next play, Logan Thomas was hit in the backfield and fumbled it away to Virginia at the Tech 34 yard line.

The Hokies stiffened and held on downs, with Virginia throwing an incomplete pass on 4th and 11 from the Hokie 35 yard line.

That put the Hokies in business with 1:04 and two timeouts to go. It took just seven plays and 43 seconds for the Hokies to score the first TD of the game. On third and 10 from the Virginia 26, Thomas waited for Trey Edmunds to break open on a crossing route and hit him with a short pass that Edmunds turned into a touchdown with two or three broken tackles. Edmunds scored with 21 seconds to go in the half to make it 16-6, Hokies.

The game was chippy, with a lot of pushing and shoving. There was an early scuffle along the Virginia Tech sideline, and a midfield wrestling match between Virginia’s Morgan Moses and James Gayle. 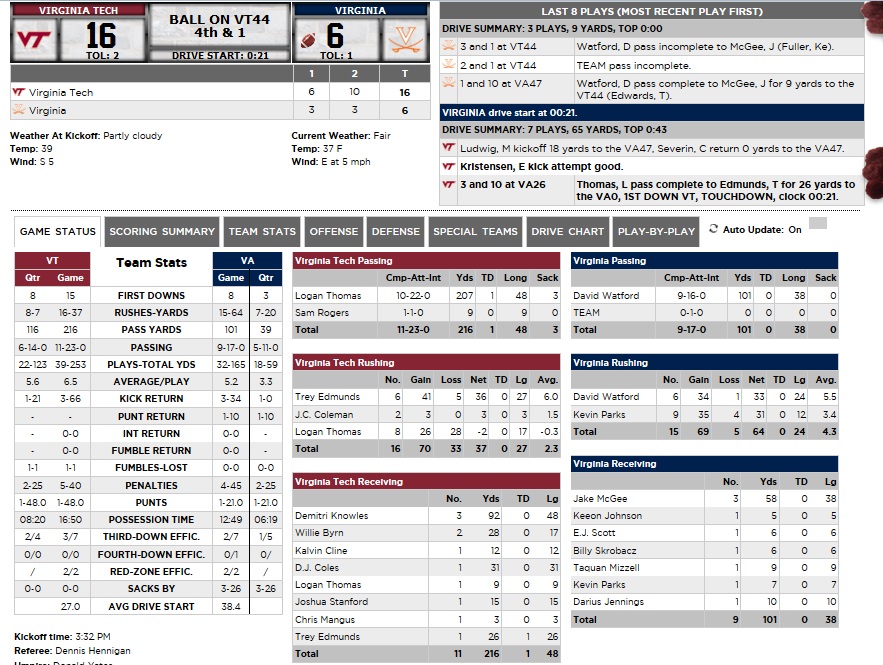 • The temperature at kickoff was 39 degrees, marking the 18th time under Frank Beamer that the Hokies played a game that was 40 degrees or colder at kickoff. Tech is 14-3 in the previous 17 games, 5-0 against Virginia. It’s the first time since 2007 that Tech and UVa played in sub-40 degree temperatures at Scott Stadium. It was 37 degrees at kickoff that day and Tech won 33-21.

• Logan Thomas started at quarterback for the 39th straight game, setting the school record for consecutive starts by a quarterback (Bryan Randall, 38).

• Freshman fullback Sam Rogers, who was a quarterback in high school, completed his first career pass in the first quarter, going to quarterback Logan Thomas. For Thomas, it was his second career catch as he had a touchdown against Wake Forest as a freshman in 2010.

• With Tech’s first score, the Hokies extended their scoring streak to 242 games, tied for the 12th-longest in NCAA Division I history. Five of the 11 streaks ahead of Tech’s are active streaks.

• Freshman walk-on Eric Kristensen made a career-high three field goals in the first half, including a career-long 38-yarder in the second quarter. His first two career attempts were last week against Maryland.

• Tech attempted just the 19th onsides kick under Beamer, recovering one for just the seventh time under him. The last time Tech recovered its own onsides kick was in 2007 against Georgia Tech.

• Trey Edmunds caught his second touchdown pass of the season, a 26-yarder near the end of the first half from Logan Thomas. The last time a Tech running back had multiple touchdown catches in a season was David Wilson in 2010, who had four.

• Demitri Knowles had 92 yards receiving in the first half. His career high is 99, coming against ECU this season.

• The two teams combined for five first-half field goals. The most combined field goals in a Tech/UVa game under Beamer is six, coming in 1994 (five by UVa’s Rafael Garcia and one by VT’s Ryan Williams). Tech lost that game 42-23.