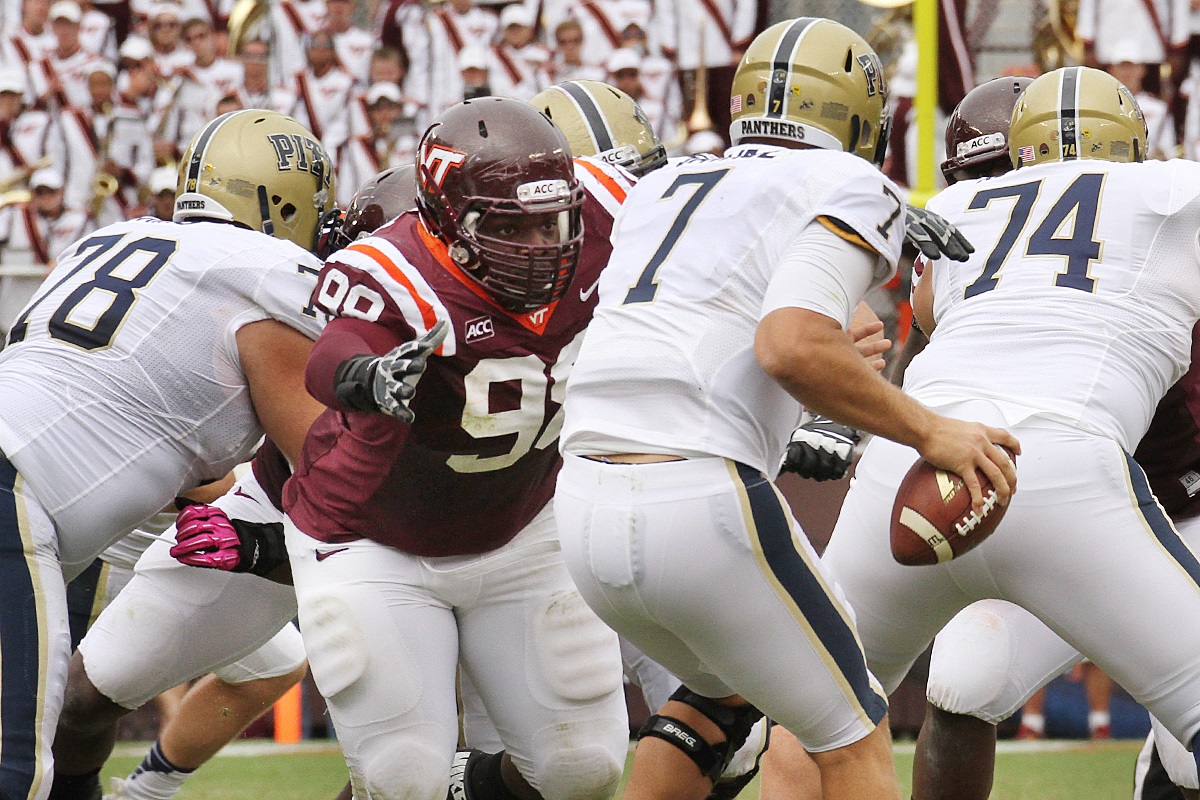 Just like they did against UNC last week, the Hokies got off to a fast start in this one, both offensively and defensively. Pittsburgh’s first three possessions were three-and-outs, and they didn’t register their initial first down until early second quarter.

Meanwhile, Virginia Tech’s offense came out crisp, driving 71 yards in 8 plays for a touchdown on their first possession. Logan Thomas was 3-4 for 55 yards and a touchdown, a 27-yard flag pass to tight end Kalvin Cline, who also had another catch for 18 yards in the possession.

Virginia Tech clearly saw a matchup they thought they could exploit with Cline, lining him up in the slot and isolating him on Pitt’s linebackers. Cline responded with three catches for 60 yards in the first half, and was targeted a few other times.

Defensively, the Hokies started out strong, giving up just 19 yards on 9 first-quarter plays by the Panthers. Meanwhile Tech had 104 yards of offense in the first quarter, which ended 10-0. Tech’s second possession ended with a  career-long 48-yard field goal by Cody Journell, who has had a rocky season so far, to say the least. Journell is now 4-7 on the year.

In the second quarter, Pittsburgh got their offense going, notching a 47-yard field goal with 14 seconds left in the half by Chris Blewitt. (We’ll wait for you to stop giggling. Done? Okay.) Pitt drove as far as the Tech 20 yard line on a 48-yard pass from Tom Savage to Devin Street, but back to back sacks by James Gayle and Dadi Nicolas pushed Pitt back to the 29-yard line, where Blewitt hit the long FG.

Meanwhile, the Hokie offense started to bog down in the second quarter. Logan Thomas is 10-of-17 for 119 yards, but he has missed some open receivers, and his receivers have also made some difficult catches to bolster his stats. Tech’s rushing attack has mustered just 27 yards, including just 18 yards from the tailbacks.

Pittsburgh had 94 yards of offense in the second quarter, giving them 113 yards at half time, on 30 plays. The Hokies have 146 yards on 32 plays. There have been no turnovers.

Dadi Nicolas and Jack Tyler lead the Hokies in tackles at the half with five each. Nicolas has seen a lot of playing time, being used by Bud Foster as a hybrid DE/LB position, lining up outside in a two-point stance. He has also played some traditional defensive end.

Pitt starts a redshirt freshman at left tackle, and Nicolas beat him for a  key sack late in the first half, but Derrick Hopkins has also been a force in the middle, registering four tackles and two of Tech’s five sacks. (James Gayle also has one, and Tyler and Nicolas shared another one.)

Meanwhile, Pittsburgh defensive tackle Aaron Donald, one of the best in the country, has just one tackle. Pitt receivers Devin Street and Tyler Boyd, both of whom average over 100 yards receiving per game, have 4 catches for 67 total yards, 48 of which came on one catch by Street to set up the field goal.

The Hokies get the ball to open the second half.

• Tech is wearing maroon helmets with maroon jerseys and white pants. Tech is 104-31 under head coach Frank Beamer in this uniform combination.

• The Hokies started in a four-wide formation with no tailback or fullback. Willie Byrn, Joel Caleb, Demitri Knowles and Joshua Stanford got the start. On defense, Josh Trimble started at outside linebacker in place of a nickel back, his first career start. It was the first game this year Brandon Facyson didn’t start.

• With Tech’s first score, the Hokies extended their scoring streak to 237 games, the 13th-longest in NCAA Division I history. Five of the 12 streaks ahead of Tech’s are active streaks.

• Tight end Kalvin Cline hauled in a career-long 27-yard pass for his first career touchdown catch. The true freshman already has a career-high 60 yards receiving at the half.

• Thomas now has 46 career touchdown passes, the third-most in school history. The record is 48 by Bryan Randall with Maurice DeShazo sitting in second place with 47.

• Senior defensive tackle Derrick Hopkins had a career-high two sacks in the first half. His previous high was 1.5 against Marshall earlier this season.

• The Hokies’ defense had five sacks in the first half, giving the Hokies 24 sacks for the season. The most the Hokies have had in a game this year was seven at East Carolina.

• Tech didn’t intercept a pass in the first half, putting its 10-game interception streak in jeopardy. 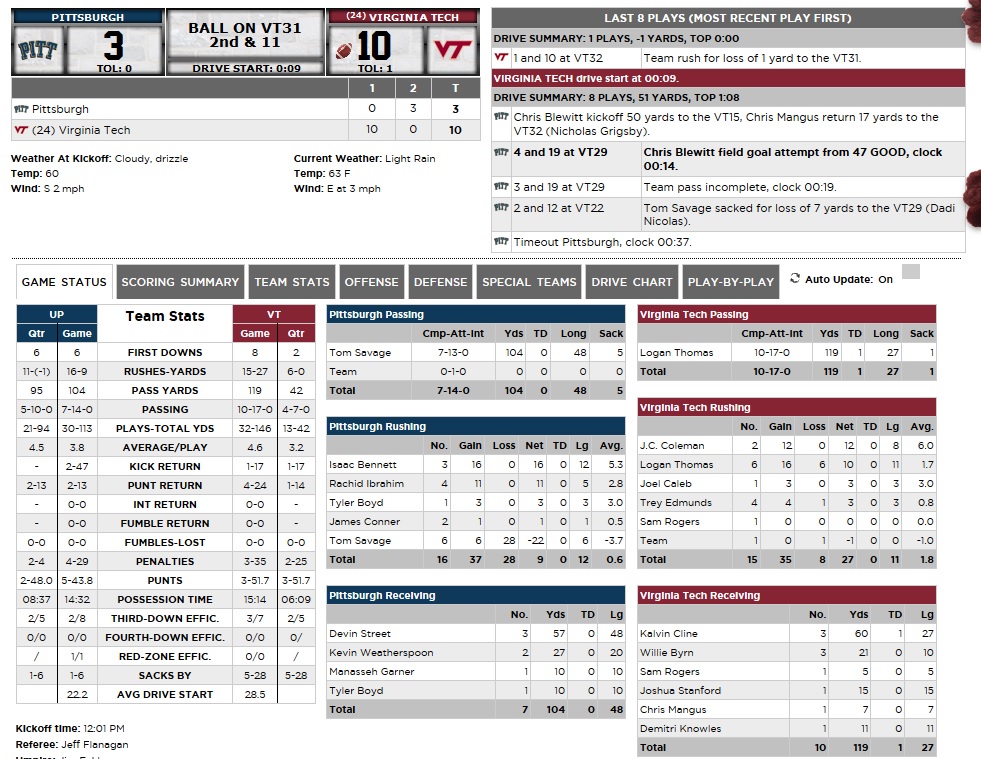