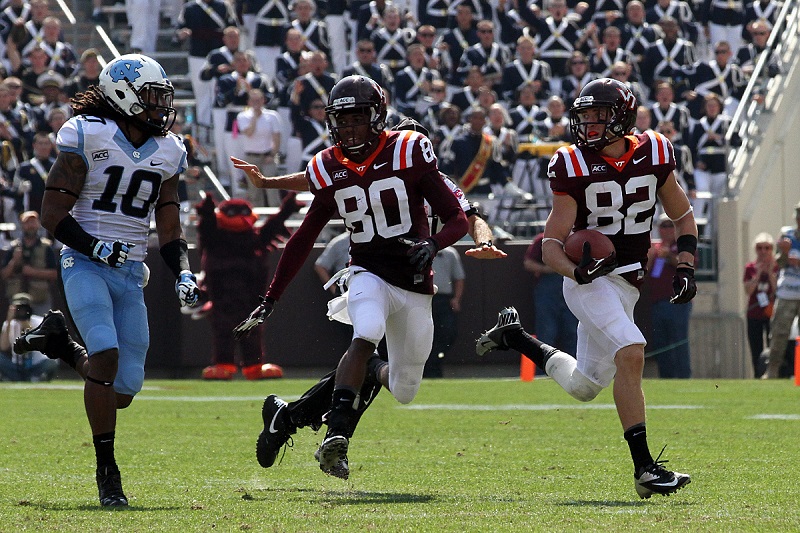 The big news at the start of the game was Bryn Renner on the sidelines in a baseball cap, and backup Marquise Williams (a one-time heavily rumored silent verbal to VT) starting at QB for the Tar Heels. That didn’t figure to be a good setup for UNC, going up against the #4 defense in the nation.

In the early going, that was the case. The Heels struggled to gain yardage via any other method than Williams running the football. Carolina picked up just 26 yards on their first 12 plays from scrimmage.

Meanwhile, after sputtering in their first two possessions, the Hokie offense was getting on track. The Hokies took a 14-0 lead on a 45-yard TD pass to Demitri Knowles and a 9-yard pass to D.J. Coles.

UNC suddenly caught fire, though, embarking on a 10-play, 75 yard TD drive to make it 14-7. Williams completed 5-of-7 for 85 yards, including a 6-yard TD pass to tight end Eric Ebron, over Kendall Fuller.

UNC later pinned the Hokies back at their 2 yard line, with 4:30 to go in the half. Thomas uncorked an 83-yard pass to Willie Byrn, who got behind the defense, caught a short pass down the middle, and turned it into a long gain, finally being tackled at the UNC 15 yard line. A few plays later, Thomas hit D.J. Coles again, this time for a 5-yard TD to make it 21-7, Hokies.

Kyshoen Jarrett picked off Williams on the ensuing UNC possession, but VT couldn’t make anything of it, and the half ended at 21-7.

Second half keys: As long as the Hokie offense continues to have success with the passing game and not turn the ball over, and the defense makes half time adjustments to deal with Marquise Williams’ skill set at QB versus Bryn Renner, the Hokies should be okay in this one.

• Tech is wearing maroon helmets with maroon jerseys and white pants. Tech is 103-31 under head coach Frank Beamer in this uniform combination.

• With Tech’s first score, the Hokies extended their scoring streak to 236 games, the 13th-longest in NCAA Division I history. Five of the 12 streaks ahead of Tech’s are active streaks.

• Senior quarterback Logan Thomas became Tech’s all-time leader in passing yardage with his third completion, a 5-yard pass to Demitri Knowles. He moved past Tyrod Taylor (2007-10; 7,017 yards) and with 230 yards in the first half, he now has 7,245 yards.

• Senior D.J. Coles hauled in his team-leading fourth and fifth touchdown passes in the second quarter. He has 11 catches on the year, five going for scores. He is the first Tech player since Marcus Davis (Duke, 2012) to catch two touchdown passes in a game.

• Willie Byrn’s 83-yard catch is tied for the seventh-longest in school history (modern era) and is the longest since Marcus Davis had an 85-yard catch for a touchdown last year at Pittsburgh. It’s the third-longest non-scoring pass play in school history.

• Thomas now has 45 career touchdown passes, moving him past Will Furrer (43) and Tyrod Taylor (44) into third place all-time at Tech. The record is 48 by Bryan Randall with Maurice DeShazo sitting in second place with 47. His three touchdown passes tie a career high, done two other times.

• Byrn has a career-high 118 yards receiving at the half, becoming the first Tech player this year to reach 100 yards receiving. Demitri Knowles had 99 yards against East Carolina this year. 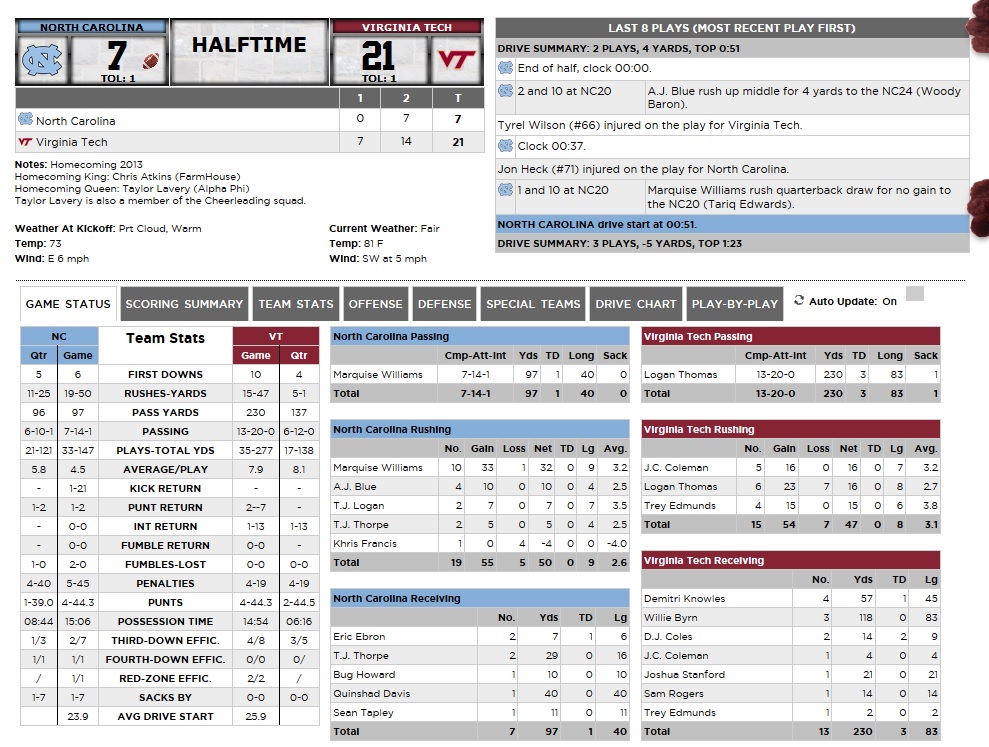