Here are your half-time stats … more thoughts after the jump. 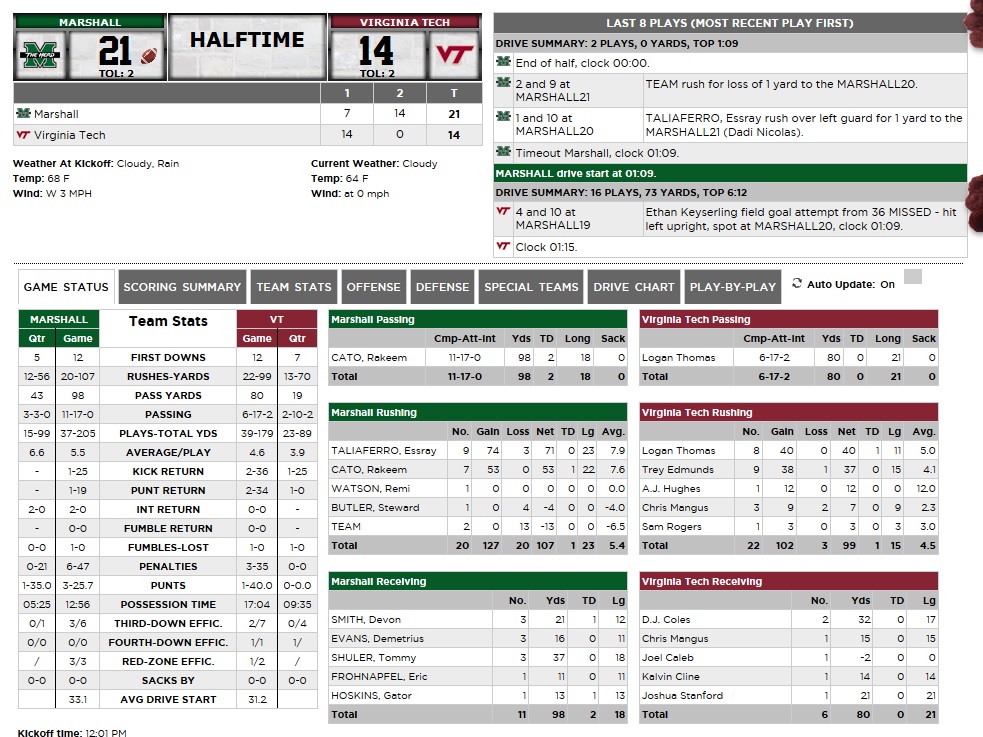 Logan Thomas and the offense, after their customary 3-and-out to open the game (every game so far this season, and probably back into last season as well), seemed to get on track for a while. They put together a 13-play, 89-yard drive that took 6:24 off the clock and put the Hokies up 14-7 at the end of the first quarter.

At one point, Thomas was 6-of-9 for 80 yards, and then the bottom fell out. His tenth pass attempt was a crossing route to D.J. Coles, who again looked tentative, didn’t fully extend himself, and let the pass bounce off his hands. Thomas threw a pick on the next pass, and it got ugly and stayed ugly: he was 0-8 with 2 interceptions in the back end of the first half, and at this time, stands 6-17 for 80 yards and 2 INTs.

This is not what the offense needed.

The offense also needed to establish the running game, and they haven’t been able to. Tech has 22 carries for 99 yards, but 40 of that is from Logan Thomas, and another 12 is from punter A.J. Hughes, who scrambled for a first down after dropping a punt snap.

The VT running backs have 13 carries for 47 yards, led by Trey Edmunds’ 9 carries for 37 yards.

Defensively, Rakeem Cato of Marshall has been as good as advertised, maybe better. As the stats above show, he has gone 11-17 passing for 98 yards and 2 TDs, and has run for 53 more yards, leading Marshall to a 205-yard half. That’s more than Tech’s last five opponents have averaged per game. More importantly, Cato and his offensive mates have avoided turnovers.

Marshall’s second TD drive was aided by two facemask penalties (Dadi Nicolas and Luther Maddy) that came on plays when VT threw Marshall for a loss.

On the possession where Hughes scrambled for a first down, VT also got some fourth-down help when Marshall interfered with Josh Stanford in the end zone on 4th and 8 from the Marshall 34. Yet the Hokies failed to convert, missing a 36-yard field goal by Ethan Keyserling. (See the note below about Cody Journell.)

Marshall put together three straight TD drives that totaled 21 plays, 198 yards, and only 7:55 of possession time.

• Tech is wearing camo helmets, white jerseys and white pants today. The Hokies wore a variation of the this combination last year, beating Austin Peay on Military Appreciation Day. The helmets and jerseys being worn today will be auctioned off next week with proceeds going to the Intrepid Fallen Heroes Fund.

• Wide receiver Willie Byrn made his first career start, but had no receptions in the first half after having seven last week.

• With Tech’s first touchdown, the Hokies extended their scoring streak to 234 games, moving into 13th place in NCAA Division I history for the longest scoring streak. Five of the 12 streaks ahead of Tech’s are active streaks. It marked just the fourth time during the streak that Tech scored on a non-offensive return before its first offensive touch of the game. The last time that happened was in 2008 against Boston College when Brett Warren returned an interception for a score on the first drive of the game.

• Logan Thomas picked up his 21st career rushing touchdown, tying him for second place at Tech all-time for quarterbacks (Bob Schweickert (1962-64). The record is 23, held by Tyrod Taylor. It was Thomas’ first rushing touchdown of the season.

• Marshall’s rushing score in the second quarter was only the second touchdown the Hokies have given up on the ground this season. The Thundering Herd’s three first-half touchdowns are the most given up by Tech’s defense in a game this year (2 vs. Alabama, 1 vs. WCU, 1 vs. ECU).

• Tech gave up more yards in the first to Marshall (205) than it did in the entire game against East Carolina last week (204).

• Cody Journell is not dressed for today’s game. Coach Beamer will make a statement after the game. Ethan Keyserling took his place.