When reviewing last Saturday’s ECU film, we noticed something odd, and so far haven’t gotten an answer as to what happened.

With 12:44 to go in the 4th quarter, Logan Thomas completed a pass to Demitri Knowles that picked up a first down on the ECU 32 yard line …. we think. Watching it live, it appeared Knowles was tackled at the 33-yard line, and that’s what the PA announcer said (for what that’s worth, which isn’t much).

In this screen shot (sorry it’s not high def), you can see that the ball is spotted closer to the 32 yard line. The yellow first down graphic from Fox Sports 1 is “out of whack” in this screen shot, so ignore it … but notice that the first down marker (far side of the field, far right of the pic) is at the 22-yard line. 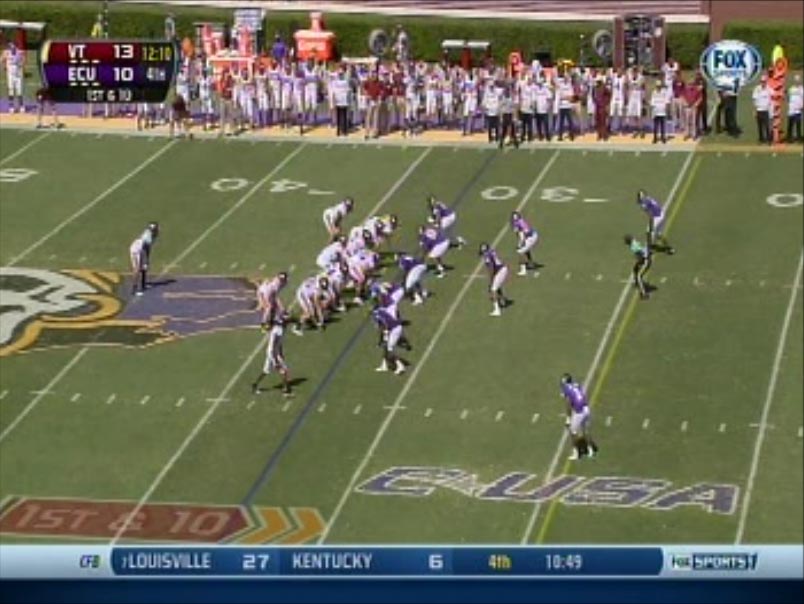 Trey Edmunds ran for three yards, setting up a 2nd and 7 at the ECU 29. Again, notice the first down marker is at the 22-yard line on the far side of the field. The yellow line now agrees with the yard marker. 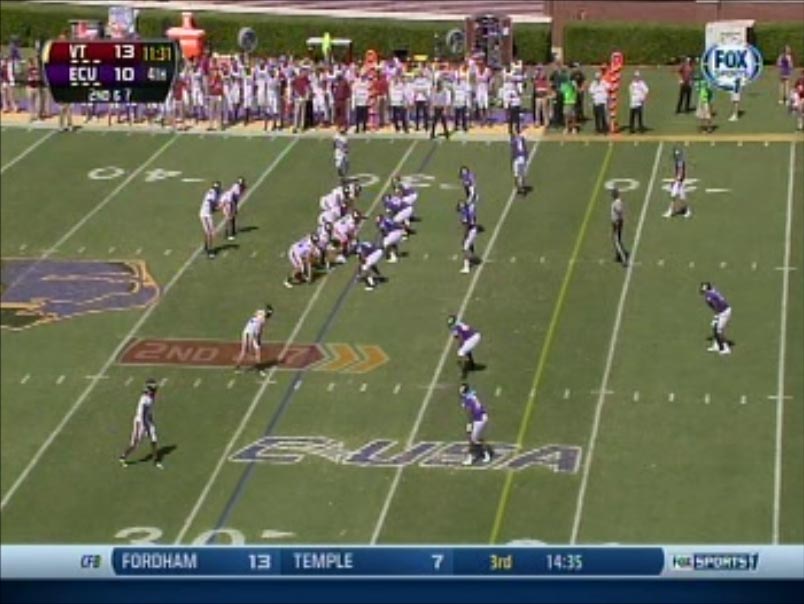 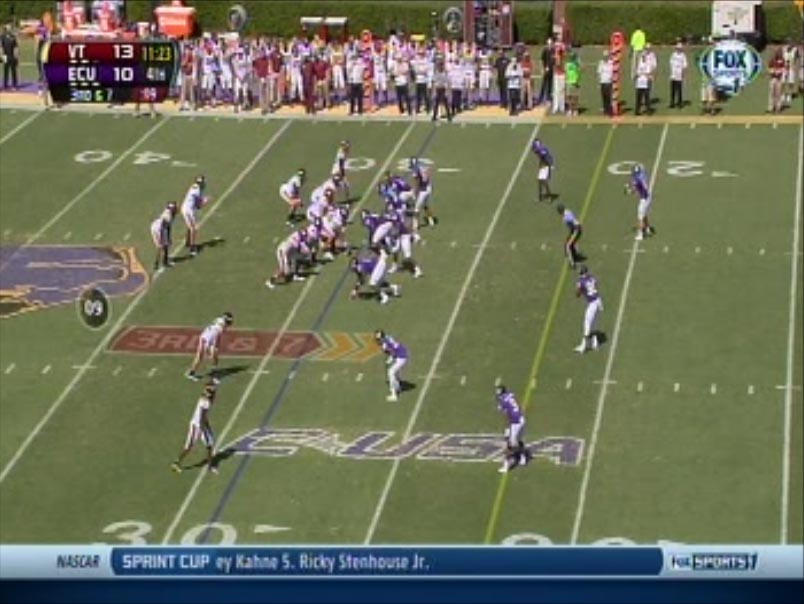 Thomas threw for six yards, setting up the 4th and 1 from the ECU 23 yard line. 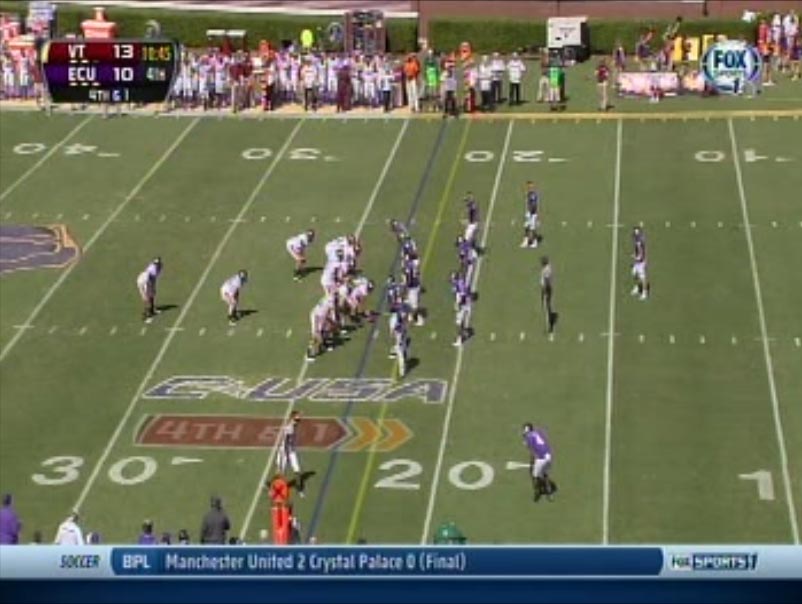 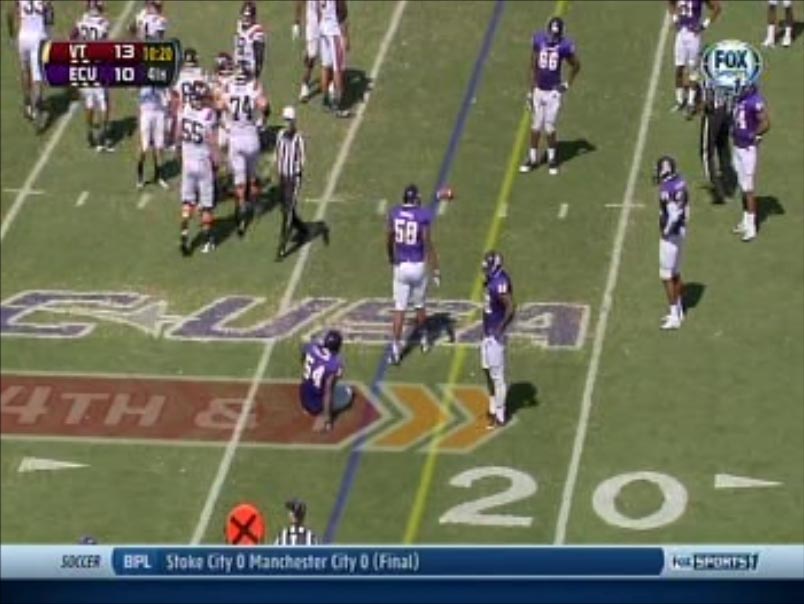 And then the refs did an odd thing: they awarded a first down to Virginia Tech. Even the announcers seemed surprised:

When the Hokies lined up for the next play, they were clearly starting from the 23-yard line. 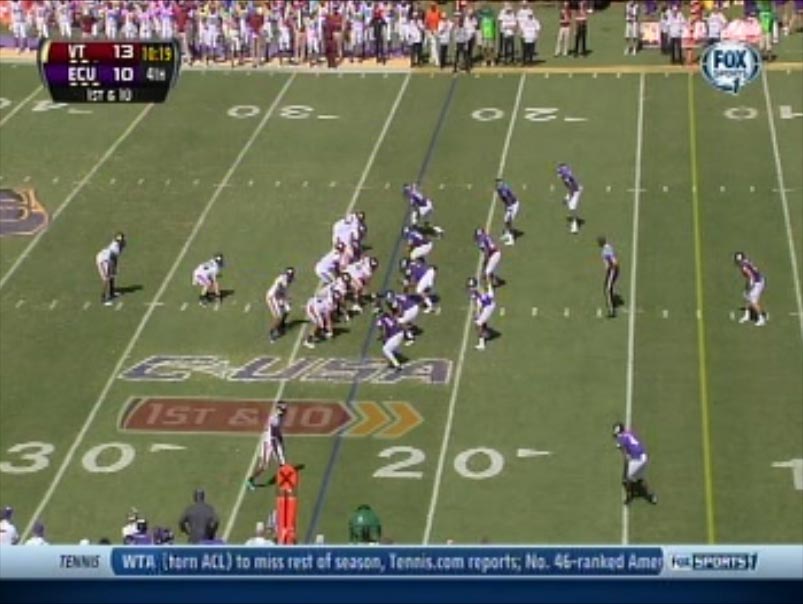 The official box score from hokiesports.com, however, lists the set of downs as starting on the 32-yard line, and Edmunds getting a first down at the 22-yard line … which isn’t where the officials spotted the ball. It’s blurry — click to see the clearer version.

The box score is mistaken for the next four plays after the mysterious first down. Looking at the film, all four plays were run from the 23-yard line, including Cody Journell’s missed field goal attempt, but the box score says the 22-yard line. The distance on Journell’s attempt was correct — 40 yards, because the ball was spotted on the 30.  But field goal distances are the line of scrimmage plus 17 yards … not 18 yards, as the box score shows.

I asked Virginia Tech Sports Information if anything was said about the Mysterious First Down — notice I’m using capital letters now — and they replied that it caused a stir in the press box when it happened, but the subject didn’t come up in any interviews this week.

I did a little research, and as far as I can tell, the yard markers that are visible in the far side of the screen caps are the only yard markers on the field. There is a line-of-scrimmage marker on the near side of the field, but not a set of ten-yard chains. So I’m stumped for an explanation.

Can any of you football eggheads out there explain this? This is either a blatant error, or what they call “a teaching moment.”