Here we go, all of us venturing into unknown territory: hosting an NCAA Regional in Blacksburg. 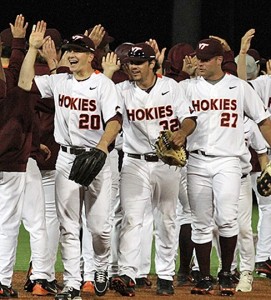 As I wrote last Friday, I’m not a baseball fan, so tapping out something on the keyboard about America’s Pastime, Virginia Tech-style, is awkward, to say the least. How awkward? Awkward enough that I didn’t even know how to spell “pastime.” At first I typed it “past time”. That didn’t look right. Then I typed it “pasttime”, and MS Word dutifully underlined it in red.

Answer: zero. Admission to Virginia Tech baseball is free. (But not this weekend, mind you. More on that later.)

Another pop quiz: how many fans does English Field seat? Lane Stadium holds about 66,000, and Cassell Coliseum holds about 10,000.

English Field holds 1,033 fans. Sort of. That’s the official capacity of the chair-backed seats at English. It also has additional terraced seating along the left field line known as “The Hill”. If you check attendance figures for Tech home games this year, you get a high of 3,389 for a March 30th game against Florida State. So, they can fit an additional 2,000+ fans somewhere.

Virginia Tech baseball is so far off the radar that if you Google “English Field capacity”, the first link that’s returned is “Translation of Field capacity in English – Babylon“. The Wikipedia entry for English Field is actually second, not first. That’s just weird.

Say you want to come see this weekend’s NCAA Regional action. How do you buy tickets online?

Well, you can’t. Probably because they’ve never sold baseball tickets for a game at English Field online, so the programming template isn’t set up to do so. If you want tickets, you’ll just have to buy them in person at the Lane Stadium ticket office Wednesday-Friday from 9 AM to 5 PM, or you can buy them at English Field on game day … cash only. You see — stop me if you’ve heard this one — they have never charged for tickets to a baseball game, so I’m guessing the credit card stations at English Field are non-existent.

(Or maybe that’s just the Virginia Tech way. They’ve been charging for tickets at Cassell Coliseum for decades, but if you want to buy a walk-up ticket to a basketball game, it’s cash-only. But I digress.)

Update: Virginia Tech rolled out an online option at 3:00 Tuesday afternoon, per this Tweet:

It’s all very awkward, but that’s okay, because most of us are all doing this for the first time. If that makes us “bandwagon fans,” so be it.

Truth be told, Virginia Tech fans are looking for something fun. It has been a dry year for fun. The football team slogged to its worst season in twenty years, a season so bad that at one point, well into the season, they were in last place in the Coastal Division (click the link for an unpleasant picture), trailing the likes of Duke.

This year has been not fun, and Pete Hughes and his bunch have provided some of the few noteworthy moments, so whether you’re a baseball fan or not, whether you know anything about the game or not, pile on. The bandwagon is never full.

Baseball is a sport everyone can get behind. Whether you know the ins and outs of strategy or not (guilty), the concepts of strikeouts, hits, and runs are easy to understand. And the drama associated with having the bases loaded late in a tight game is something anyone can grasp.

Virginia Tech is the #1 seed because they have put together the best season of the four teams that will be in Blacksburg this weekend, but what happens from Friday-Sunday (maybe Monday) is anyone’s guess. The baseball gods can be very cruel. They can also decide to smile down with good fortune. You just never know.

This is about celebrating a body of work that has already been achieved this season. The weekend may or may not go Virginia Tech’s way. If you’re interested in bigger-picture issues, the hope is that Pete Hughes, in his seventh year here, has sparked something that can be built on from here. But for now, crank up the bandwagon.