Virginia Tech and UVA will renew their rivalry tonight in Cassell Coliseum.  It’s a big ACC game for both teams.  The Hoos are 12-5 overall while the Hokies stand at 11-6.  Both teams sport 2-2 conference records, which puts them right in the middle of the pack.

Thus far in ACC play, UVA has been good at home, beating UNC 61-52 and Florida State 56-36.  However, they have struggled on the road with a 55-52 loss at Wake Forest, and a 59-44 blowout defeat at the hands of Clemson.  The Hoos are a fine defensive team, and they play at a very slow pace.  They prefer to keep the game in the 50’s.

UVA is 9-8 in basketball against the Hokies since ACC expansion.  The games are generally close, particularly last season.  Tech knocked off UVA 47-45 in Charlottesville, and the Hoos returned the favor in Blacksburg by beating the Hokies 61-59.

The coach: Tony Bennett is in his fourth season at UVA.  He led the Hoos to the NCAA Tournament a year ago.  He came to UVA from Washington State, where he made two NCAA Tournaments in three seasons, including a Sweet 16 appearance in 2008.

Virginia is a fairly deep team, though sophomore forward Darion Atkins (6-8, 222) is questionable for tonight’s game with an injury.  He could be a game time decision, along with Virginia Tech freshman forward Marshall Wood.

G Jontel Evans (5-11, 188, Sr.): Don’t let Evans’ size fool you.  He is a very tough player, and a tenacious defender.  He is very physical, and he will draw the assignment of defending Erick Green in tonight’s game.  He’s not a scorer, averaging just three points per game, but he’s a very valuable player for UVA.

F Akil Mitchell (6-8, 234, Jr.): Mitchell is UVA’s most improved player this season.  He is averaging 12.3 points and 9.1 rebounds per game.  He also leads the team with 23 steals, and overall he is a very active player.  Tech’s inside players must match his intensity and keep Mitchell off the offensive glass.

G Teven Jones (6-0, 190, r-Fr.): Jones is another young player who averages 20.8 minutes per game.  He averages only 3.5 points per game, but like most players on this UVA team, his primary objective is to protect the basketball and play good, tough defense.

Speaking of defense, that’s something this UVA team plays very well.  The Hoos are #4 nationally in defensive efficiency, #6 in opponent’s effective field goal percentage, and #4 in opponent’s floor percentage.

Tony Bennett uses the Pack Line defense, which was invented by his father Dick Bennett at Washington State.  The idea is the pack the middle of the floor, prevent dribble penetration, clog the lane, and force opponents to beat you by shooting the basketball.  You can read more about the Pack Line defense here.

A Big Game for Eddie and Brown

Obviously Virginia will be keying on Erick Green.  They will try to keep him out of the lane, which is where he is most dangerous.  Green has a very good midrange game, he finishes well around the basket, and he’s an outstanding free throw shooter.  Obviously the Hoos would rather take their chances with Green taking three pointers, because he’s nearly automatic once he gets dribble penetration.

This will be a big game for Robert Brown and Jarell Eddie.  Eddie played well on Saturday against Wake Forest, and his shot is showing signs of returning.  However, except for at the end of games, Robert Brown is struggling to make shots.  He’s been down with the flu on two occasions, and he’s completely out of rhythm right now.

Erick Green will need some help in this game.  With UVA’s excellent defense, and their slow pace, I think there’s a strong chance that they’ll hold Green to below 20 points.  That makes it vital for Brown or Eddie, or preferably both, to show up and have good shooting nights.  Virginia doesn’t have the firepower to put up a lot of points on the Hokies, but as they proved against Florida State, they can still blow teams out by playing great defense.  Hopefully Brown can shoot his way out of his slump, because his help will be needed tonight. 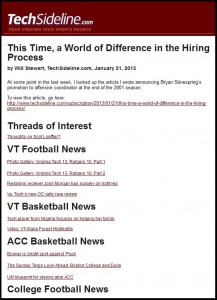 Sign up here to receive our email with links to:

To see an example of the emails we send out, click the pic to the right.

Generally, we’ll send out about one email per day, listing our latest articles. You can unsubscribe easily at any time just by clicking an unsubscribe link, and you can rejoin the list at any time.