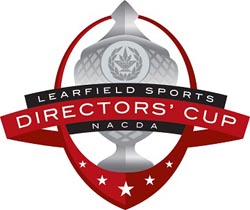 The Directors’ Cup, now called the “Learfield Sports Directors’ Cup”, is a joint effort between the USA Today and the National Association of Directors of Athletics (NACDA). It uses a mathematical formula to calculate overall performance of a university’s athletics department across all sports, and the highest score is awarded the Director’s Cup on an annual basis. Stanford University won the cup for the 2011-12 academic year, their 18th straight cup win. (The phrase “everyone else is playing for second place” truly applies here.)

Per the hokiesports.com press release:

The Hokies had 587.25 points. They received a majority of points from their men’s track and field team, which finished fifth at the NCAA Outdoor Track and Field Championships thanks largely to Alexander Ziegler winning the national championship in the hammer throw. The men’s track team finished eighth at the NCAA’s indoor meet, with Marcel Lomnicky winning the national title in the weight throw.

The Hokies’ golf, softball and men’s tennis teams also accumulated points because of those sports’ NCAA Championship appearances this past spring. The Tech men’s and women’s swimming and diving teams and the wrestling teams accumulated points this winter because of strong individual performances at the NCAA competitions in those respective sports. Both the men’s and women’s swimming and diving teams finished a program-best 18th, while the wrestling team came in 11th. Also, the football team received points for its strong play last fall.

The Hokies finished sixth among ACC schools in the Cup competition and ahead of future ACC members Syracuse and Pittsburgh. Seven ACC schools finished in the top 50.

Since 1993-94 (denoted 1994 in the following list), here are the Virginia Tech rankings in the Directors’ Cup final standings: