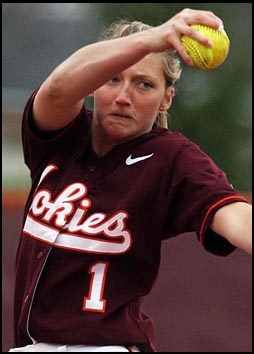 Some time within the next two months, hopefully later rather than sooner, one of the best Hokie athletes ever will finish out her Virginia Tech career. Her name is Angela Tincher, and she’s the best in the country at what she does, but in her four years and 160 games played, I’ve never seen her throw a single pitch.

I’ve always told myself that “this year” I’m going to go see a Tech baseball game or softball game. My kids are still young and would enjoy it, it’s free, and it’s more relaxed than the pressure cooker of football or basketball — at least, for the fans it is. Not so for the athletes, I’m sure.

But that same football/basketball pressure cooker ensures that every year, by the time April and May roll around, I’m spent from eight months of covering those two sports. Projects around the house have sat undone, I haven’t had a free weekend in what seems like ages, and it’s just about that time of year that the lawn starts needing attention.

So the years go by, and I don’t go see baseball and softball games.

A have a buddy that does, though. He works at a convenience store, so he doesn’t have much money. He’s a diehard Hokie, but football games and basketball games are television affairs for him, not something he can afford to see in person. So he concentrates on the other sports, the ones that only cost gas money to go see. He has seen Angela Tincher play dozens of times.

By now, unless you’re not paying attention, you know who Tincher is. She’s a senior pitcher for the Virginia Tech softball team, and she has had a career that would soon lead to millions of dollars of income, if she were playing football, baseball, or basketball. But she’s not. She plays softball, where being the best gets you a little local attention and some respect within your sport, but little else.

If you’re really good, you might make the Olympic team, and if you’re really good and photogenic — in other words, “hot” — like Jennie Finch, you can parlay a softball career into international fame and fortune, complete with celebrity status, glamour photo shoots, and endorsement contracts.

But most softball players toil in obscurity, even at schools with fan bases rabid for the money sports of football and basketball. At TSL, we often get asked to cover the Olympic sports, but time and again, traffic statistics bear out the fact that although many Tech fans are interested in the non-revenue sports, most aren’t.

Last May, for example, from May 13th to May 19th, the Hokies won the ACC softball championship and advanced to the NCAA regionals, where they won one game and lost two, eliminating them from the NCAAs. Over those seven days, we ran four softball related articles, all of them free, and they averaged just 2,368 viewings. By contrast, a free article on the state of VT athletic finances around the same time racked up almost 5,000 page views. The Hokie Hotline notes, which are football and basketball related, average 8,000 to 10,000 page views. Our best pay football articles will garner about 4,000 page views.

But I digress. The real reason for this article isn’t to ponder that one of Tech’s greatest athletes plays a sport that garners lukewarm
attention. No, the purpose of this article is to pay homage to the greatness that is Angela Tincher.

Softball is a unique sport, in that a single player, a great pitcher, can carry an otherwise average team to greatness. Unlike baseball, softball players can pitch game after game. Of Tech’s 277.2 innings pitched, Tincher has pitched 177 of them (63.7%). Last year, it was 311.2 innings out of 441.2 (70.6%). A great pitcher can be your workhorse, and Tincher has been that.

The underhand softball pitching motion doesn’t take a toll like baseball’s overhand motion does, but pitching can stress the body in other ways. As a freshman, Tincher suffered from a stress fracture caused by landing hard on her leg during her pitching motion. It limited her innings pitched to 204.1 out of 482.1.

Tech’s medical staff analyzed the problem, devised exercises to strengthen her leg, and created a special brace to take the stress off the problem area. Voila, problem solved, and Tincher pitched 256.1 out of 407.1 innings the next season. That’s when the greatness started. 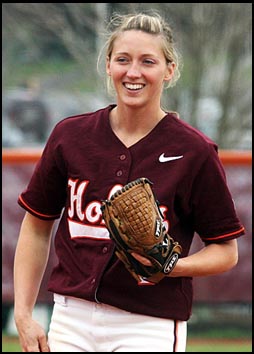 Tincher’s greatness isn’t measured just by how much she dominates Virginia Tech’s statistics and how much she elevates the team. It can be measured by looking through the 2008 NCAA Softball Record Book, which has statistics back to 1982. The record book is rife with mentions of Angela Tincher. She’s not in there for overall wins, winning percentage or ERA, but when you start perusing the strikeout records … that’s where she shows up.

Actually, she shows up right on the cover of the book. There is a collage of 13 pictures on the cover, and one of them is a shot of Tincher, decked out in a maroon Hokie uniform, ready to fire a pitch.

Back to the entries inside the book. (Get ready, because here come the numbers.) Tincher co-holds the single-game record for combined strikeouts for starting pitchers, with Jordan McPherson of Nevada. On March 3rd, 2006, the Hokies played Nevada, and the game went 11 innings, instead of the usual seven. Tincher struck out 26, and McPherson struck out 14. The 40 combined strikeouts by the two starting pitchers sit atop the NCAA records, alone in first place.

Tincher appears six other times on that list, with various other pitchers.

Tincher is third in strikeouts in a 7-inning game, having struck out 19 batters four times. (That makes sense; first place has 21 strikeouts, second place has 20, and Tincher is in third with 19.) She appears four more times on the list, with 18 strikeouts in four different games.

When you move into season records, Tincher has one that stands out: she struck out 617 batters last season, the fourth-highest single-season total ever.

Those records are impressive, but the one that intrigues me the most, and which I think is a testament to Tincher’s dominance, is the list of top single-season strikeout ratios (strikeouts per seven innings). Tincher holds three of the top 14 entries on the list, and she is about to make it four of the top 15 (more on that in a moment).

If Tincher holds that 14.7 average, she’ll post the third best single-season strikeout ratio in NCAA history, and it won’t even be close, beating #4 Monica Abbott (2007), who posted a 14.14.

The mention of Abbott’s name brings up a chance to put things in perspective. The all-time best strikeout artists in NCAA history is a small list, and Tincher is on it. There are all sorts of ways to measure strikeouts — single-game records, season records, ratios, career strikeouts, etc. — but a small handful of names keep appearing: Cat Osterman of Texas (2002-2006), Monica Abbott of Tennessee (2004-2007), Courtney Blades of Nicholls State/Southern Miss (1997-2000) … and Angela Tincher of Virginia Tech (2005-2008). When you peruse the record books for strikeouts, those four pitchers are the best.

Add in Tincher’s 376 strikeouts this season (giving her 1,846), and she is already third in career strikeouts. She’ll finish there, far ahead of #4 Courtney Blades. Tincher was the only active player in the top 25 in career strikeouts going into 2008, so there isn’t anyone on the horizon who is going to catch her and unseat her any time soon.

If you have concentrated this far, and absorbed all those numbers, you get the point: When it comes to strikeouts, Angela Tincher is one of the top three pitchers in the history of NCAA softball, since they started keeping records in 1982.

Here’s your perspective: Imagine if Virginia Tech had one of the top three quarterbacks or running backs in the history of college football. We would have a Heisman Trophy winner on our hands (perhaps multiple times) and would be subjected to a media crush we haven’t seen since Michael Vick roamed these parts. Or imagine if the Hokie men’s basketball team had one of the top three scorers in the history of college basketball. The Naismith Award would have made at least one stop in Blacksburg, maybe more.

Angela Tincher isn’t just good, she’s great, as in all-time-history-of-NCAA-softball great. I don’t know about you, but I’ve really got to get over to Blacksburg and watch a softball game.

VOTE
FOR ANGELA IN THE LOWE’S SENIOR CLASS AWARD BALLOTING!